For Immediate Release
Office of the Press Secretary
November 13, 2003

THE PRESIDENT: I have the job of nominating people to serve on the federal benches. I have handled my duty in the right way to picking superb men and women to serve our country as federal judges: people of integrity and honor; people of high intelligence -- three of whom are with me today. Carolyn Kuhl, Janice Brown, Priscilla Owen really represent the best of the America -- superb, superb women. 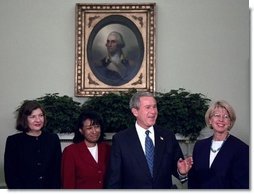 And yet, these three women are being denied a chance to serve on the bench because of ugly politics in the United States Senate. These folks deserve an up-or-down vote on the Senate floor. If they get an up-or-down vote on the Senate floor, they will be confirmed because the majority of justices believe they should serve. And yet a few senators are playing politics. And it's wrong, and it's shameful, and it's hurting the system.

I have told these three ladies I will stand with them till the bitter end because they're the absolute right pick for their respective positions. And the senators who are playing politics with their nominations are acting shamefully. And I want to thank you all for being such stalwarts for justice and fairness and decency. And I appreciate you standing here.

Q Mr. President, could you tell us your ideas about you would like to see -- speed up the transfer of power in Iraq? Are you interested in setting up, for example, an interim government before a constitution is written?

Q Mr. President -- what's your timetable for deciding on whether to lift the steel sanctions? And how far do you think the U.S. industry has gone now in restructuring toward --

THE PRESIDENT: Well, that's exactly what I'm reviewing now. Part of the -- the decision was based upon the International Trade Commission's finding that our industry had been harmed. And therefore, I imposed some tariffs in order to allow for a restructuring of the industry. I'm in the process of reviewing the extent to which the industry has been restructured. I'm going to make a decision within a reasonable period of time.

THE PRESIDENT: I couldn't tell if you wanted to ask a question or not today. (Laughter.)

THE PRESIDENT: Is this about the judges?

Q I would -- if I had time, I would. What are you prepared to do about the fact, and how worried are you about the fact that ordinary Iraqis appear to be more irritated with the presence of U.S. troops and more supportive of Iraqi insurgents?

THE PRESIDENT: Well, first of all, the goal of the terrorists -- whether they be Baathists, or mujahideen fighters, or al Qaeda-type fighters -- is to create terror and fear amongst average Iraqis -- is to create the conditions where people are just so fearful for their lives that they cannot think positively about freedom. That's their goal.

Our goal, of course, is to continue to work with those Iraqi citizens who understand that freedom is a precious commodity, those who understand that there is a hopeful life possible, in a part of the world where a lot of hope has been diminished in the past. And that's the struggle -- that's the struggle. And we're going to prevail because, well, one we got a good strategy to deal with these killers.

Two, I believe, by far the vast majority of Iraqis do understand the stakes, and do want their children to grow up in a peaceful environment, and do want their children going to a school, and do want to be able to live a free life that is prosperous. That's what I believe. And I -- recently, I was told by -- for example, Bremer was telling me about a survey done by an American firm in Baghdad, for example; and it said that by far the vast majority of people understand that if America were to leave and the terrorists were to prevail in their desire to drive us out, the country would fall into chaos. And no one wants that. And so I'm confident we'll prevail in the long run. And I'm confident we're doing good work right now.

THE PRESIDENT: Are you going following up on the judges?

Q Yes, well, the Democrats say they have confirmed 98 percent of your judges.

Q And by focusing on the few that they are opposing, that you're picking essentially an unfair fight.

THE PRESIDENT: Well, our circuits -- circuit courts remain in some cases dangerously vacant. And here are three cases where people are being treated unfairly. My question is, why won't they give these three ladies an up-or-down vote? Where's the justice? These are eminently qualified people. These are three women who are -- represent the best of American jurisprudence. And why won't they let them come to the floor? If they're so fair, bring them up to a vote -- today. Let these three nominees get onto the floor of the United States for an up-or-down vote, and then -- and then I will listen to whether or not they're fair or not.

Yes, last question, then I've got to go.

Q Are you concerned, Mr. President, that the massive amount of protesters that are going to be in London next week will undercut your message of unity in Iraq?

And secondly, I don't expect everybody in the world to agree with the positions I've taken. But certainly, those should agree with the goals of the United States, which is peace and freedom. You see, we believe that freedom is not America's gift to the world, we believe freedom is the Almighty's gift to everybody in the world. We believe free societies are peaceful societies. We believe in human justice and human dignity and human rights.

We cry when we hear stories about people being tortured. Women being raped in rape rooms. We weep when we discover mass graves of innocent Iraqis. We understand that tyranny is not the form of government that will bring hope and justice. And therefore, we're not only willing to defend our own security, we're also willing to defend the rights of others.