For Immediate Release
Office of the Press Secretary
November 12, 2003

THE PRESIDENT: Good morning. I'm proud to welcome members of the diplomatic corps and my administration, and, of course, Lord Robertson, the Secretary General of NATO, to the White House. I've been honored to host Lord Robertson here at the White House many times over the past three years. I'm grateful that he's come once more before he leaves his post.

The Presidential Medal of Freedom is our nation's highest civil award, given to individuals of exceptional merit and integrity. For Lord Robertson, it is a fitting tribute to his long and distinguished career of service to his nation, to our alliance, and to the world. 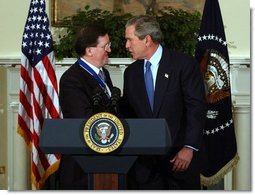 NATO is the most successful alliance in history, and Lord Robertson has led NATO during some of the most challenging years of its history. Not long ago, some questioned whether NATO could or should survive the end of the Cold War. Then the alliance proved its enduring worth by stopping ethnic cleansing in Bosnia and keeping the peace in Kosovo. Some wonder whether NATO could adopt to the new threats of the 21st century. Today, NATO forces are fighting terror in Afghanistan and supporting a multinational division in Iraq.

Today, in Iraq, a member of NATO -- Italy -- lost some proud sons in the service of freedom and peace. The United States sends our deepest condolences to the families who died -- of the soldiers and policemen who died. We appreciate their sacrifices. I appreciate the steadfast leadership of Prime Minister Berlusconi, who refuses to yield in the face of terror.

Lord Robertson is a patient leader, he's a determined leader, and over the past four years his skills and talents have made many achievements possible. Lord Robertson oversaw the largest expansion in NATO's history, a major milestone in the fulfillment of our shared vision of a Europe whole, free and at peace. He helped open a new chapter in NATO's relationship with Russia through the creation of the Russian-NATO Council. He ensured that NATO would honor its commitment to come to the defense of fellow NATO member, Turkey. And he pursued an ambitious agenda of transformation to make NATO forces lighter, faster and better able to respond to complex and ever-changing threats.

America owes a special debt to Lord Robertson. When our nation was attacked on September the 11th, 2001, Lord Robertson led NATO to invoke, for the first time in its history, Article V, which states that an attack against one NATO ally is an attack against all. Americans will never forget that vital support from our closest allies on one of the darkest days of our history.

Our alliance continues to face and to meet threats to peace and prosperity and freedom. Lord Robertson's leadership has been crucial to meeting these challenges. His tenure at the helm of this institution shows that power of collective defense when free nations act to serve great causes, and free nations act to produce results. Lord Robertson's efforts and vision leave behind a legacy of effective multilateralism that will benefit this alliance for years to come.

When NATO was founded over half a century ago, President Harry Truman said this: "By this treaty, we are not only seeking to establish freedom, freedom from aggression and from the use of force in the North Atlantic community, but we're also actively striving to promote and preserve peace throughout the world." We honor Lord Robertson here today for his dedication to the high ideals of the NATO Alliance, the promise of peace throughout the world.

I'm going to ask the military aide now to read the honor. It is my honor to welcome this good man, to present the Medal of Freedom to the Right Honorable Lord Robertson of Port Ellen.

(The Medal of Freedom citation is read, and the Medal is presented.) (Applause.)

LORD ROBERTSON: Mr. President, friends, I'm honored and grateful to receive this Medal of Freedom. I know how rare and important it is, so I fully appreciate and recognize the tribute that you pay to me today. This is a great award from a great country. Mr. President, I thank you most sincerely.

But as you recognize me in this ceremony, I want to recognize those who allowed me to qualify for it, a team of people at NATO, from my close staff in the private office, through the civilian international staff, and, indeed, the ambassadors to the North Atlantic Council, to the people in uniform, all of them who carry out the work of the world's most successful defense alliance ever. They are the heroes and the architects of today's award, and I pay them the deepest compliment for making it possible.

Mr. President, the United States of America helped to found the North Atlantic Treaty Organization over 50 years ago. And since then, America has made this organization of permanent allies strong, and shared the responsibilities for its enduring mission of defending the values of freedom, democracy, and the rule of law. This Alliance stood firm in the years of the Cold War when our liberty was threatened. Just as it stood firm for international order in the Balkan horrors of the 1980s and '90s, it stands firm today behind the forces of decency and democracy in faraway Afghanistan.

And that is why, on the day after America was attacked on the 11th of September, 2001, all 19 NATO countries stood firm, saying with one voice that the attack was not just on the United States, it was an attack on each and every other NATO country.

Mr. President, as you said, this is not the NATO of the past. Together, we've created a transformed alliance, with new partners, new missions and new capabilities, to stand firm against the new and deadly threats that we face in the 21st century. Good people expect no less, and they depend on our wise leadership to keep them as safe and secure as they deserve to be.

Mr. Bush -- President Bush, as you are honoring me, I would like to take a moment to express my gratitude to you. From the beginning, you have been a strong friend to me and to the Atlantic Alliance, and I pay you great credit for that.

Mr. President, I believe that I am the first son of Scotland to receive this, America's highest civilian award. (Laughter.) I am very proud. President Woodrow Wilson said this: "Every line of strength in American history is a line colored with Scottish blood." (Laughter.) And he knew what he was talking about. (Laughter.) So today this Scot salutes America's great contribution to the free world, and commends its continuing and lasting commitment to the Atlantic Alliance and all that it stands for. I thank you and the American people for this great honor you've done to me today.