For Immediate Release
Office of the First Lady
November 10, 2003

MRS. BUSH: Thank you very much, Mrs. Baldacci, for welcoming me to Maine. I'm so glad to be here. I'm so happy to be here in this magnificent Merrill Auditorium with the beautiful Kotzschmar organ behind us. I commend you for preserving this historic treasure. And a special thanks to Earle Shettleworth for your work as director of the Historic Preservation Commission. I also brought with me Mr. John Nau. He's the chairman of the Advisory Council on Historic Preservation, right here with me, and he will be talking to you in a minute about Preserve America. And also Fran Mainella, who is sitting here with Mrs. Baldacci. Fran is the head of the National Park Service for the United States. So thank you, Fran, for joining me. 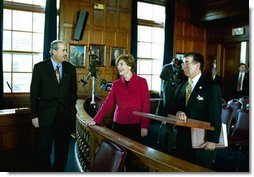 I was here almost this time last year in Portland for the dedication of the McLellan House and the L.D.M. Sweat Galleries as part of the Portland Museum of Art. The gallery is a rich blend of art and heritage, where visitors can literally walk through 300 years of history.

Thanks to the state representatives who are here today as well, and to the residents of Portland for making this city such a great place to call home, and a great place to visit. Maine is a beautiful state, one with its own distinct character. And the people who live here are unique characters, as well. I happen to be related to a few of them. (Laughter.)

The Bush and Walker family have made neighboring Kennebunkport their home for five generations. My girls are the fifth generation of Bushes and Walkers to get to spend their summer -- to be so lucky as to spend their summer in this beautiful state. Both President Bushes have enjoyed spending their summers here since they were children. George H. W. Bush grew up here and after he married Barbara Bush, every summer they would put my husband, George W. Bush, and all the other little brothers and sisters into their station wagon and they'd drive from Texas to Maine. And the children loved -- and really their most important memories are centered around those family times here in your beautiful state. They loved the fishing and the boating and the swimming and the tidal pools. In fact, that was a family tradition -- they called it "boony-wild" swimming, where you put your babies, naked, into those little tidal pools. (Laughter.)

Our daughters have loved coming here their whole lives as well, with their grandparents and their cousins. And we're all kids again, even President Bush, when we're here in Maine.

Two years ago, we were visiting George's parents to celebrate the 4th of July and George woke up at 6:00 a.m. as usual and went downstairs to get a cup of coffee. And he sat down on the sofa with his parents and put his feet up. And all of a sudden, Barbara Bush yelled, put your feet down. George's dad replied, for goodness sake, Barbara, he's the President of the United States. And Barbara said, I don't care; I don't want his feet on my table. (Laughter.) Even Presidents have to listen to their mothers. (Laughter.)

President Bush loves spending time here, and so do millions of children and families who visit every year. With its rich maritime history and its picturesque coastline, Portland is one of the most visited cities in Maine. For children of all ages, history comes alive here. At the boyhood home of Henry Wadsworth-Longfellow, budding writers can learn how his hometown inspired this remarkable poet. And with 103 steps to the top of the Portland Observatory, they can see all of beautiful Casco Bay.

Once threatened by deterioration, the observatory has been restored thanks to the city and the community, and not to mention the thousands of pennies collected by school children. Sixth graders with Cathedral School pooled their pennies, and I'm so pleased that they are here with their principal, Sister Theresa Rand. Thanks to all of the school children and the teachers who are here today.

Cathedral students, like so many in Portland, are committed to preserving their hometown. Recently, they helped clean the grounds of Eastern Cemetery, collecting eight bags of trash, and they learned about Portland's early residents as they studied headstones from the late 1600s.

Students and teachers from across Portland make the community their classroom. When students visit Victoria Mansion, they can see the finest example of Italian villa-style architecture. When they attend concerts at the First Parish Church, they learn about the Maine Constitution, and they can relive the lives of early settlers at Norland Farms, where they work in the barn and study in a one-room schoolhouse.

Kayla Binford's favorite place to visit is Longfellow's home. She said, you're walking right where he did such a long time ago. He wrote poems in his home and, if you look around, you can probably think of how he felt.

President Bush and I want every child and every American to learn about our nation's heritage and to enjoy our nation's treasures. A new White House initiative called Preserve America will help ensure that they get to do just that. Preserve America promotes cultural and natural preservation and encourages greater appreciation of our heritage -- from monuments and buildings to landscapes and main streets. The Departments of Interior and Commerce and the Advisory Council on Historic Preservation are strong partners in this initiative.

Preserve America directs federal agencies to inventory and promote greater use of historical sites, in partnerships with state, tribal and local governments. This initiative will provide more opportunities for preservation while increasing heritage tourism and economic development.

Portland is a great example of a community that's using its past to build a better future. Downtown has museums and galleries on almost every corner. Old Port is one of the most successfully revitalized districts in the country. In Parkside and the West End, streets once full of deteriorating houses now show signs of neighborhood pride. On Commercial Street, new architecture is merging with 19th century warehouses. And under Portland's preservation program, landmarks such as City Hall are receiving the resources and the support they deserve. Preserve America supports and promotes efforts like this. America's downtowns are vital parts of our communities. By ensuring their success, we strengthen America.

Another goal of Preserve America is to promote the conservation of and the enjoyment of our natural resources. Our open spaces are sanctuaries for learning and reflection. Thanks to conservation efforts, one beautiful place visitors can enjoy is Fort Williams Park on Cape Elizabeth. Established in 1894, the fort served as headquarters for the harbor defenses of Portland during World War II. In 1963, Fort Williams closed, but the residents of Cape Elizabeth wanted to preserve its history. They collected more than $200,000 and reopened the fort as a park. Today, nearly one million people enjoy the scenic coastal trails every year. Fort Williams is also home to the Portland Head Light, Maine's first lighthouse and the oldest U.S. lighthouse in continuous operation.

The final component of Preserve America is honoring communities like Portland for their hard work. The Presidential Award for Preserve America will reward projects that achieve public benefits through preservation. And communities that integrate preservation and tourism may apply to be Preserve America communities. John Nau will describe the application process in just a few moments. These awards will highlight model projects and encourage community leaders to share their experiences with others.

Preserve America will help save our past and ensure a future filled with opportunities for learning and enjoyment. This initiative and the awards and federal support will provide strong incentives for continued preservation of our cultural and natural resources. I commend you for preserving Portland's historic past for visitors, neighbors and, most important, for children.

In his poem, My Lost Youth, Longfellow wrote, "Often I think of the beautiful town that is seated by the sea; often in thought go up and down, the pleasant streets of that dear old town, and my youth comes back to me." With your continued work to preserve your heritage, all who visit this city by the sea and who live in its historic streets will think of Portland as home. Thank you very much. (Applause.)