For Immediate Release
Office of the Press Secretary
October 27, 2003

THE PRESIDENT: Good morning, everybody. I'll share a few words and then answer a couple of questions.

First, Ambassador Bremer and General Abizaid have been briefing the Secretary of Defense and my national security team, General Myers, about the situation in Iraq. We spent time talking about the success of the donors conference, the fact that the world community is coming together to help build a free Iraq, and we want to thank the world for the willingness to step up and to help. 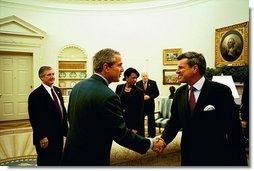 Ambassador Bremer was particularly pleased with not only the fact that governments stood up, but that there was a series of private sector companies willing to help in Iraq, and that's a positive move for the people.

We spent time, obviously, on the security situation. There are terrorists in Iraq who are willing to kill anybody in order to stop our progress. The more successful we are on the ground, the more these killers will react. And our job is to find them and bring them to justice, which is precisely what General Abizaid briefed us on. It is a -- the people have got to understand, the Iraqi people have got to understand that anytime you've got a group of killers willing to kill innocent Iraqis, that their future must not be determined by these kind of killers. That's what they've got to understand. I think they do understand that -- they do. The Ambassador and the General were briefing me on the -- the vast majority of Iraqis want to live in a peaceful, free world. And we will find these people and we will bring them to justice.

This government is determined to hear the call from the Iraqis, and the call is they want a society in which their children can go to school, in which they can get good health care, in which they're able to live a peaceful life. It's in the national interest of the United States that a peaceful Iraq emerge. And we will stay the course in order to achieve this objective.

Deb, you've got a question?

Q Yes, sir. Mr. President, the attacks are getting more brazen, they're getting more frequent. What do you know about who is behind these attacks? Is it Saddam? And what steps did you all discuss this morning about better protecting U.S. personnel there?

THE PRESIDENT: The best way to describe the people who are conducting these attacks are cold-blooded killers, terrorists. That's all they are. They're terrorists. And the best way to find them is to work with the Iraqi people to ferret them out and go get them. And that's exactly what we discussed.

What was the other part of your question?

Q What steps did you discuss this morning about better protecting U.S. personnel?

THE PRESIDENT: Well, I think if you -- we've hardened a lot of our targets for U.S. personnel there. And today's attacks were against places like the Red Cross, or police stations. These people will kill Iraqis. They don't care who they kill. They just want to kill. And we will find them, exactly what we discussed on how best to do so.

The Iraqi people understand that there's a handful of people who don't want to live in freedom, aren't interested in their children going to schools, aren't -- don't really care about the nature of the health care they get, aren't pleased with the fact that the electricity is coming back on line, aren't happy about the fact that Iraq is now selling oil on the world markets and people are finding work. And they'll do whatever it takes to stop this progress.

Q Mr. President, much of the aid offered for Iraq at the Madrid conference was in the form of loans, rather than grants. What impact might this have on your threat to veto the U.S.-Iraqi aid bill if part of the reconstruction aid is in loans?

THE PRESIDENT: My attitude is the United States ought to provide reconstruction money in the form of grant.

Q So no change in the veto threat, then?

THE PRESIDENT: My attitude has been, and still is, that the money we provide Iraq ought to be in the form of a grant. And the reason why is we want to make sure that the constraints on the Iraqi people are limited so that they can flourish and become a free and prosperous society.

Q Thank you, Mr. President. Welcome back from Asia, sir.

THE PRESIDENT: Thank you very much. I'm glad somebody welcomed me back. (Laughter.) I better call on you first next time. (Laughter.)

Q If I may just follow on Deb's question.

Q And actually, Mr. Bremer, as well. The situation in Iraq, can you characterize how it is you come since July 23rd, when you last met, I believe, with the President, and as adjust tactics to deal with things such as suicide bombers, what effect, if any, is that having on the hunt for weapons of mass destruction?

THE PRESIDENT: I'll let the Ambassador speak. Again, I will repeat myself, that the more progress we make on the ground, the more free the Iraqis become, the more electricity is available, the more jobs are available, the more kids that are going to school, the more desperate these killers become, because they can't stand the thought of a free society. They hate freedom. They love terror. They love to try to create fear and chaos. And what we're determined in this administration is not to be intimidated by these killers. As a matter of fact, we're even more determined to work with the Iraqi people to create the conditions of freedom and peace, because it's in our national interest we do so. It's in the interest of long-term peace in the world that we work for a free and secure and peaceful Iraq. A free and secure Iraq in the midst of the Middle East will have enormous historical impact.

You may want to speak to the issue, Ambassador.

AMBASSADOR BREMER: Well, a lot of wonderful things have happened in Iraq since July, as you mentioned. We have a cabinet now, with ministers actually conducting affairs of state. We have met all of our goals in restoring essential services. All the schools and hospitals are open. Electricity is back at pre-war levels. We're moving ahead with our plan. We'll have rough days, such as we've had the last couple of days. But the overall thrust is in the right direction, and the good days outnumber the bad days, and that's the thing you need to keep in perspective.

Q The fires in Southern California now not only taking homes, but there are a number of casualties. What can your administration do to come in and help? Are you getting reports on what's happening in California?

THE PRESIDENT: I am. Chief of Staff Andy Card spoke to the governor last night, spoke to the senators last night, Senator Boxer, spoke to Congressman Duncan Hunter, assured all three that the federal government will provide all resources necessary, at the request of the state, to work and fight these fires. FEMA Director Brown is on his way to California now. He will give us an assessment. We want to help put them out. This is a devastating fire, and it's a dangerous fire. And we're prepared to help in any way we can.

Q Thank you very much. Can you tell us if you will direct your staff to turn over the highly classified intelligence documents that the 9/11 commission has so far been unsuccessfully seeking, even if they are presidential daily briefings, and if so, when?

THE PRESIDENT: Yes, those are very sensitive documents. And my attorney, Al Gonzales, is working with Chairman Kean. Thank you.