For Immediate Release
Office of the Press Secretary
October 14, 2003

THE PRESIDENT: Thank you all for coming. Thank you. Please be seated. Welcome. To all you San Antonio Spurs fans, we're glad you're here in the Rose Garden. I'm particularly glad the San Antonio Spurs are here today. We want to congratulate you on a fantastic championship run.

I first want to welcome my friend, Peter Holt, who turned out to be a pretty darn good owner. (Laughter.) It's more than I can say for the former Ranger owners. (Laughter.) But congratulations, Peter, to you and your organization. I want to thank R.C. Buford, who is the General Manager; and Greg Popovich, who is the manager of -- the coach of the club. And I want to welcome the players, your wives and friends and family, here. After this is over, I'd like to invite you in the Oval Office and let you see where the decisions are made that affect the peace and freedom of this world. 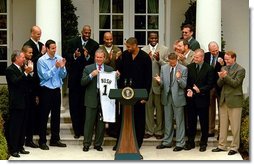 I want to welcome some huge San Antonio Spurs fans -- Senator John Cornyn from San Antonio; Lamar Smith and Henry Bonilla, as well, from San Antonio. You got to know that during the playoffs these guys were touting the Spurs. They were giving a pretty hefty line to anybody who dared bet against the Spurs. And you didn't let them down. So, welcome, I'm glad you're here.

I also -- one of the things that happens when a championship team comes here, it gives me a chance to talk about the development of a culture, a winning culture inside an organization. I like to call it a culture of service, people being willing to serve something greater than themself, in this case, a team.

I was struck by Tim Duncan's comments after the 6th game when they were talking about another fantastic individual effort he had. And a reporter said, what about that effort. He said, it's cool, but then immediately went on to talk about the accomplishments of his teammates, recognizing that you can't win a championship unless you're able to rely upon others, and lift others up, and participate with others, and work hard with others. And it's a phenomenal tribute to the San Antonio Spurs that they've got such great individual players who are willing to work as a team. And it's a wonderful example for our country, it really is.

The other thing that struck me about this organization that is so powerful is that there is a culture of service when it comes to utilizing their positions as champs, to make somebody else's life better. Gregg Popovich won a Point of Light for his drug -- anti-drug programs in the early '90s. What a class act that must be for players, to work for a coach who then takes time out of his private life to set a good example for the children of the community in which he lives, and to work to rally the armies of compassion to make somebody else's life better -- in this case, to help a community fight off the scourge of drugs.

Or David Robinson, who is now heavily involved in education in the San Antonio community. He's not only a great husband, but a great role model for others to see. I know many of you all do the same thing in your communities, that you care deeply about the lives of your fellow citizens, and I want to congratulate you. I think you're champs because you understand that serving something greater than yourself is the road to championships. And that's what you're here to do, is to receive the accolades from our country for serving as not only great athletes, but as great role models for children who look up to you.