For Immediate Release
Office of the Press Secretary
October 7, 2003

THE PRESIDENT: Thank you all for coming. I met with my Cabinet, we talked about national security matters and economic security matters. We're making good progress on the economy; looks like we're growing, and that's important. Last month we -- people are finding work, but we're not satisfied with the progress that is being made. We talked about ways to continue the economic vitality of our country. The tax cuts need to be made permanent so there's certainty in the tax code. We need an energy plan so that our businesses and employers, both large and small, know there's a reliable source of energy available. 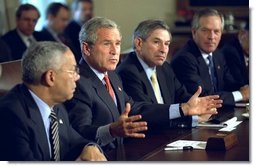 And in a lot of these matters the Congress needs to join with this administration to pass good law so that the American people can find work. We're an optimistic administration because good things are beginning to happen in our country. We will not rest until everybody who is looking for work can find a job.

I want to thank the members of the Cabinet for serving our nation with such class and distinction. And I'll be glad to answer some questions, starting with the AP man.

Q Thank you, Mr. President. Back in August, you said you thought Arnold Schwarzenegger would make a good governor. We've learned some new things about him. There's an election today. Do you still feel that way?

THE PRESIDENT: I feel like the California people are going to make a wise decision, that they -- they are now in charge of the process. And it looks like there's a pretty active turnout in absentee ballots and people are taking it seriously, and I have no idea how the election is going to turn out.

Q Is he the kind of guy you could work with?

THE PRESIDENT: If he's the governor, I'll work with him, absolutely. He's obviously waged a spirited campaign, he's captured a lot of people's imagination. I haven't been paying that close attention to it, because I've got a job to do here in Washington. But the process is about over, the people of California are going to speak and I look forward to seeing what the results are. I may not stay up for it -- (laughter) -- all night long. I'll be reading your stories first thing in the morning.

Q Mr. President, beyond the actual leak of classified information, there are reports that someone in the administration was trying to -- after it was already out -- actively spread the story, even calling Ambassador Wilson's wife "fair game." Are you asking your staff is anyone did that? And would it be wrong or even a fire-able offense if that happened?

THE PRESIDENT: Well, the investigators will ask our staff about what people did or did not do. This is a town of -- where a lot of people leak. And I've constantly expressed my displeasure with leaks, particularly leaks of classified information. And I want to know, I want to know the truth. I want to see to it that the truth prevail. And I hope we can get this investigation done in a thorough way, as quickly as possible.

Q Mr. President, a survey of economists that we published yesterday found that -- it was between 40 and 50 of them -- and they think that the growth rate over the next year may only be in the low 3 percent range, and that's below the 4 percent range that you and your economic advisors have said will be needed to create the kind of jobs that will really keep the growth going. Does that concern you? Do you think those predictions are accurate?

THE PRESIDENT: Well, one thing is certain, that the growth rate is going to be positive, as opposed to the negative growth rate we inherited. In other words, we came into office and dealt with a recession, then dealt with attacks, then dealt with corporate scandals, dealt with the march to war, all of which affected the confidence of the people. And we put forth a very aggressive tax plan, because we believe that that is the best way to help this country grow out of recession.

I've just outlined other things that need to happen in order to make sure that the people are able to find work. Dick, I am not very good about guessing about the economy. There's all kinds of experts, you'll probably find all kinds of opinions. But I do know that the actions we have taken were necessary actions and that are good -- they were good actions for economic vitality and growth.

We need an energy plan. We've debated an energy plan for too long. This administration has put forth a very good energy plan. And Congress needs to quit debating the idea, get the differences reconciled and get a bill to my desk. I'm confident Senator Domenici and Representative Tauzin want to do just that. So there are other things to do to get this economy moving, and we'll see what -- see what happens.

Q Mr. President, how confident are you the investigation will find the leaker in the CIA case? And what do you make of Sharon's comment that Israel will strike its enemies at any place, any time?

THE PRESIDENT: This is the dual question. (Laughter.) I'm trying to figure out if I want to answer either of them, since you violated a major rule. (Laughter.) At least it's not a cell phone. (Laughter.)

Randy, you tell me, how many sources have you had that's leaked information that you've exposed or have been exposed? Probably none. I mean this town is a -- is a town full of people who like to leak information. And I don't know if we're going to find out the senior administration official. Now, this is a large administration, and there's a lot of senior officials. I don't have any idea. I'd like to. I want to know the truth. That's why I've instructed this staff of mine to cooperate fully with the investigators -- full disclosure, everything we know the investigators will find out. I have no idea whether we'll find out who the leaker is -- partially because, in all due respect to your profession, you do a very good job of protecting the leakers. But we'll find out.

In terms of Prime Minister Sharon, I have constantly said Israel should defend herself. But I've also told -- as I mentioned to you at the press availability yesterday -- that it's important for the Prime Minister to avoid escalation, that the decisions he makes to defend her people are valid decisions. We would be doing the same thing. This country will defend our people.

But we are also mindful when we make decisions, as the Prime Minister should be, that the -- that he fully understand the consequences of any decision and that while he defends his people that there is not -- that he doesn't create the conditions necessary for -- that would cause the escalation -- the violence to escalate.

THE PRESIDENT: The Prime Minister must defend his country. It's essential. This is a country which recently was attacked by a suicider that killed innocent children and women, people that were celebrating in a restaurant. And he must do what is necessary to protect himself. At the same time, as I said yesterday and will continue to say to Ariel Sharon, avoid escalating violence.

Listen, thank you all. Anybody else did not get a question in this vaunted press corps?

THE PRESIDENT: Listen, I'm excited about the playoffs. I tuned in after the State Dinner that was somewhat covered in the press yesterday. (Laughter.) But it was -- you know, it's good for baseball. My team, of course, was eliminated in June. (Laughter.) Thank you.