For Immediate Release
Office of the Press Secretary
October 2, 2003

THE PRESIDENT: Thank you all very much. Sientese, Embajador. Thank you for coming. Bienvenidos. Mi casa es su casa. (Applause.) I want to thank you all for coming to celebrate Hispanic Heritage Month. 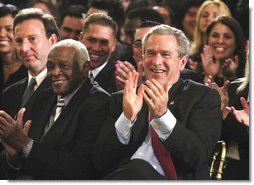 I appreciate my Ambassador to Mexico, Tony Garza. He's been a longtime friend. He was the Secretary of State in the state of Texas. It gave him a chance to learn diplomacy. (Laughter.) He's a great man and a great friend.

I have asked people from Hispanic heritage to join my administration: Hans Hertell, who is the Ambassador to the Dominican Republic, is with us -- (Applause.) Hans brought his family with him. (Laughter.)

I've got a Cabinet Secretary de Cuba who is Mel Martinez. I don't know if you know Mel's story -- speaks volumes about our nation and about Mel's upbringing. In the early '60s, Cuban parents were worried about their sons growing, their daughters growing up in tyranny. They were afraid about what it would be like for a child to grow up in a world in which terror reigned and there was no freedom. And so Mel's parents put him on an airplane destined for the United States of America.

Imagine the choice of a parent -- I would daresay there's really one country, though, that a parent would be feeling comfortable of sending their child to, and that's America, because of what we stand for. Mel is Pedro Pan. He is now in the Cabinet of the President of the United States -- which speaks volumes about you, Mel, and volumes about our country, as well. (Applause.) Hector Barreto is with us today, runs the SBA. Where are you, Hector? Donde esta? Thank you, Hector. (Applause.) 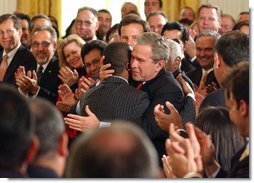 Everybody needs to have a good abogado. (Laughter.) I've got a really good one -- (laughter) -- Al Gonzales is my lawyer and close friend. (Applause.) Eduardo Aguirre is the Director of Citizenship and Immigration Services. Welcome, Eduardo. Gaddi Vazquez. Donde esta, Gaddi? Where is he? Peace Corps, running the Peace Corps. He's out recruiting new members. (Laughter and applause.) A donde? Oh, yes, there he is. (Applause.) Gaddi got here a little late. (Laughter.)

I'm so honored that members of the United States Congress are here with us today. The Senator from the great state of Texas -- I emphasize the great state of Texas -- John Cornyn. (Applause.) The Chairwoman of the Congressional Hispanic Conference, Ileana Ros-Lethinen, from Florida. (Applause.) Mario Diaz-Balart from Florida is with us. (Applause.) Devin Nunes, from California. Donde esta Devin? (Applause.) It's an old trick here in Washington, get your name on the roster, but don't show up. (Laughter.) At least you get mentioned. (Laughter.)

I am also honored that Lisa Guerrero is with us. Lisa, thank you very much for serving as the emcee. I appreciate you being on TV on Monday nights, too. (Laughter and applause.) 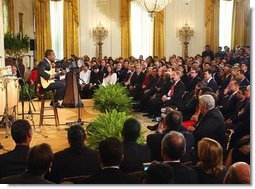 I'm so honored that Father Cutie is here. Thank you very much for leading us in the blessing. Bacilos -- thank you, guys, for being the young stars. The Ambassador turned to me and said, these are the young dudes, the young stars of the music scene. (Laughter.) I can see why. Congratulations. Thank you -- (Applause.)

I am -- let me see. I'm probably going to leave somebody out here as we get moving through here. Victor, thank you. Awesome job. I appreciate you coming. (Applause.)

I'm glad you brought your manager with you. He's not exactly a Latino ball player, but he's a fine guy, and that's Buck Showalter. Thank you for coming, Buck, and thank you for bringing your family. (Applause.) It's good to see you all.

Magglio Ordonez of the Chicago White Sox is with us. Where are you, Magglio? Thank you, buddy. Congratulations. (Applause.) Great season, yes. We're watching you, we've got the dish upstairs. (Laughter.) Bartolo Colon -- donde esta Bartolo. (Applause.) I can see why you can throw it hard. (Laughter.)

Carlos Beltran, of the Kansas City Royals -- Carlos, good job. (Applause.) Donde esta Jose Lima? There he is -- Jose. Yes. (Applause.) You're back. (Laughter.) Congratulations on having a great year. Tino Martinez, Saint Louis Cardinals. (Applause.) Nelson Figueroa, of the Pirates. Where's Nelson? Thank you, Nelson. (Applause.) Are you sure you're old enough to qualify? (Laughter.) Vladimir Guerrero. Yes, Vladimir. (Applause.) Glad you're here, Vladimir. Thanks for coming.

I also know your general manager really well -- he's a really good guy, isn't he? Omar Minaya, mi amigo. Thank you for coming, Omar. (Applause.) And congratulations. I knew you'd make it all along. You're probably wondering why I didn't make you general manager of the Rangers, but nevertheless -- (laughter.) Omar is the general manager of the Montreal Expos. He really does a great job. And I've known Omar a long time. He's a great baseball guy. More important, he's a great person. I'm really proud to have you here.

Just to show you that we're multi-sport people here, it is my honor to welcome Carlos Arroyo. Carlos, I want to thank you very much for coming. He's the basketball player for the Utah Jazz. (Applause.)

Katie, thank you very much for leading us in the Anthem. You've got a beautiful voice, you've got a lot of poise and a lot of talent, and we're honored that you're here with us today. Thanks for coming. We're really glad you're here. And thanks for bringing your little brother. I hope he's nice to you all the time. (Laughter.)

The contributions of the Hispanic community have made this country stronger and better. Today we honor the contributions of the entertainment we had here in the East Room. I don't know if you know this, but this is a common occurrence for the Bush administration, to honor men and women of Hispanic descent, to honor their presence and listen to their talents. But this has happened throughout the years in the White House. There's been some interesting moments here. Pablo Casals was a Spanish-born cellist. He lived in Puerto Rico. He performed for two Presidents -- catch this -- the first was Theodore Roosevelt in 1904; and the second was John Kennedy in 1961 -- 57 years in between his first and second visit. Nevertheless, he graced this room and this house.

We've also had Jose Limon, he's a modern dancer; Edward Villella; to my family's friend, Gloria Estefan. You should have brought her. (Laughter and applause.)

One Hispanic entertainer we remember in a special way today is the Queen of Salsa, Celia Cruz. (Applause.) She was an unforgettable performer who fled Cuba in 1960. She became a U.S. citizen and spent the rest of her life sharing the rhythms of her homeland with people all around the world. Celia Cruz passed away three months ago. We miss her and we honor today to welcome her husband, Pedro -- (Applause.)

Let me tell you a story about Lou Sobh, who is with us today. In 1960, he left Mexico, no money, and he couldn't speak the language. He came to America. He didn't -- he couldn't speak the language at all, so he worked, and he taught himself English. He ended up becoming a janitor in a department store, a hard worker. He had a dream, and he was working toward his dream. He served in the United States Army. He got out of the Army, and he had a dream to open up his own car dealership. Today, he owns 14 -- not one car dealership, but 14 car dealerships. He employs 800 people. He's got three car franchises in Mexico.

He's living proof of the American Dream. It's an incredibly important part of our nation, the Latino spirit of hard work and drive and enterprise. And, Lou, I want to congratulate you for being a success and setting an example. Thank you for coming, sir. (Applause.)

Today, as we celebrate Hispanic Heritage Month, we also must take pride in the generations of Hispanic Americans who have served in America's Armed Forces -- served to protect and defend a nation they love. Forty-two Hispanic Americans -- 42 -- cuarenta dos -- have earned the highest military decoration, the Medal of Honor. That's a lot. Today, men and women of Hispanic heritage continue to serve and sacrifice in the defense of freedom. They have our respect and they have our gratitude.

Earlier this year, at the National Naval Medical Center, I had an amazing experience -- Eduardo was there. I had the chance and privilege of meeting a patriot, Master Gunnery Sergeant Guadalupe Denogean. Sergeant Denogean is an immigrant from Mexico. He has served in the Marine Corps for 25 years. Last spring, he was wounded in combat in Basara, Iraq, and he was sent back for treatment. They asked Sergeant Denogean, did he have any requests? He said he had two: He wanted a promotion for the corporal who helped rescue him; and the second request is he wanted to be an American citizen.

I was there the day Sergeant Denogean took his oath of citizenship. Eduardo administered the oath. In a hospital where he was recovering, this son of Mexico raised his right hand and pledged to support and defend the Constitution of the United States of America. What made that moment amazing to me is that he had kept that oath for decades before he took it. I'm proud of the Sergeant. I'm proud to call him, citizen. I'm proud to call him, fellow citizen to America.

Through the lives of people like Sergeant Denogean and Lou and Celia Cruz, it is clear that the American Dream belongs to todos. It's for everybody, not just a few. And that's the greatness of our country. It's the spirit of America. And it's important that this generation and future generations keep that dream alive.

We're proud of our country. We're a strong country. We're militarily strong, and I'll keep us that way. But our wealth isn't really found in our military, or our pocketbooks. The true strength of America is found in the character of the American people, in the courage of the people, the creativity of our people, and in the compassion of our people.

As governor, and now as President, I've seen the character of America and the character of millions of Hispanic Americans who make our nation a better place. The warmth and the vitality of the Hispanic culture, the energy and faith of Hispanic men and women are great gifts to America.

I want to thank you all for coming to celebrate those gifts. Que Dios los bendiga a todos, y que Dios bendiga a los Estados Unidos. Thank you for coming. (Applause.)