For Immediate Release
Office of the Press Secretary
October 1, 2003

THE PRESIDENT: Thank you for the warm welcome. Please be seated -- unless you don't have a seat. (Laughter.) I'm proud to be with the men and women of the newest agency of our government. And today I'm honored to sign the first appropriations bill for this department. 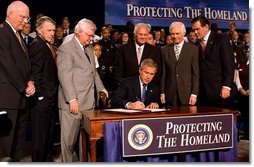 Many of you have served your country for years, in agencies with proud histories and honored traditions. Some of you are new to the federal service. All of us share a great responsibility. Our job is to secure the American homeland, to protect the American people. And we're meeting that duty together.

On September the 11th, 2001, enemies of freedom made our country a battleground. Their method is the mass murder of the innocent, and their goal is to make all Americans live in fear. Yet our nation refuses to live in fear. And the best way to overcome fear and to frustrate the plans of our enemies is to be prepared and resolute at home, and to take the offensive abroad.

The danger to America gives all of you an essential role in the war on terror. You've done fine work under difficult and urgent circumstances, and on behalf of a grateful nation, I thank you all for what you do for the security and safety of our fellow citizens.

I appreciate Tom Ridge agreeing to lead this important department. I'm honored to call him friend, and I'm proud of the job he is doing. I appreciate General John Gordon, who is the Homeland Security Advisor in the White House. I want to thank the very capable Department of Homeland Security leadership who are with us today. 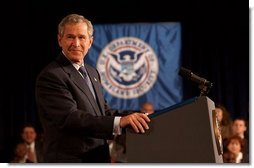 I'm also so pleased that members in the Senate and the House of both political parties are with us today. The stage wasn't big enough to hold you. Thank you for coming. Thanks for your hard work, and thanks for working together to do what's right for America.

This time two years ago, America was still in the midst of a national emergency. Smoke was rising from Ground Zero; recovery teams were carefully sifting through debris; and chaplains were comforting families and blessing the dead. Our nation does not live in the past; yet we do not forget the past and the grief of that time. We do not forget the men and women and children who were lost that day. We do not forget the enemies who rejoiced as America suffered, or those who seek to inflict more pain and grief on our country.

On September the 11th, America accepted a great mission, and that mission continues to this hour. We will do everything in our power to prevent another attack on the American people. And wherever America's enemies plot and plan, we'll find them, and we will bring them to justice. (Applause.)

The war on terror has set urgent priorities for America abroad. We are not waiting while dangers gather. Along with fine allies, we are waging a global campaign against terrorist networks -- disrupting their operations, cutting off their funding, and we are hunting down their leaders one-by-one. We are enforcing a clear doctrine: If you harbor a terrorist, if you feed a terrorist, if you support a terrorist, you're just as guilty as the terrorists, and you can expect to share their fate.

We're determined to prevent terror networks from gaining weapons of mass destruction. We're committed to spreading democracy and tolerance. As we hunt down the terrorists, we're committed to spending -- spreading freedom in all parts of the world, including the Middle East. By removing the tyrants in Iraq and Afghanistan who supported terror and by ending the hopelessness that feeds terror, we're helping the people of that regime, and we're strengthening the security of America.

The war on terror has also set urgent priorities here at home. Oceans no longer protect us from danger. And we're taking unprecedented measures to prevent terrorist attacks, reduce our vulnerabilities and to prepare for any emergency. That's what you're doing.

Each of you plays a vital role in this strategy to better secure America. Agencies that once worked separately to safeguard our country are now working together in a single department, and that's good for America. You've the authority to quickly put the right people in place as we respond to danger. You've got good leadership. Every member of this department has an important calling, and you need to know, when you come to work every day, your fellow citizens are counting on you.

Those in Customs and Immigration are performing essential work in controlling our borders, and at the same time, in reducing the backlog of immigrant applicants as we move toward a standard of six-month processing time for all applications.

At the Transportation Security Administration and the Coast Guard, you protect the vast road, rail and sea and air networks that are critical to the American economy. DHS scientists and engineers work to detect deadly chemical, biological and nuclear weapons. DHS experts help the public and private sectors to identify and address vulnerabilities in our power grids, chemical plants, communications systems and transportation networks. At FEMA, you joined forces with state and local authorities to respond quickly and effectively to any emergency.

All of you have been given a hard job, and you're rising to the challenge. The American people understand the importance of your work, and so does the United States Congress. The Homeland Security bill I will sign today commits $31 billion to securing our nation, over $14 billion more than pre-September 11th levels. The bill increases funding for the key responsibilities at the Department of Homeland Security and supports important new initiatives across the Department.

We're providing $5.6 billion over the next decade to fund Project BioShield. Under this program, DHS will work with the Department of Health and Human Services to accelerate the development and procurement of advanced vaccines and treatments to protect Americans against biological, or chemical, or radiological threats.

We're providing $4 billion in grants for our nation's first responders. We're focusing $725 million on major urban areas where it is most needed. We're also providing $40 million for Citizen Corps Councils through which volunteers work with first responders to prepare their communities for emergencies. We're ensuring that America's firefighters and police officers and emergency medical personnel have the best possible training and equipment and help they need to do their job.

We're better securing our borders and transportation systems while facilitating the flow of legitimate commerce. Our Container Security Initiative will allow for the screening of high-risk cargo at the world's largest ports and intercept dangerous materials before they reach our shores; supporting the efforts to strengthen our air cargo security system for passenger aircraft; to expand research on cargo screening technologies.

We're making sure the Coast Guard has the resources to deploy additional maritime safety and security teams, and patrol boats, and sea marshals to protect our ports and waterways.

More than $900 million in this bill will go to science and technology projects, including a major effort to anticipate and counter the use of biological weapons. With more than $800 million, we will assess the vulnerabilities in our critical infrastructures, we'll take action to protect them.

We're doing a lot here. And we're expecting a lot of you. When the terrorist enemies came into our country and took thousands of innocent lives, we made a decision in this country: We will not wait for enemies to strike again. We'll take action to stop them. We're not going to stand by while terrorists and their state sponsors plot, plan and grow in strength. By the actions that we continue to take abroad, we are going to remove grave threats to America and the world. History has given us that charge, and that is a charge we will keep. (Applause.)

We have been charged to protect our homeland, as well. And that's why we're taking actions to strengthen our defenses and to make our nation more secure. This bill is a major step forward in our ongoing effort, and I'm pleased to sign into law the Department of Homeland Security Appropriations Act of 2004.