For Immediate Release
Office of the Press Secretary
September 30, 2003

THE PRESIDENT: Mr. Mayor, thank you. I want to thank the business leaders here from the Chicago area for sharing with me their concerns about our economy. I think it's safe to say most people share the sense of optimism I do, but recognize there's still work to be done, particularly when it comes to job creation. 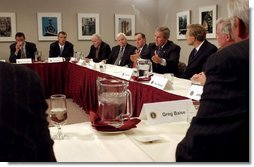 The thing I'm concerned about is people being able to find a job. We put the conditions in place for good job creation, but I recognize there's still people who want to work that can't find a job. And we're dedicated to hearing the voices of those folks and working hard to expand our economy.

And so I want to thank you all for taking time. Mr. Mayor, I wish the Cubs all the best. (Laughter.) I made a significant contribution to the Cubs, as you might recall --

THE PRESIDENT: -- when I was a -- yes, Sammy Sosa. I'll take great delight when they win.

PARTICIPANT: Thank you for Sammy.

THE PRESIDENT: Thanks for coming.

Let me answer a couple of questions, then we've got to go to Cincinnati. Deb.

Q Do you think that the Justice Department can conduct an impartial investigation, considering the political ramifications of the CIA leak, and why wouldn't a special counsel be better?

THE PRESIDENT: Yes. Let me just say something about leaks in Washington. There are too many leaks of classified information in Washington. There's leaks at the executive branch; there's leaks in the legislative branch. There's just too many leaks. And if there is a leak out of my administration, I want to know who it is. And if the person has violated law, the person will be taken care of.

And so I welcome the investigation. I -- I'm absolutely confident that the Justice Department will do a very good job. There's a special division of career Justice Department officials who are tasked with doing this kind of work; they have done this kind of work before in Washington this year. I have told our administration, people in my administration to be fully cooperative.

Yes, let's see, Kemper -- he's from Chicago. Where are you? Are you a Cubs or White Sox fan? (Laughter.) Wait a minute. That doesn't seem fair, does it? (Laughter.)

And again I repeat, you know, Washington is a town where there's all kinds of allegations. You've heard much of the allegations. And if people have got solid information, please come forward with it. And that would be people inside the information who are the so-called anonymous sources, or people outside the information -- outside the administration. And we can clarify this thing very quickly if people who have got solid evidence would come forward and speak out. And I would hope they would.