For Immediate Release
Office of the Press Secretary
September 29, 2003

THE PRESIDENT: Thank you all for being here. Please be seated. It's my honor to welcome to the Rose Garden the Stanley Cup champs. Congratulations. It's a -- I had the honor of meeting your captain. I saw a quote -- he said, "it's an awesome experience," talked about winning, what it's like to win as a team. And I want to congratulate the team that is with us today.

I want to thank Peter Simon, who is the chairman. I appreciate Lou Lamoriello, who is the general manager and the president and CEO of the New Jersey Devils. I want to congratulate Pat Burns, the Jack Adams Award winner -- which I guess means he's a really good coach. Gary Bettman, the commissioner, is with us. Mr. Commissioner, good to see you. 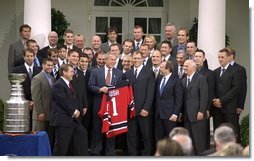 They tell me this cup is 110 years old. That makes it older than the Oval Office. (Laughter.) I see it's got all the names of the players who have won it, and now your names are on it. It's a fantastic legacy to athleticism and desire and drive. A couple of cuts here and there. (Laughter.) Maybe a missed tooth or two. (Laughter.)

One of the things that's interesting about the Stanley Cup is that each player gets to spend time with it. It must be pretty neat. The Cup has traveled throughout North America and Europe. It's been to some famous sites recently. It was at the McDonald's drive-through in New Glasgow, Nova Scotia. (Laughter.) It must have been a pretty interesting moment for that burger flipper. (Laughter.) Fill her up. (Laughter.) It showed up at the Bob Evans restaurant in Brunswick, Ohio. It went to Filthy McNasty's Bar and Grill in Toronto. (Laughter.) I don't know who took it there, but -- (laughter) -- I bet you're pretty happy the Cup can't talk -- (laughter) -- if you know what I mean.

Most important, though, these players took it to hospitals and schools, to senior centers and to a home for neglected and abused children. They took it to fire and police crews that are working long hours to keep their communities safe. They took it to the people in our Armed Forces. In other words, this Cup helped inspire people, helped lift up lives.

When I met Scott Stevens, he wasn't out there as a great hockey player, he was out there at the airport in Newark because he works for the Boys and Girls Clubs of Newark, participates in after-school programs to help kids make healthy choices in their life. He was involved with the Hockey Fights Cancer campaign.

So it's my honor to welcome you to the Rose Garden, as the great champs of the National Hockey League. Congratulations. Welcome.

(A jersey is presented to the President.) (Applause.)