For Immediate Release
Office of the Press Secretary
September 25, 2003

THE PRESIDENT: Listen, thank you all for coming. Today we met with the conferees on Medicare, and had a good and frank discussion about the need to work together to get a Medicare bill that modernizes the system, that fulfills the promises to America's seniors, that uses the latest technology to improve the health care of our elderly. 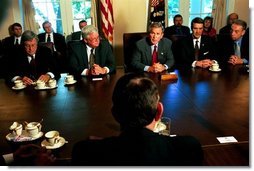 And in my judgment, the sentiment was optimistic. I believe people know it's possible to get it done. And there's a lot of work to get done, but, fortunately, we're surrounded here by conferees that are plenty capable, plenty smart and care deeply about the future of the country.

And so I want to thank them for coming, I want to thank you for your commitment to our seniors and I look forward to working with you to get a good bill out of both bodies and to my desk before you go home this fall.

I'd like to take a couple of questions. Terry.

Q Mr. President, with huge federal budget deficits, do you have any qualms about spending $400 billion on Medicare prescription drugs?

THE PRESIDENT: First of all, no, I don't. I think it's the right thing to do. We have an obligation to our seniors. Secondly, we've proposed a plan that reduces the deficit in half by five years -- within five years. I absolutely believe we're doing the right thing.

Q Sir, what did you think of the discovery of traces of weapons grade uranium --

THE PRESIDENT: Do what now?

THE PRESIDENT: It was on my agenda -- it will be on my agenda with President Putin this weekend. It was on my agenda with many of the world leaders I met with in New York. It is very important for the world to come together to make it very clear to Iran that there will be universal condemnation if they continue with a nuclear weapons program. And I will tell you, the response was very positive. People understand the danger of the Iranians have a nuclear weapons program. But, you bet, I'll talk to President Putin about it this weekend.

Q Sir, in February of 2001, your Secretary of State said that the sanctions against Iraq had prevented Saddam from developing any significant capability with respect to weapons of mass destruction. A year-and-a-half later, before the U.N., you called Saddam a grave and gathering danger. And I'm wondering, what changed in that time? Was it the nature of the threat? Did you get new intelligence? Or did 9/11 put a new -- set a new playing field for those --

THE PRESIDENT: Yes, the Secretary of State said the same thing, as well, that Saddam was a threat. Nine-eleven changed my calculation. It made it really clear we have to deal with threats before they come on our shore. You know, for a long period of time we thought oceans could protect us from danger, and we learned a tough lesson on September the 11th. It's really important for this nation to continue to chase down and deal with threats before they materialize, and we learned that on September the 11th.

Q What is your reaction to that; what do you think of it? And what are the consequences for the U.S. economy?

THE PRESIDENT: My reaction is, is that I would hope our friends in OPEC don't do things that would hurt our economy.