For Immediate Release
Office of the Press Secretary
September 24, 2003

PRESIDENT BUSH: Listen, thank you all for coming. Gerhard and I just had a very good meeting. The first thing I told him, I said, look, we've had differences and they're over, and we're going to work together. And I believe when Germany and America works together we can accomplish a lot of positive things. We're both committed to freedom; we're both committed to peace; we're both committed to the prosperity of our people. And I reaffirmed to Gerhard that America and German relations are very important to this administration. I have said so repeatedly. I said so in the Bundestag, and I reiterated it today with the Chancellor. 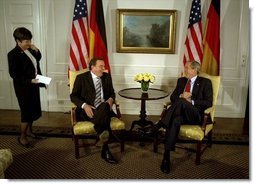 CHANCELLOR SCHROEDER: I can only comment and very much confirm what the President has just said. We addressed a whole range of international topics, but we didn't just exclusively talk about international affairs. We also addressed the economic situation, because we feel that our problems, when it comes to that, are similar, indeed. Both of our economies are by now so closely intertwined that it really makes sense to think about them conjointly.

I cannot conceal that I was very pleased, indeed, that the President did appreciate the contribution Germany is making within Afghanistan. We very much are trying to make this a sustainable contribution, and I think our people on the ground are doing a good job, and therefore, I have to say I'm proud of the work they're doing for us, and for us together.

We then proceeded to actually talk about the situation in Iraq, and indeed, we very much feel that the differences that have been, have been left behind and put aside by now. We are both agreed that we want to look into the future together. And I would like to reiterate the fact that Germany has a very strong, in fact a vested interest, in a stable and very democratic Iraq, and to development to that effect. It is very important not just for Iraq as such, but for the whole of the region, for Germany, and therefore, also for Europe.

We certainly have emphasized the fact, and I have once more said this to the President myself, how very much we would like to come in and help with the resources that we do have. We could very much envisage that we will assist in providing training for security staff, be it police functions or be it some form of military function. We do have the capacities for that available in Germany, and we would very much like to put them to that purpose.

Q Mr. President, what about the response to your speech yesterday?

PRESIDENT BUSH: I can only judge by your reaction to it. (Laughter.)