For Immediate Release
Office of the Press Secretary
September 22, 2003

THE PRESIDENT: We're going to have a couple of statements here. First, it's my honor to welcome two ministers from Iraq -- free Iraq -- the Minister of Public Works, the Minister of Electricity, people charged with improving the lives of the Iraqi citizens, people who the Governing Council has picked to lead these ministries. 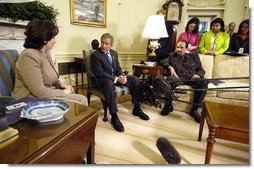 And their job now is to improve life. I love their spirit. I love the fact that they are dedicated to doing their jobs. And I also appreciate the appraisal of what's going on in Iraq, the assessment that we're making good progress toward achieving our objective.

So thank you all for coming here to America. We're proud of you and proud of you being pioneers for a free people. And welcome.

MINISTER BERWARI: Well, on September 3rd the Governing Council formed an Iraqi government. And this has been the most significant move after two steps before that; forming the government and Iraqis taking care of their own affairs has been received very well by the Iraqi people.

A sense of progress is being sensed in the streets of Iraq. More work is being done. And the work on restoring services to pre-war level has been achieved. Now we're working on planning for the next year program. We have great plans to improve services. Our mission is to show a different governance. We want to tell the Iraqis that the change that has happened four months ago is for their own benefit, through improving the public service.

Our visit this week is to seek support, continuous support from the U.S. government who liberated us, and we're very thankful for that, and to pledge and show our commitment to the future partnership and cooperation.

MINISTER SAMERAEI: Thank you, Mr. President, for the opportunity. We are, since of course the war, until now, we are working very hard to rebuild the electricity, which is destroyed by almost 30 years of system, that you know how was a system of doing things almost no technical background for it.

We lost a lot of power, we lost a lot of power plants over the year. We don't have really, in the time when the war is over, more than 3,300 megawatt out of actually before the war, almost 4,400. We are right now reaching that number back again. We have a plan to by next June to build another 2,000 to 3,000 megawatt. This is all -- will make Iraq again, having a lot of opportunities for war, because the employment will be high. When you have electricity you have oil to produce. When you have electricity, you have a treatment for the water.

All that I like to talk about this more and more, but I like to tell you about what's happening in Iraq the last five months. The last five months, Iraqis they have the freedom to talk. We have almost right now 86 newspaper, while before the war we have only three or four newspapers, all controlled by the government. All the 86 newspapers all not controlled by anyone right now except the individuals who own them.

We have actually the people right now talking freely in the market. They go and get, for example, dishes. We know that every single Iraqis right now, we can go and buy anything he wants. This is the freedom which we missed before, and we got it over the last five months. If the Iraqi people and the American help us for the next year-and-a-half, I almost guarantee -- I guarantee it to the President but I almost guarantee it to the American people that we will have different Iraq, Iraq who is going to help United States and the free world and also all the area around us, because we are going to build a democracy and Iraq will become example for all the Middle East areas and all the countries around us.