For Immediate Release
Office of the Press Secretary
September 17, 2003

THE PRESIDENT: Speaker Hastert, Mr. Chief Justice, Justice Kennedy, Justice Thomas, Senator Frist and Senator Daschle, Representative Pelosi, members of Congress, Governor Carlin, ladies and gentlemen: Laura and I are pleased to join with all of you for this morning's important ceremony. And all of us here today are honored to witness the unveiling of our Declaration of Independence, our original Constitution, and the Bill of Rights. 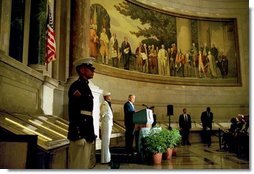 Because of the careful, patient work carried out these last two years, all Americans, and visitors from across the world can once again step forward and see our nation's founding documents.

This new display is certainly preferable to the burlap sacks once used to carry the Declaration. Since the Declaration of Independence first left Philadelphia in a horse cart, the founding documents have been moved many times, including a secret trip to Fort Knox during World War II. For the last half-century, their home has been this rotunda.

When President Harry Truman stood here 51 years ago, he rightly praised modern methods of document preservation. These methods served us well. In our day, preservation has become an even higher art, through the skill of conservators like those who accepted this very demanding assignment. The work of handling the fragile parchment and preparing it for these new encasements had to be difficult -- and must have been pretty nerve-wracking. I don't know how you practice for a job like that. (Laughter.) But I do know there's little margin for error.

Many Americans have seen reproductions of the Declaration of Independence. A lot of us have seen reproductions of the Constitution. We know so well the first three words of our Constitution, "We the people." Yet, as familiar as these documents are, to see them in their originals is a moving experience. I hope a lot of our fellow citizens come to this rotunda and see firsthand the work of our founding fathers.

Looking at the faded names of Hancock and Adams and Jefferson, Franklin, and others, you can better see the bravery behind the stirring words declaring independence. It was one thing to nod in agreement as the text was read and approved. It's quite another to take the quill and add your name, becoming at that instant the enemy of an empire. And each of the signers, as his pen moved across the page, had not only reached a great turning point in his own life, but in the life of the world. The true revolution was not to defy one earthly power, but to declare principles that stand above every earthly power -- the equality of each person before God, and the responsibility of government to secure the rights of all.

The courage of America's first leaders gave us the Declaration. Their patience and wisdom gave us the Constitution. They were patient through long and contentious and learned debates and discussions. They were wise in their understanding of human nature, with all its virtues and all the temptations. The supreme law of this land is the work of practical minds addressed to practical questions, like how to govern effectively and also limit the powers of government; how to represent the will of the people and to control the passions of temporary majorities.

Framers devised answers that can now be found in constitutions across the world -- separate branches, enumerated powers, checks and balances, specific protections of the Bill of Rights. Taken together, our founding documents set a standard that is the test and the burden of every generation. The text written by a slave-holder would become an unanswerable brief against slavery. The Constitution drafted and approved by men alone would, by its own logic, eventually assure the full participation of women. The ideals of our founders were stronger than any flaws of the founders. They rebuke our failures and guide our reforms.

"These charters of freedom," said Martin Luther King, "are a promissory note. a pledge of justice to all who are denied it." In the course of two centuries, the ideals of our founding documents have defined America's purposes in the world. Since July 4th, 1776, to this very day, Americans have seen freedom's power to overcome tyranny, to inspire hope even in times of great trial, to turn the creative gifts of men and women to the pursuits of peace.

We have seen freedom's power in Europe and Asia and Africa and Latin America, and we will see freedom's power in the Middle East. Every person in every culture has the inalienable right to life, liberty, and the pursuit of happiness. America owns the Declaration of Independence and the Constitution, but the ideals they proclaim belong to all mankind.

This morning, exactly 216 years after the Constitutional Convention finished its business, the American people can take pride in the care we have given to preserving the work of the founding generation. Their words first guided a nation of scarcely 4 million souls. Yet even in their own day, the founders knew they had put large events in motion, and free people everywhere remain in their debt.

In this rotunda are the most cherished material possessions of a great and good nation. By this rededication, we show our deep respect for the first principles of our republic, and our lasting gratitude to those first citizens of the United States of America.

May God continue to bless our country. Thank you. (Applause.)