For Immediate Release
Office of the Press Secretary
September 11, 2003

THE PRESIDENT: This morning we had a chance to go to a church service to remember the victims and pray for their families, the victims of 9/11/2001. Today -- this afternoon, Laura and I are here to thank the brave souls who got wounded in the war on terror, people who were willing to sacrifice in order to make sure that attacks such as September the 11th don't happen again. 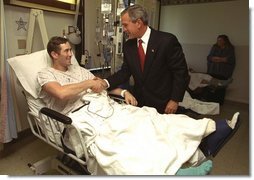 I want to thank the staff of Walter Reed, the docs and the nurses and the care-givers, the people who look after the families, for enabling me to say to our fellow citizens that when somebody gets hurt, somebody who wears our uniform gets injured, they get the absolute best care as quickly as possible. I was able to pin the Purple Heart on a number of people upstairs. I was able to hug their parents and thank them. I'm just so grateful that our country has got people who are willing to serve in a cause greater than themselves.

I'll answer a couple of questions, and then I've got to go.

Q Sir, does this new bin Laden tape concern you at all?

THE PRESIDENT: First of all, they're analyzing it. Secondly, his tape reminds us that the war on terror goes on. As well, his rhetoric is trying to intimidate and, you know, create fear. And he's not going to intimidate America. We are at war because of what he and his fellow killers decided to do two years ago today. And we will stay at war until we have achieved our objective: the dismantlement of terrorist organizations.

And it just reminds us of the duty we have got to do. And I say "we," my administration and all who serve our country, our duty is to protect our fellow citizens from people like bin Laden.

Q Mr. President, people are reminded of what happened two years ago -- think about what's happened in the past two years -- what can you say to them to make them feel like this won't happen again, that there won't be another --

THE PRESIDENT: Yes. Well, I can just tell them -- people that, first of all, we have -- we're slowly but surely dismantling al Qaeda. We are not only destroying terrorist training camps, cutting off their money, we're either killing or capturing a lot of their leadership.

And as I told the American people right after September the 11th, 2001, this would be a different kind of war and this would be a long war. And we're fighting this war on a lot of fronts, the major front of which is now in Iraq. And we're making steady progress toward achieving our objective, and we will continue to make progress. You can't negotiate with these people, you can't try to talk sense to these people. The only way to deal with them is to find them and bring them to justice, and that's what the United States -- and a lot of other countries working with the United States -- will continue to do.

Q Sir, are we any closer to getting a U.N. resolution?

THE PRESIDENT: Colin is going to be overseas starting tomorrow and over the weekend, and we'll see when he comes back. But the key thing for the United Nations resolution is that it will hopefully encourage other nations to participate. And I think other nations have an obligation to participate. A free Iraq will be in their nation's benefit. It will make the world more peaceful and more secure. And a free Iraq in the heart of the Middle East will make it more easy for us to not only secure America and other free nations, but will make it easier for there to be peace in the long run.

And, therefore, I would hope that nations would participate, and to the extent that some nations need an additional United Nations resolution, this could be helpful in encouraging international participation. But Colin is sitting down with other foreign ministers from the Perm 5, as well as Kofi Annan, starting tomorrow.

Okay, well, thank you all.