For Immediate Release
Office of the Press Secretary
August 22, 2003

THE PRESIDENT: It's a pleasure to be here in beautiful Seattle. I just met with members of the congressional delegation; also members of the business community, both large and small businesses, to talk about the fact that this economy here in Washington State is not as strong as it should be. 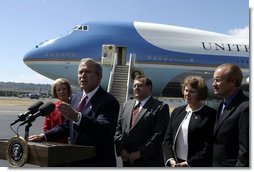 I'm fully aware that the unemployment numbers here are some of the highest in the country, and that's of concern. This is a resource-based state with a significant high-tech component, and both those sectors have been hit very hard by the economic downturn. And so we talked about ways to stimulate growth.

I talked about trade policy which will help the high-tech industry here in the state of Washington. We talked about the Healthy Forest Initiative, which is a common-sense plan to make sure that we save our forests before they get destroyed by catastrophic fire.

Yesterday I choppered over the fire in Oregon and saw the effects of a backward forest policy, a policy that has allowed for undergrowth to develop and provide the kindling necessary for explosive fires. I saw some interesting signs that -- save our mature large trees. I agree. I also saw the fires destroy the mature stands of large trees. It's unbelievable how powerful these fires raged throughout. And we've got to do something about it. A healthy forest initiative will help protect the resources of a resource-based economy.

I talked today -- we talked today about energy. The good folks in the state of Washington, or the capital -- people who spend money on capital investment know that we need to have an energy policy. Today, I talked about something that made eminent sense to me, and that is when you've got good, clean sources of energy like hydropower, you don't destroy those sources, particularly with the nation short of energy. And so we had a very good discussion about ways to create the conditions of economic vitality and growth.

And we had a very vital discussion. And the reason why I wanted to have this discussion is I'm concerned about the size of the unemployment rate here in this important state.

I'll answer a couple of questions, then I've got to go to another event. Jennifer.

Q Thank you, sir. I'm want to ask you about the Middle East.

Q Palestinians militants have promised more suicide bombings. Israel itself has talked about more pinpoint strikes on militants. What can you do to make sure that the progress in recent months doesn't get destroyed?

THE PRESIDENT: Yes, well, we'll just keep working the issue, of course, hard and reminding people of this important fact, that if people want there to be peace in the Middle East, if the Palestinians want to see their own state, they've got to dismantle the terrorist networks.

What the United States will continue to do is to remind those who love peace and yearn for freedom in that part of the world to join together and to battle those few who want to destroy the ambitions of many. I will continue to work with leaders in the neighborhood to encourage them to cut off the money and the aid and the help that goes to these terrorist organizations, all of which aim to destroy any hope for peace.

I am, and will continue to work the issue. I think it's important for us to -- for the United States to stay very much engaged, and I will.

Q Mr. President, it seems like the conflict in Iraq is becoming more of a guerrilla war directed against the West, or international institutions. How important is it that more countries contribute troops to Iraq? And are you willing to give more political authority to the United Nations to achieve that goal?

THE PRESIDENT: Yes, well, look, that's a very interesting question. It's -- the way I view this is Iraq is turning out to be a continuing battle in the war on terror. You know, it's one thing to remove the Saddam Hussein regime from power in order to protect America and our friends and allies, which we did. And then there are -- we found resistance from former Baathist officials. These people decided that, well, they'd rather fight than work for peaceful reconstruction of Iraq because they weren't going to be in power anymore.

I also believe there's a foreign element that is moving into Iraq and these will be al-Qaeda-type fighters. They want to fight us there because they can't stand the thought of a free society in the Middle East. They hate freedom. They hate the thought of a democracy emerging. And therefore, they want to violently prevent that from happening. And it's hard to characterize what kind of movement it is since this is the -- this is one of the major battles of the first war of the 21st century.

As I told the American people after 9/11, one, I would never forget 9/11 and the lessons learned about protecting the security of this country, but also that we were facing a different kind of war. And having said that, we do need and welcome more foreign troops into Iraq, and there will be more foreign troops into Iraq. And what that will do is that will enable many of those troops to guard the infrastructure. If you notice what's happening, of course, is as the life of the average Iraqi begins to improve, those who hate freedom destroy the infrastructures that we've been improving. It's part of their strategy. So we'll get more people guarding that.

And in the meantime -- and that will help free up our hunter teams. We're getting better human intelligence. Every day that goes by, we're getting more solid evidence from Iraqi citizens about the whereabouts of certain former thugs -- or current thugs of a former regime, is a better way to put it, like Chemical Ali. And we're winning.

And it's -- we've been there for 120 days since major operations, or something like that. We've haven't been there a long time. And these people -- let me finish. Just getting warmed up. (Laughter.) These people have been subjugated for years and years and years. Torture chambers were prevalent throughout the Iraqi society. Mass graves -- we discovered mass graves of innocent people whose lives were slaughtered because they didn't agree with Saddam Hussein. And you can imagine the psychology of a country that has been through a -- life under Saddam. Slowly but surely, people are now beginning to develop the habits necessary for a free society to emerge.

Now, what kind of mind-set is that? That's -- it is that type of mentality that we must defeat if we expect the world to be secure and peaceful.

And so, yes, there will be a vital role for the U.N. As a matter of fact, we're discussing regulation -- I mean, resolutions now about how to encourage other nations to participate in the process.

Q Sir, three tax cuts, two wars, and now, a new military role in Liberia. And your administration is now projecting deficits up near a trillion dollars this year and next. Meanwhile, a major jobless recovery as you've just mentioned here today in Washington, and Wall Street is becoming more and more nervous about the effect of these deficits in the long-term economy. Can this economy sustain long-term deficits?

Let me remind the people that -- to whom you're writing, this erudite article -- what caused the deficit. It was caused by the lack of revenues coming into the treasury because of a recession. Half of the deficit was because of the recession that took place in the first quarter -- first three quarters of 2001.

And then, we were at war. And I decided to request from Congress enough money to fight and win the war. That's what the American people expect. They expect a Commander-in-Chief to support the troops. And that's what I did, and will continue to do.

Part of the deficit is also caused by the fact that Congress passed the tax relief I asked for. But the reason I asked for the tax relief is to stimulate economic growth. And so, the -- those who are worried about the deficit must first worry -- I hope would worry first about people being able to find work, like in Washington state. I am more concerned about somebody finding a job than I am about numbers on paper.

But having said that, I want to repeat that we've got a plan to reduce the deficit in half in five years.

Final question, Bennett of the Houston Chronicle. I've known him for a long time. For those of you who don't know him, he's a fine lad. (Laughter.)

Q I have sort of a Texas-related question. Mr. President, next week there's going to be a report issued on the Space Shuttle Columbia that's expected to be highly critical of NASA. Do you support the resumption of manned-space flights? Do you think the program should be better funded and restructured? Where do you see the future?

THE PRESIDENT: Let me first -- I've been a strong supporter of NASA. I want to look at the report before I comment. You may have seen the report; I haven't, in which case, I want to look at it. I do believe that a space program is important for a country that is trying to stay on the leading edge of technological change. But let me look and first see what the report says, how critical it is, what it says, what it means. And I'll answer -- try to answer that very question after I've had a chance to enrich my knowledge about a pending report.

Q It's her birthday.

THE PRESIDENT: Today is your birthday?

THE PRESIDENT: You shouldn't be so shy in front of national cameras. (Laughter.)

Q I'd rather it not be a topic, thank you. (Laughter.)

THE PRESIDENT: Would you like for your compadres to break out in a "Happy Birthday" here on TV?

THE PRESIDENT: They have? Should we have the business community sing? (Laughter.) Happy birthday.