For Immediate Release
Office of the Press Secretary
July 23, 2003

THE PRESIDENT: Good afternoon, and welcome to the White House. Laura and I are really glad you all are here. We're especially pleased to welcome the distinguished guests we honor today, and their proud families and friends.

I appreciate former Secretary of State Madeleine Albright, for joining us today. Madam Secretary, thank you for coming. 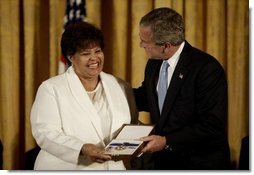 I'm honored that Kay Bailey Hutchinson from the great state of Texas -- (laughter) -- is here with us today. I appreciate the ambassadors who have joined us. I appreciate former Presidential Medal of Freedom recipients and their families who are here. Zbigniew Brzezinski is with us today; Liz Moynihan is the widow of Senator Moynihan; and Irving Kristol. I thank you all for coming.

The Presidential Medal of Freedom is America's highest civil award. It is conferred upon men and women of high achievement in the arts and entertainment, public service, science, education, athletics, business and other fields. For most recipients, this award is a special distinction added to many prior honors.

Some recipients are no longer with us, but are still highly regarded and fondly remembered. All who receive the Presidential Medal of Freedom have the continued respect of their peers and the lasting admiration of the American people.

Julia Child already holds the highest distinction of the French government -- (laughter) -- she was awarded the Legion of Honor for sharing with millions of Americans the appreciation and artistry of French Cooking.

Before Julia Child came along, no one imagined it could be so interesting to watch a meal being prepared. (Laughter.) The reason, of course, is Julia, herself -- her friendly way, her engaging conversation and her eagerness to teach. American cuisine and American culture have been enriched for decades by the unmistakable voice and the presence of Julia Child.

Americans are not always in the mood for exquisite meals. Sometimes all they want is a hamburger at the drive-up window. (Laughter.) And a lot of those windows are at places named for the daughter of Dave Thomas. The late founder of Wendy's left school without a diploma to begin working at a very young age.

His great success as a restauranteur allowed Dave to fulfill other ambitions in his life. He became a benefactor of good causes, especially the cause of adoption. Dave, himself, was orphaned at an early age, and many young men and women today can thank Dave Thomas for helping to join them with loving parents.

At the height of his career, Dave Thomas went back to school and earned a GED. His classmates voted him "most likely to succeed." (Laughter.) And today his country honors the hard work behind his success and the great generosity Dave Thomas showed others. 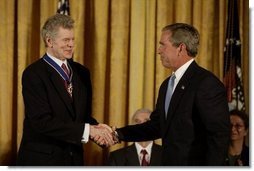 Van Cliburn was last here in 2001, as one of the Kennedy Center honorees. His life of honor started early, as the 23-year-old winner of the Tchaikovsky Competition in Moscow. In the years since, he has even further refined the gifts of a prodigy with the discipline and consistency of a true master. He has lived up the high standards of the music teacher who first inspired him: his mother, Rildia Bee Cliburn.

Today, throughout America and across the world, musicians find inspiration in his example, and all of us associate the name Van Cliburn with grace, and the perfect touch at the piano.

Like Van, the scholar Jacques Barzun, now lives in Texas. He began his life 95 years ago in France. He became an American citizen in 1933 and joined the faculty at Columbia University, and gained a reputation as a thinker of great discernment and integrity. From his first book, published 71 years ago, to his latest, a best-seller published in 2000, Jacques Barzun has influenced generations of serious readers. Few academics of the last century have equaled his output and his influence. And today he has the profound gratitude of his adopted country.

Charlton Heston is known for his portrayals of the most compelling dramatic figures: Moses, Judah Ben-Hur, Michelangelo, General Andrew Jackson, and Captain George Taylor. In the process, Charlton Heston, himself, has become one of the great names in film history. Over more than half a century his talent and intensity have proven big enough to fill any role.

The largeness of character that comes across the screen has also been seen throughout his life. During Charlton Heston's service in World War II, his leadership of a labor union, his activism on behalf of civil rights, and his principled defense of the Bill of Rights. Charlton Heston has left his mark on our country as an artist and as a citizen and as a patriot, and we're honored he is with us today.

We're also honored, as well, by the presence of an artist whose life brought two experiences he never could have expected, that of a prisoner and that of a President. In the days of Communist rule over Czechoslovakia, Vaclav Havel ridiculed the pretensions of an oppressive government and was viewed as an enemy of the state. The most subversive act of this playwright was telling the truth about tyranny. And when the truth finally triumphed in a "kindhearted revolution," the people elected this dignified, charming, humble, determined man to lead their country. Unintimidated by threats, unchanged by political power, this good man has suffered much in the cause of liberty and he has become one of liberty's great heroes.

When liberty was threatened by Nazism, a young Hungarian scientist named Edward Teller left Europe and found his way to the United States. Within a decade, the German Reich was at war with America and in search of the most terrible weapons. Dr. Teller joined the Manhattan Project and applied his disciplined mind to the most urgent task America had ever faced: to develop the atom bomb before Hitler.

Dr. Teller contributed to the success of that mission and helped us to meet other great national security challenges during the Cold War. In recent decades he has turned his efforts to the great scientific and moral task of building a defense against ballistic missiles. For a long life of brilliant achievement and patriotic service, America is in debt to Dr. Edward Teller.

Professor James Q. Wilson may be the most influential political scientist in America since the White House was home to Professor Woodrow Wilson. Throughout his career, he has demonstrated the best virtues of the academic profession. His theories and ideas are drawn from actual human experience, and therefore have great practical value in addressing social problems. He writes with authority on a range of subjects, from the workings of government to the causes and prevention of crime. Whatever his subject, James Q. Wilson writes with intellectual rigor, with moral clarity, to the appreciation of a wide and growing audience. And it is my honor to congratulate Professor James Q. Wilson.

Of the 108 Americans who have served on the Supreme Court of the United States, only one is also in the College Football Hall of Fame. Justice Byron White was a rare kind of person who seemed to excel at everything he attempted. Whether playing football or earning a Bronze Star in World War II or enforcing civil rights as Deputy Attorney General, Byron White was tough and he was determined.

When he was nominated, his close friend at the Supreme Court, President John F. Kennedy, called Byron White a man of "character, experience, and intellectual force." Over the next three decades, Justice White showed those qualities in majority opinions of great depth, and in dissenting opinions of great wisdom and courage. When he passed away last year, people across our country felt that loss of a superb judge and a great American.

John Wooden is also a Hall of Famer, one of the only two enshrined both as basketball player and basketball coach. In a legendary career, Coach Wooden led his teams to 885 victories, with only 203 losses. His players included some of the all-time greats: Kareem Abdul-Jabbar, and Bill Walton, and Gail Goodrich, to name a few.

But all his players will tell you, the most important man on their team was not on the court. He was the man who taught generations of basketball players the fundamentals of hard work and discipline, patience and teamwork. Coach Wooden remains a part of their lives as a teacher of the game, and as an example of what a good man should be. Nell Wooden, the coach's wife of 53-years, would be incredibly proud of him again. Coach Wooden, it's wonderful to see you with us today.

Another recipient this afternoon would have been 69 years old next month. Millions of Americans remember hearing the news that Roberto Clemente had been lost on a mission to help the people of Nicaragua after an earthquake. His full name was Roberto Clemente Walker, and in an era of Mays, and Mantle, and Aaron, he ranked as one of the greats.

He was a young man with a quick bat, a rifle arm, and a gentle heart. In the words of one baseball executive, "I never saw any ballplayer like him. No, sir ... whenever anybody signs a big contract these days, we always wonder how many millions Clemente would be worth." As a former team owner, it would be a lot. (Laughter.)

Yet the true worth of this man, seen in how he lived his life, and how he lost his life, cannot be measured in money. And all these years later, his family can know that America cherishes the memory of Roberto Clemente.

Our country and our world have been improved by the lives of the men and women we honor today. And now it is my honor to present the awards, and I ask the military aide to read the citations.

(The Presidential Medals of Freedom are presented.) (Applause.)

THE PRESIDENT: Thank you all for coming. Laura and I would now like to invite you to join us for a reception to honor these great Americans and great member of the Czech Republic, our great friend.

Thank you all for coming, God bless. (Applause.)