For Immediate Release
Office of the Press Secretary
July 10, 2003

PRESIDENT MOGAE: Ladies and gentlemen of the press, honorable ministers, you are probably wondering what we have been talking between the President and I. And I was just thanking him for, first of all, visiting us, but, above all, for the generous assistance we have been receiving. 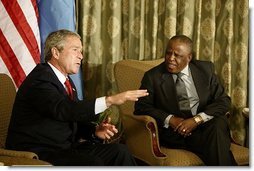 As you know, we are the country in southern Africa that is most seriously affected by HIV/AIDS, and we are receiving generous assistance from the United States government, who are helping us with the testing and counseling centers and in which we are spending about $8 million U.S. a year, which is about 40 million pula in our own currency.

They have also responded to a request for human resources assistance and they have restored the Peace Corps program. We are collaborating with our own private sector, the foundations in the United States -- the Bill and Melinda Gates Foundation, the Merck Corporation Foundation for providing us with anti-retrovirals, and also with assistance for mounting of our prevention campaign.

That program is going very well. I mention that, it is the most important -- but also we are very grateful for AGOA, on behalf of ourselves, on behalf of Africa as a whole, because most African countries have benefitted by AGOA. I was telling the President that in my view, AGOA is perhaps the most significant thing that United States has done for sub-Saharan Africa in recent decades.

As some of us some of you will know, initially Namibia and us, and Botswana, were left out of AGOA I as a result of the level of our -- (inaudible) -- and we have since been included under AGOA II. And so the only issue is that the dispensation, that concession should be maintained, therefore, as long as AGOA remains. Because, like the President, we believe in trade -- of course, we believe in aid, too. (Laughter.) So both aid and trade and cooperation.

So that's what we have been talking about -- of course, other things. But, of course, there are a whole range of issues on which we consulted reaching across the region -- performance of our economy, but the region of the south -- of southern Africa and then sub-Saharan Africa as a whole.

PRESIDENT BUSH: Mr. President, thanks. Listen, we're so honored that you invited us here. We're thrilled to be here. You have been a very strong leader. First, I want to commend you for your leadership. I appreciate your commitment to democracy and freedom, to rule of law and transparency. I want to congratulate you for serving your country so very well. 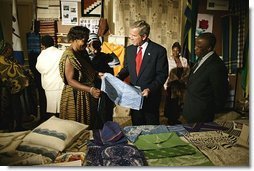 I talked -- spent some time on the HIV/AIDS issue. Botswana, as a result of the President's leadership, has really been on the forefront of dealing with this serious problem by, first and foremost, admitting that there is a problem, and then by working to put a strategy in place to prevent and treat and to provide help for those who suffer.

And, Mr. President, the United States of America stands squarely with you --

PRESIDENT BUSH: -- with you and your Health Minister and your administration to help put together a strategy that will save lives.

We talked about the shortage of food in parts of Africa. We had a wide-ranging discussion. And President Mogae is a strong, visionary leader who I'm proud to call friend.

So, thank you, Mr. President, for your hospitality.

We'll be glad to answer a couple of questions. If you'd like to call on somebody from your press corps first.

PRESIDENT MOGAE: Does anyone want to ask --

PRESIDENT BUSH: That's not the way we do it in -- (laughter.)

Q To the U.S. President, yesterday when you met President Mbeki of South Africa, the MDC leader in Zimbabwe was not very excited about that. He feels you were misled. What are your views on that? Did you have any plans for Zimbabwe and did you shelve them because of what you heard yesterday, or are you still going to go ahead with them?

PRESIDENT BUSH: Well, thank you very much. I made it very clear, publicly, the position of this administration, and that is that we expect there to be democracy in Zimbabwe, in order for the people of that country to advance. We did speak about Zimbabwe here. I explained why the Secretary of State and myself have been very outspoken on the subject. And we had a frank discussion with President Mbeki on Zimbabwe, as well.

It is -- it's a shame that that economy has gotten so weak and soft. It's a shame for Botswana, it's a shame for southern Africa, and that the weakness in the economy is directly attributable to bad governance. And therefore, we will continue to speak out for democracy in Zimbabwe.

Ryan of Bloomberg. There he is. Hi, Ryan. How are you?

Q Mr. President, in Evian, you and the Europeans talked about maybe reducing agricultural subsidies. Is this something that has come up in your meeting today? And what assurances can you give to your African counterparts that this is something that the U.S. is serious about?

PRESIDENT BUSH: Yes, that's a very good question. Absolutely, the subject of agricultural subsidies came up here today, it came up yesterday. I suspect and it came up in Senegal. It will come up in every country we come to, because African leaders are worried that subsidies, agricultural subsidies are undermining their capacity to become self-sufficient in food. That's part of the problem.

The other part of the problem is the lack of technological development in agriculture. And we talked about the need for genetically-modified crops throughout the continent of Africa.

I told them the reality of the situation, that we have proposed a very strong reduction in agricultural subsidies. However, in order to make that come to be, there needs to be reciprocation from Europe and Japan in order to make the policy effective. We're committed to a world that trades in freedom and we will work toward that through the Doha Round of the World Trade Organization.

PRESIDENT BUSH: This is a bad precedent where the same person gets to ask two questions. (Laughter.)

Q There was a sentiment that Your Honor was going to ask the U.S. President if AGOA, the lifespan of AGOA could be extended. Was that done today?

Q And for how long?

PRESIDENT BUSH: Well, I've asked Congress to extend AGOA to '08, 2008. And the President, of course, said, well, fine, if that extension takes place, make sure we're a part of it. And he made his case very explicitly. Everybody in the delegation heard him clearly. And my response was, we will work closely with you to see if that can't happen.

PRESIDENT BUSH: No, no, please don't do that. It may be the last question you get if you try. (Laughter.) Go ahead.

Q On this trip you've highlighted a lot of different success stories in Africa, the countries that have been successful in fighting AIDS or on trade. What do you hope Americans who are watching you take from your trip here? And then, secondly, on Iraq, given the sort of day-to-day challenges facing American soldiers there, how important, or is it increasingly important to find Saddam Hussein and any updates on a hunt for him to really convince people he might be gone for good?

PRESIDENT BUSH: Well, let me start with Iraq. Having talked to Jerry Bremer, the man in charge of the civilian operations there, he believes that the vast majority of Iraqi citizens are thrilled that Saddam Hussein is no longer in power. Secondly, there's no question we've got a security issue in Iraq, and we're just going to have to deal with person by person. We're going to have to remain tough.

Now, part of the issue that we've got to make clear is that any terrorist acts on infrastructure by former Baathists, for example, really are attacks on the Iraqi people, and therefore, the more involved the Iraqi citizens become in securing their own infrastructure, and the more involved Iraqi citizens are in the transitional government, the more likely it is the average citizen will understand that once again the apologists for Saddam Hussein are bringing misery on their country.

The world will see eventually as freedom spreads that -- what Saddam Hussein did to the mentality of the Iraqi people. I mean, we've discovered torture chambers where people, citizens were tortured just based upon their beliefs. We've discovered mass graves -- graves for not only men and women, but graves for children. We discovered a prison for children -- all aimed at -- for Saddam Hussein to intimidate the people of Iraq. And slowly, but surely, the people of Iraq are learning the responsibility that comes with being a free society.

We haven't been there long. I mean, relatively speaking. We've been there for 90 to 100 days -- I don't have the exact number. But I will tell you, it's going to take more than 90 to 100 days for people to recognize the great joys of freedom and the responsibilities that come with freedom. We're making steady progress. A free Iraq will mean a peaceful world. And it's very important for us to stay the course, and we will stay the course.

The first question was about what I want Americans to know. The first thing I wanted the leadership in Africa to know is the American people care deeply about the pandemic that sweeps across this continent, the pandemic of HIV/AIDS; that we're not only a powerful nation, we're also a compassionate nation.

You know, I laid out a very strong initiative on helping countries in the continent of Africa deal with AIDS. It's a -- to me, it's an expression of the great, good heart of the American people. It doesn't matter what political party or what the ideology of the American citizen, the average citizen cares deeply about the fact that people are dying in record numbers because of HIV/AIDS. We cry for the orphan. We care for the mom who is alone. We are concerned about the plight, and therefore, will respond as generously as we can.

That's really the story that I want the people of Africa to hear. And I want the people of America to know that I'm willing to take that story to this continent and talk about the goodness of our country. And I believe we'll be successful when it's all said and done of making our intentions well-known.

Listen, thank you all.