For Immediate Release
Office of the Press Secretary
July 1, 2003

President Discusses Progress in Afghanistan, Iraq
Remarks by the President at Reenlistment of Military Service Members
The East Room

THE PRESIDENT: Please be seated. (Applause.) Welcome. Thank you all very much. Welcome to the White House. We're joined today by 30 men and women who have chosen to reenlist in the United States Armed Forces. Each of them decided years ago to serve and defend our country. Today they reaffirm their commitment and take the oath again. 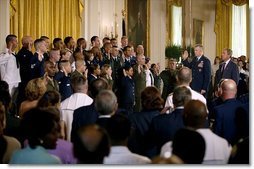 Like many thousands of other soldiers, sailors, airmen, Coast Guardsmen and Marines who will re-enlist this year, these men and women are answering the highest call of citizenship. They have stood between the American people and the dangers of the world -- and we are glad they are staying on duty. (Applause.)

I appreciate Admiral Vernon Clark, the Chief of Naval Operation for being here; General Michael W. Hagee, the Commandant of the Marine Corps; General John M. Keane, Acting Chief of Staff for the Army. I appreciate Terry D. Scott, Master Chief Petty Officer of the Navy, for being with us today; John L. Estrada, Sergeant Major of the Marine Corps; Frank A. Welch, Master Chief Petty Officer of the Coast Guard; members of the Armed Forces and our fellow Americans.

Before the draft ended on July 1st, 1973, generations of men entered military service by the decision of others. And during two world wars, and in Korea, and in Vietnam, they served nobly and they served well. Yet in the past 30 years, we have seen the great advantages of a military in which all serve by their own decision. Our country's all-volunteer force attracts idealistic and committed young Americans. They stay in service longer because they have chosen the military life. The result is a military with the highest levels of training, experience, motivation, and professionalism.

The military life is rewarding. Yet, even at its best, that life is difficult, often involving separation and danger. Those who willingly make these sacrifices, and the families who share their hardships, have the respect and the gratitude of their fellow Americans.

All in our military are serving in one of history's critical hours. Less than two years ago, determined enemies of America entered our country, committed acts of murder against our people, and made clear their intentions to strike again. As long as terrorists and their allies plot to harm America, America is at war. We did not choose this war. Yet, with the safety of the American people at stake, we will continue to wage this war with all our might.

From the beginning, we have known the effort would be long and difficult, and that our resolve would be tested. We know that sacrifice is unavoidable. We have seen victories in the decisive defeat of two terror regimes, and in the relentless pursuit of a global terror network. Yet the war on terror goes on. We will not be distracted, and we will prevail. (Applause.)

Of those directly involved in organizing the September the 11th attacks, almost all are now in custody or confirmed dead. Of the senior al Qaeda leaders, operational managers, and key facilitators we have been tracking, 65 percent have been captured or killed.

Still, we recognize that al Qaeda has trained thousands of foot soldiers in many nations and that new leaders may emerge. And we suspect that some al Qaeda deserters will attach themselves to other terrorist groups in order to strike American targets. Terrorists that remain can be certain of this: We will hunt them by day and by night in every corner of the world until they are no longer a threat to America and our friends. (Applause.)

At this moment, American and allied forces continue the work of fighting terrorists and establishing order in Afghanistan. When we removed the Taliban from power, surviving al Qaeda members fled from most of that country. However, many terrorists sought sanctuary along the Afghanistan-Pakistan border, and some are still hiding there. These al Qaeda and Taliban holdouts have attacked allied bases with unguided rockets, conducted ambushes, and fired upon border posts. In close cooperation with the Afghan and Pakistani governments, America is engaged in operations to find and destroy these terrorists.

Since the beginning of Operation Enduring Freedom, it is important for our fellow citizens to know that Pakistan has apprehended more than 500 terrorists, including hundreds of members of al Qaeda and the Taliban.

As this fight continues, the people of Afghanistan are moving forward with the reconstruction of their country and the founding of a democratic government. They have selected a President. They're building a national army. And they are now in the final stages of drafting a new constitution.

America and other countries continue to provide humanitarian aid and assistance in building clinics and schools and roads. Joined by other nations, we are deploying the first group of provincial reconstruction teams to various cities in Afghanistan, groups of experts who are working with local officials to improve public safety, promote reconstruction, and solidify the authority of elected governments.

Afghanistan still has many challenges, but that country is making progress, and its people are a world away from the nightmare they endured under the Taliban. Pakistan and Afghanistan are among many governments that understand the threat of terror and are determined to root it out.

After the terrible attacks in Riyadh on May the 12th, the government of Saudi Arabia has intensified its longstanding efforts against the al Qaeda network. Recently Saudi's security services apprehended Abu Bakr, believed to be a central figure in the Riyadh bombing, and killed a major al Qaeda operational planner and fundraiser, a man known in terrorist circles as "Swift Sword."

Saudi authorities have also uncovered terrorist operations in the holy city of Mecca, demonstrating once again that terrorists hold nothing sacred and have no home in any religion. America and Saudi Arabia face a common terrorist threat, and we appreciate the strong, continuing efforts of the Saudi government in fighting that threat.

The war on terror also continues in Iraq, where coalition forces are engaging remanent of the former regime, as well as members of terrorist groups. We met the major combat objectives in Operation Iraqi Freedom. We ended a regime that possessed weapons of mass destruction, harbored and supported terrorists, suppressed human rights, and defied the just demands of the United Nations and the world.

The true monuments of Saddam Hussein's rule have been brought to light -- the mass graves, the torture chambers, the jail cells for children. And now we are moving forward with the reconstruction of that country by restoring basic services, maintaining order, searching for the hidden weapons, and helping Iraqis to establish a representative government.

The rise of Iraq as an example of moderation and democracy and prosperity is a massive and long-term undertaking. And the restoration of that country is critical to the defeat of terror and radicalism throughout the Middle East. With so much in the balance, it comes as no surprise that freedom has enemies inside of Iraq. The looting and random violence that began in the immediate aftermath of war remains a challenge in some areas. A greater challenge comes from former Baath Party and security officials who will stop at nothing to regain their power and their privilege.

But there will be no return to tyranny in Iraq. And those who threaten the order and stability of that country will face ruin, just as surely as the regime they once served.

Also present in Iraq are terrorist groups seeking to spread chaos and to attack American and coalition forces. Among these terrorists are members of Ansar al-Islam, which operated in Iraq before the war and is now active in the Sunni heartland of the country. We suspect that the remnants of a group tied to al Qaeda associate al-Zarqawi are still in Iraq, waiting for an opportunity to strike. We're also beginning to see foreign fighters enter Iraq.

These scattered groups of terrorists, extremists and Saddam loyalists are especially active to the north and west of Baghdad, where they have destroyed electricity lines and towers, set off explosions at gas pipelines and ignited sulfur fires. They have attacked coalition forces and they're trying to intimidate Iraqicitizens. These groups believe they have found an opportunity to harm America, to shake our resolve in the war on terror, and to cause us to leave Iraq before freedom is fully established. They are wrong, and they will not succeed. (Applause.)

Those who try to undermine the reconstruction of Iraq are not only attacking our coalition, they are attacking the Iraqi people. And we will stand with the Iraqi people, strongly, as they build a hopeful future. Having liberated Iraq as promised, we will help that country to found a just and representative government, as promised. Our goal is a swift transition to Iraqi control of their own affairs. People of Iraq will be secure, and the people of Iraq will run their own country.

At present, 230,000 Americans are serving inside or near Iraq. Our whole nation, especially their families, recognizes that our people in uniform face continuing danger. We appreciate their service under difficult circumstances, and their willingness to fight for American security and Iraqi freedom. As Commander-in-Chief I assure them, we will stay on the offensive against the enemy. And all who attack our troops will be met with direct and decisive force.

As America fights our war against terror, we will continue to depend on the skill and the courage of our volunteer military. In these last 22 months, our Armed Forces have been tested and tested again. In every case, in every mission, America's servicemen and women have brought credit to the uniform, to our flag, and to our country. We have needed you, and you have never let us down.

And now, General Myers will administer the oath of enlistment in the Armed Forces of the United States. May God bless you. (Applause.)