For Immediate Release
Office of the Press Secretary
June 27, 2003

THE PRESIDENT: Good morning. I'm pleased to be joined by the Federal Trade Commission Chairman, Tim Muris, and Federal Communications Commission Chairman, Michael Powell. I also want to thank their -- members of their staffs who have joined us today. I appreciate your hard work on a -- in an interesting and important initiative. We are announcing new measures by the federal government that will help Americans protect their private time or family time by blocking unwelcome phone calls from telemarketers. 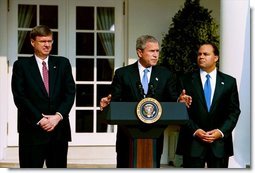 Unwanted telemarketing calls are intrusive, they are annoying, and they're all too common. When Americans are sitting down to dinner, or a parent is reading to his or her child, the last thing they need is a call from a stranger with a sales pitch. So we're taking practical action to address this problem.

The Federal Communications Commission has joined with the Federal Trade Commission to create a National Do Not Call Registry, a tool that will help ensure that telemarketers respect the privacy of our nation's citizens. This registry will allow people to limit most unwanted telemarketing calls by registering their home or cell phone numbers. Registration can be completed by phone or over the Internet, and it is free of charge. The service also comes at no expense to the taxpayers. After all, it is fully funded by the telemarketing industry.

Response to the initial proposal to create the do-not-call list was very strong. The FTC received more than 60,000 comments that overwhelmingly supported the registry's creation. After a number is registered, commercial telemarketers will be required to remove that number from their call list within three months. In addition, most states that already have similar do-not-call lists will transfer their numbers to the national registry.

Citizens interested in finding out more about the Do Not Call Registry and how to register telephone numbers should visit donotcall.gov -- should call up on the Internet, donotcall.gov, and they will find out how to place their number in the registry. Chairman Muris and Chairman Powell told me that as of today, starting last night, as of today, 108 persons per second are now registering their phone numbers.

I want to commend the FTC and the FCC and the United States Congress for their good work on behalf of American consumers.

I'm also pleased by the votes last night in the United States Senate and the United States House of Representatives to improve Medicare and to extend prescription drug coverage to our seniors. A stronger Medicare system that gives our seniors more choices and better benefits has been a central priority of my administration. I urge the Congress to reconcile their differences and to get a bill to my desk as quickly as possible.