For Immediate Release
Office of the Press Secretary
June 18, 2003

President Discusses Medicare, Iraq, Iran and the Middle East
Remarks by the President in Meeting with Bipartisan Senators on Medicare Reform
The Cabinet Room

THE PRESIDENT: I want to thank the members of the United States Senate for coming to discuss the issue of Medicare. I want to congratulate Leader Frist, as well as Chairman Grassley and Ranking Member Baucus, for really fine work on the Finance Committee to get a important piece of legislation moving. We're committed to reforming the Medicare system so America's seniors get the health care they need. 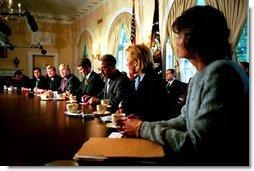 These Senators around the table have got to work together to see that we get a good plan. And I asked them to come so I can figure out ways that our administration can continue to help the process move forward. The work has been really strong thus far. And I want to congratulate you all for fine leadership. Welcome to the White House.

Q Mr. President, Tony Blair is in a bit of trouble at home. He's got a couple of ex-cabinet officials contending he may have exaggerated information on weapons of mass destruction. He stood by you. Do you plan on saying anything to back him up at home?

THE PRESIDENT: I'll say something right now. He operated on very sound intelligence. And those accusations are simply not true.

Q Are you hoping the protesters in Iran will topple the Iranian government? And now that the IAEA report is out, how are you going to stop them from getting a nuclear weapon?

THE PRESIDENT: Well, the international community must come together to make it very clear to Iran that we will not tolerate the construction of a nuclear weapon. Iran would be dangerous if they have a nuclear weapon. I brought this subject up in the G8; we had a good discussion on the subject, with near universal agreement that we all must work together to prevent Iran from developing a nuclear weapon.

And secondly, I appreciate those courageous souls who speak out for freedom in Iran. They need to know America stands squarely by their side. And I would urge the Iranian administration to treat them with the utmost of respect.

Q Mr. President, do you plan to send Dr. Rice to the Middle East soon, particularly given the situation --

THE PRESIDENT: I'll let you know when we decide to do so. We, of course, have got Ambassador Wolf in the region now and he's working hard with both parties. And I called President Mubarak today to ask him to work with the Palestinian Authority to consolidate their security forces under Prime Minister Abbas, so that the Prime Minister can achieve the goals that he set out, which is for -- for the dismantlement of terror, and what hopefully will be a peaceful Palestinian state.

Q You do anticipate sending --

THE PRESIDENT: I said, I'll let you know when we send her.