For Immediate Release
Office of the Press Secretary
June 17, 2003

THE PRESIDENT: Thanks for coming to the White House on Champions Day, the day we honor our national -- our nation's champs.

I first want to say that, obviously, you know how to play hoops in the East. (Laughter and applause.) As our Texas teams found out. (Laughter.) And it seems like Minnesota is pretty good at hockey, too. (Applause.) 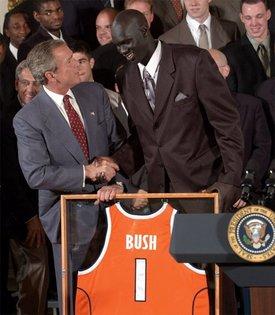 I now know why we've got all these senators from New York and Minnesota and Connecticut, as well as members of the House from those three states. Welcome. And thank you all for honoring these fine student athletes. We're glad you're here.

I want to welcome the University of Connecticut Women's Basketball team back to the White House. Geno told me last time that -- last time I greeted them here -- that they would be back. He really didn't say it that way -- we'll play like he said it that way; makes a better story. (Laughter.) At any rate, congratulations to you all.

I appreciate Jeffrey Hathaway coming, as well. These ladies can flat play basketball, and they are a great credit to women's athletics and to sport. They'll probably be back next year, too. (Applause.) We're really glad you're here, and I'm glad Diana has given me the jersey. Thank God I don't have to guard her. (Laughter.)

I also want to welcome the University of Minnesota-Twin Cities Men's Hockey team back here again, as well. I appreciate Don Lucia. I want to thank Athletic Director, Joel Maturi, as well, for coming. It's good to see these men back. They also know how to play hockey really well. They told me they'd be back again -- (laughter) -- next year. Senator Dayton was a heck of a goalie in his day, but I don't know if he could stop these guys or not. (Laughter.) I know the state of Minnesota is proud of your accomplishments. We're really glad you're here.

And we're also glad that the ladies hockey team from the University of Minnesota-Duluth is here. It's good to see Dr. Martin. Thank you for coming back -- as well as Shannon Miller. She's been the coach for four years and has won three national championships. (Applause.) It sounds like to me, Dr. Martin, you'd better give her a raise. (Laughter.) It's a state issue, of course. (Laughter.) But congratulations to you all.

I also want to congratulate Syracuse for winning their first national championship. It's a great tribute to Jim Boeheim, who is a heck of a guy and a great leader of men. Congratulations, Coach. I know you've worked hard for this. (Applause.) If it wasn't the University of Texas, I'm glad it was you. (Laughter.)

You've got some great players on your team. I'm sure some of us are going to be asking Carmelo Anthony for a loan one of these days. (Laughter.) So keep the interest rates low. (Laughter.) But congratulations on winning a tough tournament. You're a great credit to the sport. 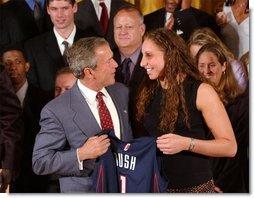 I also want to welcome Mike Tirico, who is here. Where are you, Mike? Oh, there you are. Congratulations on being a Syracuse grad. I know you were objective in your analysis of the -- (laughter) -- of the tournament. But thanks for coming.

The other thing that's important about a championship team is to -- for people to understand that you can be a champ on the court or on the ice, as well as off the court and off the ice.

I've asked Dr. Martin if she remembered what I said last year about people serving their communities in which they live. She said, you bet; we've got girls on our team who are mentoring. One girl said she works for the Boys and Girls Club.

My call to the champs is to be a champ off the playing -- when you're not playing, as well. You've got a chance to make a difference in somebody's life. There's always some little kid draped over the -- draped over the ice, looking at the star Minnesota players, wondering what it's like to be a star. And a star is somebody who sets a good example. A star is somebody who says, I've got some God-given talents, and I want to help somebody else utilize his or her talents so they can realize the American Dream.

There's always some little guy hanging around, or some girl hanging around courtside watching champs, watching behavior. And you have a chance as champions to set such a good example for America's young so that the next generation of athletes will know what it means to be a champ on the court, or on the rink, as well as off the court and off the rink.

And so I'm here today to congratulate you for setting such a good example. Now that the spotlight is on you, assume responsibility. Do you job as an American. Love somebody just like you'd like to be loved yourself, and America will be a better place for it.

Welcome to the White House. May God bless your talents, and may God continue to bless our great country. Thank you very much. (Applause.) 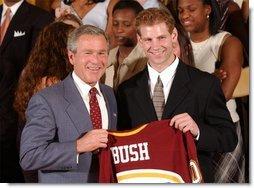 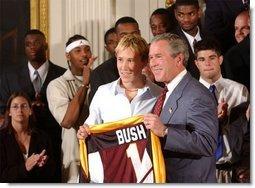