For Immediate Release
Office of the Press Secretary
June 11, 2003

THE PRESIDENT: Today there was a terrible bombing in Jerusalem. I send my heartfelt condolences to those who suffered and lost life.

It is clear there are people in the Middle East who hate peace; people who want to kill in order to make sure that the desires of Israel to live in secure and peace don't happen; who kill to make sure the desires of the Prime Minister of the Palestinian Authority and others of a peaceful state, living side-by-side with Israel, do not happen. 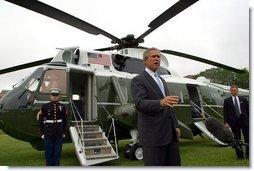 To the people in the world who want to see peace in the Middle East, I strongly urge all of you to fight off terror, to cut off money to organizations such as Hamas, to isolate those who hate so much that they're willing to kill to stop peace from going forward. I strongly condemn the killings, and I urge and call upon all of the free world, nations which love peace, to not only condemn the killings, but to use every ounce of their power to prevent them from happening in the future.