For Immediate Release
Office of the Press Secretary
June 9, 2003

President Discusses Middle East, Iraq and the Dollar in Cabinet Meeting
Remarks by the President in Photo Opportunity After Meeting with Cabinet
The Cabinet Room

THE PRESIDENT: I just met with my Cabinet, had the opportunity to brief them about my trip overseas. I talked about the visit to Poland and to Russia, where we've got good friends in both those countries -- at least in terms of their leaders.

And then I went to the G8 in Evian, France. The message there was is that America and Europe can do a lot together. We can make the world more peaceful, we can make the world more free, we can work together to help fight the pandemic of AIDS in Africa. There's a lot we can do together. We need to put our differences in the past and combine our efforts. We can do -- trade together so our people can find work. And I left feeling very good about our relations in Europe. 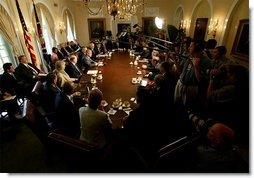 Then I went to the Middle East and started the -- started the march to peace. And I'm optimistic about our chances to bring a peaceful, free Palestinian state in existence, to live by side-by-side with a secure Israel. We've got a lot of work to do, but I was pleased with the response of Prime Minister Sharon. He's a courageous leader, dedicated to the security of the Israeli people, as are we -- but also recognizing that life can be better for the Palestinians.

And I appreciate the leadership of Prime Minister Abbas, the new Prime Minister of the Palestinian Authority, who spoke eloquently and clearly about the need for the free world to fight off terror in order for a Palestinian state to emerge.

And then I went over to Qatar. Had a very good visit with Ambassador Bremer and General Tommy Franks, and we talked about the need for our coalition to continue to make steadfast progress in Iraq so that the people of Iraq will be able to eventually run themselves. And we are making steadfast progress.

Finally, we talked about domestic matters. Secretary Snow briefed us on the economy. And we're optimistic about our economy, but we won't rest until we're certain that people who are looking for work and who want to work can find a job. The jobs and growth package passed by the Congress can be very beneficial to those who look for work.

We also talked about the possibilities of Congress getting a good Medicare bill out. I will spend time this week discussing Medicare with the American people. Secretary Thompson briefed us on the progress being made by the Congress, and I want to thank the congressional leadership for showing the determination that's going to be necessary to get a good Medicare package out for America's seniors.

I'm proud of my Cabinet. I want to thank them for their good work and really proud of the team we have put together here.

I'll answer a few questions. Tom, and then Patsy.

Q Mr. President, since you left the Middle East there's been a new outbreak of violence, three main Palestinian militant groups have claimed responsibility for it. Prime Minister Abbas says he will not use force to control these groups and Prime Minister Sharon has been criticized by right-wing members of his own party. Why are you so optimistic?

THE PRESIDENT: I'm optimistic because I was able to listen to the Prime Ministers of Israel and the Palestinian Authority talk about the need for peace and for a state.

Listen, I recognize there's going to be extremes, particularly in the Palestinian territories, that want to blow up peace. But I think people are sick of it. The average Palestinian must understand that their lives will improve with the vision of Prime Minister Abbas. And the Arab neighborhood understands that violence will lead to nothing except misery and the lack of hope. And so I'm optimistic that responsible leaders have now got the message that we must combine to work to fight off the terror attacks so that a peaceful Palestinian state can emerge.

And, listen, I understand there's going to be a lot of work to do, but I'm prepared to lead. And we're sending a team in place. Ambassador Wolf will be on the ground soon, holding people to account and working to strengthen Prime Minister Abbas so that he can deliver on his promise -- a promise he made not only to me personally, but a promise he made to the Israeli officials. And the promise was is that he will work as hard as he can to fight off those elements within the territories that want to use violence to destroy any hope for peace, and, therefore, use violence to destroy the hopes of the Palestinian people.

Q Sir, is U.S. credibility on the line over weapons of mass destruction in Iraq?

I read a report that somehow, you know, that there is no al Qaeda presence in Baghdad. I guess the people who wrote that article forgot about Al Zarqawi's network inside of Baghdad that ordered the killing of a U.S. citizen named Foley. And history will show, history -- time will prove that the United States made the absolute right decision in freeing the people of Iraq from the clutches of Saddam Hussein.

Q Sir, do you have anything for us on the dollar? It continues to slide.

Q The rhetoric continues to be that we favor a strong dollar policy, but there doesn't seem to be much of anything helping to prop it up.

THE PRESIDENT: The policy of this government is a strong dollar policy. I spent time talking about the -- our dollar policy at the G8. And I reminded our G8 partners that there is a difference in interest rates, particularly between Europe and the United States, and that interest rate differential has caused people to sell dollars to buy euros to get a higher return on investment. And that's why you're seeing pressure on the dollar.

And, of course, the European Union is, like the United States, has got an independent organization that sets monetary policy. But you'll see a -- you'll see different behavior as interest rate spreads begin to narrow between Europe and the United States.

But I'll repeat as clearly as I can, the policy of the United States government is a strong dollar policy.