For Immediate Release
Office of the Press Secretary
June 3, 2003

PRESIDENT MUBARAK: Today we have met with the President of the United States, President George Bush, to affirm our common commitment to seize this historic moment to advance the peace cause forward. 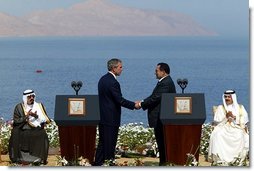 President Bush gave impetus to the peace process by his vision of two states, Israel and Palestine, living in peace and security. This vision means that, alongside the existing state of Israel, a new state for the Palestinians will emerge.

We welcome the road map rising from this vision, and adopted by the Quartet, especially since it has been accepted by both the Israeli and Palestinian governments. We particularly express our appreciation for President Bush's strong personal commitment for its full implementation.

The road map provides for ending the occupation that began in 1967, and resolving the Israeli-Palestinian conflict by 2005, through fulfillment of all sides to their own obligations. Peace obligations are built on the foundations of the Madrid Conference, the principles of land for peace, and U.N. Security Council resolutions 242, 338, and 1397, and the initiative of Saudi Crown Prince Saud Abdallah Aziz, which was unanimously endorsed by the Arab League Summit in Beirut.

We call on Israel to simultaneously fulfill its own responsibilities to rebuild trust and restore normal Palestinian life, and to carry out its other obligations under the road map, thus promoting progress toward the President's vision.

We affirm our position again against terror and violence. We will continue to fight the scourge of terrorism against humanity, and reject the culture of extremism and violence in any form or shape, from whatever source or place, regardless of justifications or motives, being fully aware of their danger as a plague that threatens the peace and stability of the whole world. We will use all the power of the law to prevent support reaching illegal organizations, including terrorist groups.

We reiterate our support for the Iraqi people as they rebuild their country. We affirm our commitment once more, the independence and the territorial integrity of Iraq under a government that represents the Iraqi people and emanating from its free will; where Iraqi people living in peace and harmony with its neighbors. And in this regard, we consider U.N. Security Council Resolution 1483 as a useful means to achieve these goals.

As the countries of this region continue their important endeavors to promote political, economic and social reforms, we welcome the initiative by the United States to open new economic opportunities for all the people in the Middle East. We shall continue to work for a Middle East that is free of strife and violence, living in harmony, without the threat of terrorism or dangers of weapons of mass destruction.

Mr. President, thank you for your hospitality and for the invitation to this spectacular location.

Achieving these goals will require courage and moral vision on every side, from every leader. America is committed, and I am committed, to helping all the parties to reach the hard and heroic decisions that will lead to peace.

I want to thank Crown Prince Abdallah, King Hamad, King Abdullah, Prime Minister Abbas for joining us today. I particularly want to thank President Mubarak. The United States values its strong ties with Egypt. By hosting this gathering, President Mubarak is acting in Egypt's best traditions. His predecessor, Anwar Sadat, was a leader for peace who had the vision to see opportunities and the bold heart to seize them. In this spirit, we meet today.

Last year on June 24th, I put forth a proposal for two states, Israel and Palestine, living side-by-side in peace. I called on Israel to respect the rights of Palestinians, including the right to live in dignity in a free and peaceful Palestine. I urged the Palestinian people to embrace new leaders who stand for reform, democracy and for fighting terror.

I also said that progress toward peace would require the active commitment and support of neighboring states. And today I'm pleased to stand with leaders of the Arab world, who are committed to these principles.

All progress towards peace requires the rejection of terror. The leaders here today have declared their firm rejection of terror, regardless of its justifications or motives. They've also committed to practical actions to use all means to cut off assistance, including arms and financing to any terror group, and to aid the Palestinian Authority in their own fight against terror.

Tomorrow, I will go to Aqaba for a meeting with Prime Minister Sharon, Prime Minister Abbas, to discuss the responsibilities of the Israelis and the Palestinians. And if all sides fulfill their obligations, we can make steady progress on the road toward Palestinian statehood, a secure Israel, and a just and comprehensive peace.

We seek true peace; not just a pause between more wars and intifadas, but a permanent reconciliation among the peoples of the Middle East.

In our meeting today we also discussed the future of Iraq. I reaffirmed America's commitment to helping the Iraqi people achieve freedom and democracy in a unified country, its borders intact; a country free of weapons of mass destruction, and at peace with its neighbors and the world.

America is fully committed to restoring security to Iraqi cities and helping the Iraqi people rebuild their nation, after decades of cruel and corrupt dictatorship. I welcome the support of all the nations represented here for these important goals, and hope they will contribute to helping the good people of Iraq.

There's a hopeful direction to recent events in the Middle East. In Iraq, a tyrant in support of terror has been removed. Reform is taking hold in many societies that are eager to join in the progress and prosperity of our times. I urge nations throughout the region open their markets, to seek broader trade in the world, and to join us in creating a U.S.-Middle East free trade area within a decade.

The leaders here today recognize the importance of representative, democratic institutions to fulfilling the hopes of the Iraqi and Palestinian people. And free institutions are critical to the hopes of people everywhere. Allowing peaceful avenues for the expression of different views and broader political participation will unleash the talents of each nation. All Middle East countries that travel this challenging path will have the support and the friendship of the United States.

In this meeting we've made progress on a broad agenda, and we're determined to keep moving forward. I thank all the leaders here today, and may God bless our important work.