For Immediate Release
Office of the Press Secretary
May 26, 2003

THE PRESIDENT: Thank you all very much for the warm welcome. Mr. Secretary, thank you for your leadership. Secretary Principi, members of the United States Congress, General Myers, members of the Joint Chiefs, General Jackson and Colonel Ray and Colonel Steedley, veterans, honored guests and my fellow Americans, we come to this Memorial Day with deep awareness of recent loss and recent courage. 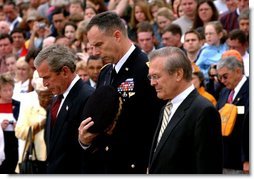 Beyond the Tomb of the Unknowns, in Section 60 of Arlington Cemetery, we have laid to rest Americans who fell in the battle of Iraq. One of the funerals was for Marine Second Lieutenant Frederick Pokorney Junior, of Jacksonville, North Carolina. His wife, Carolyn, received a folded flag. His two year old daughter, Taylor, knelt beside her mother at the casket to say a final goodbye.

An uncle later said of this fine lieutenant, "He was proud of what he was doing and proud of his family, a hard working guy -- the best guy you can ever know. I hope the American people don't forget." This nation does not forget.

Last month, in Section 60, First Lieutenant Rob Jenkins was buried, along with five other members of a bomber crew. They were lost when their plane was shot down over North Africa in 1942. Rob Jenkins had joined the Army Air Corps after Pearl Harbor, and he was 20 years old on his final mission.

Six decades later, his plane was found and the remains of the crew were carefully identified, returned home and buried with military honors. Rob's sister, Helen, said, "We were very proud that the government would care that much. After all, it was such a long time ago." This nation does not forget. (Applause.)

On Memorial Day, Americans place flags on military graves, walk past a wall of black granite in Washington, D.C., and many families think of a face and voice they miss so much. Today, we honor the men and women who have worn the nation's uniform and were last seen on duty. From the battles of Iraq and Afghanistan, to the conflicts in Korea and Vietnam, to the trials of World War, to the struggles that made us a nation, today we recall that liberty is always the achievement of courage.

And today we remember all who have died, all who are still missing and all who mourn. And on this day, especially, our nation is grateful to the brave and fallen defenders of freedom. In every generation of Americans we have found courage equal to the tasks of our country. The farms and small towns and city streets of this land have always produced free citizens who assume the discipline and duty of military life. And time after time, they have proven that the moral force of democracy is mightier than the will and cunning of any tyrant. 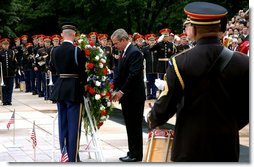 The widow of one of our Marines in Iraq made this point very simply. "There is good and evil in the world." she said, "That's what's going on. And he was the good." All the good people we honor today were willing to die in the service of our country and our cause. Yet all of them wanted to live. And the images they carried with them at the end were the people they loved and the familiar sights of home.

Not long before his death last month, Army Captain James Adamouski of Springfield, Virginia, wrote this to his wife Meighan. "I do my job 110 percent and don't get distracted or discouraged when I'm out flying on missions. However, when I have some down time and get to really thinking, I realize that for all the good times -- all the good things we're doing here, I just plain miss you."

In his last letter home from the Middle East, Staff Sergeant Lincoln Hollinsaid, of Malden. Illinois, said how much he appreciated getting mail from his family. He added, "I wish my truck and boat knew how to write." (Laughter.) "I sure do miss them." (Laughter.) He went on, "Today would be a beautiful fishing day. I can see it now: drop my electronic anchors, kick my feet up, three poles out with hooks in search for that elusive, yet loveable, catfish."

Americans like these did not fight for glory, but to fulfil a duty. They did not year to be heroes, they yearned to see mom and dad again and to hold their sweethearts and to watch their sons and daughters grow. They wanted the daily miracle of freedom in America, yet they gave all that up and gave life itself for the sake of others.

Their sacrifice was great, but not in vain. All Americans and every free nation on earth can trace their liberty to the white markers of places like Arlington National Cemetery. And may God keep us ever grateful. (Applause.)

Almost seven weeks ago, an Army Ranger, Captain Russell Rippetoe was laid to rest in Section 60. Captian Rippetoe's father, Joe, a retired Lieutenant Colonel, gave a farewell salute at the grave of his only son. Russell Rippetoe served with distinction in Operation Iraqi Freedom, earning both the Bronze Star and the Purple Heart.

On the back of his dog tag were engraved these words, from the book of Joshua, "Have not I commanded thee? Be strong and of good courage. Be not afraid, neither be thou dismayed, for the Lord thy God is with thee." This faithful Army captain has joined a noble company of service and sacrifice gathered row by row. These men and women were strong and courageous and not dismayed. And we pray they have found their peace in the arms of God. 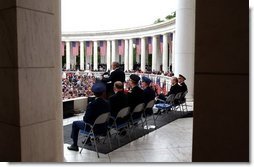