For Immediate Release
Office of the Press Secretary
May 22, 2003

THE PRESIDENT: Good morning. The Office of Management and Budget is one of the most important agencies in our government. This agency has a central responsibility for implementing the full range of this administration's agenda, from growing the economy and creating jobs, to ensuring a strong national defense and a secure homeland. I depend on the OMB director to keep a watchful eye on the taxpayer's money, to reform the operations of our government, to make them better managed, more accountable and driven by results. 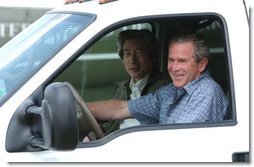 I also depend on the director to provide honest and thorough information on the state of our budget, and to offer sound advice as we carry out our national priorities. For this essential position, today I nominate one of my closest and most trusted advisors, Joshua Bolten.

For more than four years, first in Austin, and now in Washington, I have counted on Josh for his knowledge, his clear thinking and his sound judgment. From his work in the private sector and practice of law in the investment banking world, Josh has a broad perspective on commerce and international economy. From his experience in both the executive branch and on Capitol Hill, Josh Bolten understands the workings of the federal government as well as anybody in this city. And most important, from his tenure as my deputy chief of staff for policy, Josh knows the philosophy and priorities of my administration.

Josh Bolten is brilliant, he is tireless, he remains calm in any storm. He is a man of complete integrity. No member of my staff has served with greater skill or earned greater respect amongst his colleagues than Josh Bolten. I'm honored that he's agreed to join my Cabinet.

When confirmed by the Senate, Josh will take over from a superb public servant, Mitch Daniels. Mitch has watched over the budget with a sharp eye and the common sense of a strong executive. He's insisted on good management of the people's money. He's done his job with great energy and consistent good humor. I have a feeling that Mitch's days in the public service are not over. I want to thank Mitch for serving our country so very well.

And now I'm pleased to introduce my choice as the next Director of the Office of Management and Budget, Josh Bolten.

MR. BOLTEN: Mr. President, thank you. Thank you for your kind words and your confidence. If confirmed by the Senate, I'll be a tireless advocate for your agenda and a tight-fisted custodian of the people's money.

I'm especially honored to be considered to succeed Director Daniels, a good friend whom I admire. Among many strengths, Mitch has never forgotten that the M in OMB stands for management. Mitch has brought to the entire federal government your focus on accountability for results, and he's understood that the right question is not, how much can we spend? But, how well? Are we using the taxpayer's money wisely?

During the past two years, I've had the privilege of working closely not only with Mitch, but with every other member of your able Cabinet. I look forward to continuing a good working relationship with each of them and with the Congress in crafting budgets that best serve the American people.

I've been told, Mr. President, and not only by Mitch, that OMB Director is not the easiest job in government. But if confirmed, I will undertake this assignment with great confidence for two reasons in particular. First, OMB is blessed with many of the finest professionals in government, doing some of the toughest jobs in government. Second, we all serve under a strong leader who sets clear priorities.

Mr. President, this morning you reiterated the most important, winning the war on terror, protecting the homeland and strengthening our economy. I pledge to you an Office of Management and Budget that is dedicated daily to securing these priorities and all of your priorities and doing so as you just directed me, with a very watchful eye on the people's money.