For Immediate Release
Office of the Press Secretary
May 20, 2003

THE PRESIDENT: Thanks for coming, and good morning. I want to welcome you all to the White House. And I'm pleased all of you could be here to support the preservation of a great American treasure, our forests.

Nine months ago I stood at the scene of Squires Peak fire in Oregon. On one side of a dirt road, where small trees and underbrush had been removed before the fire rolled through, the forest was green and alive. On the other side of the road, where a similar thinning project had been stalled by lawsuits, the landscape was charred and the trees looked like matchsticks. The contrast between these two sides of the forest was startling, and it was tragic. 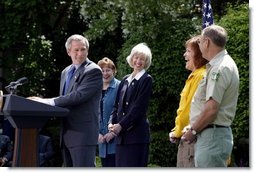 Active forest management could have saved both areas. It could have saved millions more acres across America from the devastation of severe forest fires and insect damage. Yet, for too many years, bureaucratic tangles and bad forest policy have prevented foresters from keeping our woodlands healthy and safe. The cost to America has been high, in the loss of lives and property, and in the destruction of woodlands and wildlife.

No region in America is immune to this problem. Wildfires, diseases and insect infestations threaten the habitat of animals and diminish the quality of our water. And problems on public lands hurt private lands, as well. After all, the problems can leap across boundary lines to destroy homes and farms and ranches and, in some cases, towns.

The Healthy Forests Initiative that I announced last summer is making American woodlands more safe, acre by acre. As we approach the start of fire season we have a responsibility to do even more to protect our forests, and we will meet that responsibility. People who understand the responsibility we assume when we take office are on the stage with me today, namely, Secretary Gale Norton and Secretary Ann Veneman. And I want to thank them for their leadership and I want to thank you for your work. (Applause.)

I appreciate Jim Connaughton, who's the Chairman of the Council on Environmental Quality. That means he works in the White House and helps coordinate policy out of the White House. Jimmy is doing a fine job. 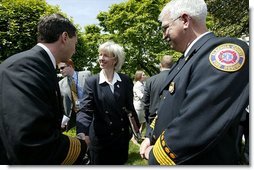 I also want to thank Rex Mann, who's the area commander for the U.S. Forest Service. Rex is a well-organized fellow. He's a smart man. He understands sensible policy. After all, he's made a career of trying to make sure sensible policy came into being to prevent devastation of our forests. I met Rex at the site of a tragic fire. I saw how well-organized he was, and I saw the fact that he commanded a group of great professionals, and those would be the U.S. Forest Service professionals. And so, Rex, thank you for coming. And I want to thank all the people who work for the U.S. Forest Service across our country. (Applause.)

We're lucky to have some governors, particularly out West, who understand practical, sensible policy, people that are working hard to help the world realize that not all the smarts exist in Washington, D.C., that there's plenty capable people outside of the Nation's Capital. And one such governor is with us, and that's Judy Martz, who's the chairperson of the Western Governors Association, the Governor of Montana. Thank you, Judy, for coming. (Applause.)

Plus, we've got some good people in the Congress who care about this issue, people who work in a bipartisan fashion to get the bill through. We've got members of the United States Senate who are here, strong leaders on this issue, starting with Senator Pete Domenici from the state of New Mexico, Gordon Smith from the state of Oregon, Larry Craig from the state of Idaho, and the birthday boy -- Senator Crapo, where are you? Congratulations, Mike, happy birthday. (Applause.)

I want to thank the members of the House. The House is going to take this bill up today, as I understand. I want to thank you all for working on this. Pombo, Goodlatte, McInnis, Walden of Oregon. Sherry Boehlert of New York has been a stalwart in bringing factions together on the floor of the House, and I want to thank you for that, Sherry, for your leadership. Gilchrest of Maryland, Taylor of North Carolina, Renzi of Arizona and Mike Ross of Arkansas, thank you all for coming. I'm proud you all are here. (Applause.)

Last year 23 firefighters died while battling disastrous forest fires. Our professional firefighters take risk. We need to mitigate those risks by sound policy. We need to be smart about how we manage our forests. Those fires last year scorched 7 million acres, more than double the average of the last 10 years. Major blazes burned in 15 states across our country, destroyed 815 homes. It cost the taxpayers about $1.6 billion of fire suppression. The economic impact of these wildfires and of mismanaged forests is widespread. Hardworking Americans and the communities that count on healthy forests are suffering.

Since 1989, five Western states -- Oregon, Washington, Idaho, Montana, and California -- have lost 47,000 timber jobs. Four hundred mills have closed in those states. At present, this year's fire outlook seems less severe -- and that's good news for the men and women who wear the yellow. Yet, the danger persists and many of our forests are facing a higher than normal risk of costly and catastrophic fires. The communities from Georgia to California that are at significant risk for those fires need our help. And today we pledge it, we pledge our help. (Applause.)

Wildfires in unnaturally overgrown forest burn hotter and spread faster than normal fires. And their effects on the environment can be devastating. The fires sterilize soils and trigger soil erosion. They decimate our forests, killing even giant Sequoias that have survived centuries of smaller fires. They destroyed habitats of endangered species. Last year, the fire in Hayman, Colorado damaged the habitat of several species, for example, including the Mexican spotted owl.

One reason for these deadly fires is found in decades of well-intentioned, but misguided, forest policy which has allowed dangerous undergrowth to build up on the forest floor. During seasonal droughts, these small trees and underbrush act as ladders for fires to reach to the tops of our oldest and tallest trees. They make forest vulnerable to insect infestation and disease.

Sound science shows that we can prevent such fires by managing forests with controlled fire, cleaning out the underbrush and thinning the areas that are vulnerable to intense fires and insect attacks. This is common sense. And it is the consensus of scientists, wildlife biologists, forestry professionals and firefighters -- the very people who have dedicated their lives to keeping our forests healthy and our community safe.

This is policy that came from the grassroots to the White House. We've asked experts on how best to deal with the problem. See, we see a problem, and we want to deal with it for the good of the country.

Andrea Gilham is a fire management officer and a member of the Blackfeet tribe in Browning, Montana. She has been fighting fires since she was 19 years old, two years ago. (Laughter.) She has a degree in Forest Resource Management. She's the kind of person that Congress needs to listen to. She knows the cost of doing too little to prevent extreme wildfires. In 1990, she was working the front lines of the Dude fire in Arizona's Tonto National Forest, on the day six firefighters died. Andrea says, "Everybody knows what we need to do. The longer we wait, the more likelihood a catastrophic wildfire is going to happen. Lives and property are at risk."

And the initiative I've laid out is beginning to make sense. We've begun to cut through the bureaucratic red tape -- and there's a lot of red tape here, as the people on the front line can tell you. Since 2000, the federal government has more than doubled the amount of money budgeted for firefighting -- and that is good -- for firefighting and fire prevention. For '04, we budgeted an 8 percent increase. And I want to thank the members of the Congress and the Senate who are working with us on that project, to make sure we've got enough money to let these good folks do what they're supposed to do, on behalf of communities all across the country.

This year, we've reduced the undergrowth that fuels fires on more than 1.3 million acres of forest and rangelands. That was nearly twice as many as were treated in the year 2001. We're moving at a record pace. We've still got a long way to go. There's a lot more work to do. One-hundred-and-ninety-five million acres are vulnerable to devastating forest fires. For the sake of our forests and for the sake the communities, we've got to act quickly. And that's why we've gathered here.

I appreciate the Congress' hard work on the Healthy Forests Restoration Act. I appreciate the House moving the bill today. I urge Congress to get it done, to get it to my desk as quickly as possible. The bipartisan bill -- and I emphasize, bipartisan bill -- builds on the success of the Healthy Forests Initiative. It sets the goal of thinning trees and cleaning out underbrush, and restoring the health to 20 million acres. I hope Congress says when we're successful in the 20 million, we need to get after the 175 million more acres. (Applause.)

This bill sets priorities for forest management by authorizing work in the areas that are closest to rural communities, and work where there's the greatest risk for environmental damage. It's a practical piece of legislation. It's good, common-sense environmental policy is what we're talking about.

The Healthy Forest Restoration Act helps the people closest to the problem by allowing local citizens to help plan projects for nonprofit, for profit, and for stewardship groups. And these citizens can benefit economically from selling the smaller trees that are cleared out from the forests.

Local citizens can be great allies in the effort to protect our forests. Ron Bell is with us today -- where are you, Ron? There he is; hi, Ron -- thought you would have gotten a better seat. (Laughter.) He spent 22 years in the army, before coming home to manage his family cattle and tree farm near Batesville, Arkansas. About six years ago, when Ron noticed the health of the forest in his area deteriorating from insect infestation, he decided to do something about it. Ron, his wife and their two sons spent an entire winter cleaning out the diseased and lower-quality trees that were crowding out the taller trees in his 40-acre forest.

When he was finished, the forest was healthier, the bugs were gone. And he had made about $15,000 from the sale of the undergrowth that he cleared away. Today he belongs to a group of nearly 200 landowners in Central Arkansas who are working to manage their woodlands and to keep the bugs out. Ron says some of the landowners who live near national forest areas are worried because the government moves too slowly in treating our own forests. Here's what he says. "The conditions are preventable with a little bit of management. You don't just have to throw up your hands. There are times you need to get in their quickly, when the situation is dire."

And the reason why that is necessary is because our forests are a treasure, and we are their stewards. We must preserve them. We must protect the people and communities who depend on them. We must fulfill our promise to the next generation, that's what we must do, and leave behind a world as blessed and as beautiful as the one our parents left us.

Thank you for your interest in this important subject. May God bless your work, and may God continue to bless the United States of America. Thank you. (Applause.)