For Immediate Release
Office of the Press Secretary
May 19, 2003

PRESIDENT BUSH: Madam President, Attorney Arroyo, members of the Philippine delegation, members of Congress, and distinguished guests: On behalf of the American people, Laura and I welcome you to the United States.

This is the first state visit by the leader of an Asian country during my administration. You honor the American people with your visit, because our two nations share special ties of history and friendship and family. And we share a commitment to the defense of democracy and the advance of freedom. 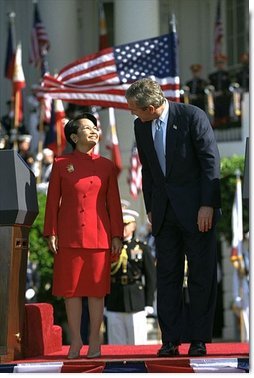 Just over a century ago, Americans and Filipinos worked side by side to liberate the Philippines. Nearly half a century later, in a world war, our soldiers fought and died together in places like Bataan and Corregidor. And on this foundation of common sacrifice, America and the Philippines built an alliance that remains strong, an alliance that is essential to the peace of the Pacific.

In this new century, both our nations are threatened by terrorism, and we are determined to fight that threat until it is defeated. Our diplomats, and law enforcement and intelligence officers are working arm-in-arm to disrupt terror plots, to cut off terrorist financing, and to bring the terrorists to justice.

President Arroyo has welcomed American troops to train and advise their Philippine counterparts in Philippine-led antiterror operations. And she has been a leader in building broader cooperation against terror throughout the Asian Pacific region.

Madam President, for all you have done to make our world safer, America thanks you. (Applause.)

Last week's terrorist attacks in Saudi Arabia that killed innocent civilians from the United States, the Philippines, and many other nations, remind us that the war on terror continues. The world's free nations have the courage and the determination to fight this war. And together, we will defeat the forces of global terror.

President Arroyo also recognizes the threat posed by weapons of mass destruction. And she spoke with strength and conviction of the need to disarm the Iraqi dictator and to liberate the Iraqi people. Now the Philippines is helping Iraq take its place among free nations by sending military police and medical personnel. The President and I both recognize that a free and secure Iraq is good for the Philippines, is good for America, and is good for the world.

We share great goals in the world. We are committed to opening markets in Asia and around the world to bring more people into an expanding circle of development and prosperity. And we are committed to adding the moral and material resources of our countries to the global fight against poverty and hunger and disease.

The partnership between our nations is sustained by the friendship between our peoples. More than 2 million Americans trace their ancestry back to the Philippines, and they enrich our national life. Many Filipino Americans serve in our military, and I'm proud to recognize one of them today. Army Lieutenant General Edward Soriano is one of the highest-ranking Filipino Americans in the history of America's military. (Applause.) He brings pride to both our countries, and we honor his service in the cause of freedom. 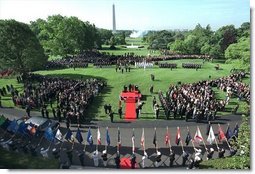 The Philippines was the first democracy in Asia and has a proud tradition of democratic values, love of family and faith in God. President Arroyo, you are carrying this tradition forward, and I'm proud to call you friend. (Applause.) Today the First Lady and I are honored to welcome you and Attorney Arroyo to America and to the White House. Mabuhay! (Applause.)

PRESIDENT ARROYO: Thank you very much. President Bush, Mrs. Bush, Vice President Cheney, Mrs. Cheney, Secretary Powell, Mrs. Powell, Secretary Rumsfeld, General Myers, officials of the U.S. government, excellencies of the diplomatic corps, ladies and gentlemen. Thank you, President Bush, for inviting me to this state visit. It only confirms that relations between our two countries are deeper and warmer today than they have been in a very long time. (Applause.)

Today our two countries have a revitalized and maturing alliance, rooted in shared history, shared values, a common interest in global peace and prosperity, and a real commitment to combating terrorism and advancing freedom.

Our alliance abides strong as ever, even as the world today requires a new perspective on political and economic security in Asia Pacific. This new perspective must recognize that while Asia must take greater responsibility for its own political and economic security, it must also recognize that strong relations with the U.S. will contribute greatly to regional peace and prosperity, stability and security, especially from terrorism. (Applause.)

Thus we, your friends, must find a way to support continued and active engagement with the U.S. at a time when there are some forces in my region working against such a relationship. Although wisdom counsels commitment, in the face of terror the temptation to disengage is strong. We must fight that temptation, because the answer to fear is confrontation. Indeed, we must close ranks and stand firm against terrorist threats, however grave, however armed, and from whatever quarter. (Applause.) 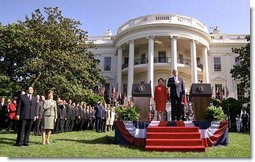 To spare themselves, some countries might prefer an accommodation with terrorism. The Philippines has chosen to fight terrorism. (Applause.) We compensate for such modest means as we command with an unshakable resolve to defeat terrorism once and for all, and with faith in the justice of our cause and our friendship with the United States.

Our war on terrorism has made significant gains, but the threat is far from over. The war is not yet won. But it will be won, there can be no doubt. How long and at what cost are the only things in doubt. As the terrorist attack in Riyadh, which took both Filipino and American lives, shows, for the Philippines, the new perspective on economic and political security in Asia Pacific must take into account the over seven million of our men and women who, in seeking a better life abroad, contribute greatly to the development of economies around the world, not least that of the United States.

I also take pride in the robust economic and trade ties that bind the Philippines and the United States. The Philippines is pursuing long-needed economic reforms. The current and continuing reforms will strengthen the Philippine republic. They will make easier Philippine and American economic cooperation, and they will promote the cost of fighting world poverty.

I appreciate the help of President Bush in our work to alleviate poverty and other socio-economic ills from which terrorism draws its strength. Like the fear on which it feeds, terrorism can be contagious, and it will not be contained unless we agree on a comprehensive approach for defeating it in Southeast Asia.

And so, in looking forward to discussing that comprehensive approach, I look forward to my talks with President Bush and his officials in this administration. And I hope President Bush reciprocates this visit by accepting a state visit to the Philippines towards the end of this year. Thank you. (Applause.)