For Immediate Release
Office of the Press Secretary
May 17, 2003

THE PRESIDENT: Good morning. May 17th is Armed Forces Day, when America honors the men and women who serve in every branch of the service. Here in the Oval Office, I'm joined by some distinguished Americans, eight members of the military who fought bravely during the battle of Iraq. All of them were wounded in battle and are recovering from their injuries. All of them have earned the respect and the gratitude of our nation. 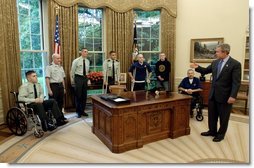 Americans are proud of every man and woman who has faced the risks of war in the cause of freedom. Many still face dangerous duty in Iraq and Afghanistan as they provide order and stability in liberated countries. Many are fighting on other fronts in the war against terror, and some brave Americans have given their lives to protect our country and to keep the peace. Our whole nation honors their memory, and our thoughts and prayers are with the loved ones they left behind.

The world has seen the tremendous capabilities of the United States military. With fine allies at their side, American soldiers and sailors, airmen, and Marines used advanced technology to gain historic victories in Iraq and Afghanistan. Unmanned Predator aircraft carried out bombing missions deep behind enemy lines, keeping more of our pilots out of harm's way. Satellites high above the Earth, at any time of day or night, provided detailed images of individual targets and whole battlefields. At least two-thirds of the bombs used by coalition forces in Iraq were precision-guided by lasers or global-positioning satellites, compared with just 13 percent of the bombs we used in the 1991 Gulf War.

For all the contributions of technology, however, the battles of Iraq and Afghanistan were won by the skill and courage of well-trained, highly motivated men and women. In the recent fighting, Marines and soldiers charged to Baghdad across 350 miles of hostile ground in one of the swiftest advances of heavy arms in history. Pilots flew through blinding sandstorms, soldiers and Marines ran into the fact of gunfire, at times ignoring their own injuries to save wounded comrades. Special Operations forces conducted daring raids to seize airfields and missile launch sites. Every branch of the service worked in united purpose, and displayed the highest standards of professionalism and honor.

With the liberation of Iraq and Afghanistan, we have removed allies of al Qaeda, cut off sources of terrorist funding, and made certain that no terrorist network will gain weapons of mass destruction from Saddam Hussein's regime.

These two battles were important victories in the larger war on terror. Yet the terrorist attacks this week in Saudi Arabia, which killed innocent civilians from more than half a dozen countries, including our own, provide a stark reminder that the war on terror continues.

The enemies of freedom are not idle, and neither are we. Our government is taking unprecedented measures to defend the homeland. And from Pakistan to the Philippines, to the Horn of Africa, we are hunting down al Qaeda killers. So far, nearly one-half of al Qaeda's senior operatives have been captured or killed. And we will remain on the hunt until they are all brought to justice.

This nation accepts the responsibilities of keeping the peace. And the best way to keep the peace is to make sure that our military remains second to none. On this Armed Forces Day, we are grateful to all who serve and sacrifice as members of the United States Army, Navy, Coast Guard, Air Force, and Marines.