For Immediate Release
Office of the Press Secretary
May 16, 2003

THE PRESIDENT: We had a good day yesterday in the United States Senate as the Senate passed a bill that will make it more likely people looking for work will find a job. I'm pleased with the progress. I look forward to working with House and Senate leadership to reconcile any differences they have and get a bill to my desk as soon as possible. I'm optimistic about our economy and its future. I'm even more optimistic now that the Senate has acted. 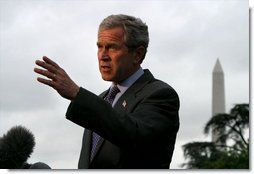 I'm also so pleased that the Senate passed a bill to help ease the suffering on the African continent, as well as in some Caribbean nations. We've got a HIV-AIDS initiative that will help -- say to the world that the United States is a compassionate country, we care deeply about the suffering that takes place in the world.

Again, I want to thank the Senate for -- as well as the House -- for passing a good piece of legislation. It looks like that bill can get done pretty quickly and I'll be able to sign it and take it to Europe with me as a symbol of the great depth of compassion that our country holds for those who suffer.

Q Mr. President, can you live with a tax cut like the one the Senate passed that goes away after three years?

Q Mr. President, in terms of combating terrorism at home, do you think the Saudis have gotten the message this time around?

THE PRESIDENT: Well, Saudi Arabia is our friend, John, and we're working closely with them to track down the killers of American citizens and British citizens and citizens from Saudi Arabia, as well as other countries.

The best way to defend the homeland, the best way to secure the future of the American people is to find the killers before they strike us. And that's exactly what we're doing now inside of Saudi Arabia.

Obviously, we mourn the loss of life. It is a -- it is certainly a wake-up call to many that the war on terror continues, that we've still got a big task to protect the American people and others who love freedom from the designs of -- and the will of these purveyors of hate. And we'll find them. We'll bring them to justice.

Q But, sir, is the message coming from this administration to the Saudis that you've got a problem, you have to deal with it --

THE PRESIDENT: The message --

THE PRESIDENT: How are you?

Q Mr. President, you filed with the FEC today. How does it feel to be a candidate? And how do you assess your chances?

THE PRESIDENT: The American people will decide whether or not I deserve a second term. In the meantime, I am focusing my attention today on finding -- helping people find work. And that's where I'm going to be for a while. I want this economy to be robust and strong so that our fellow Americans who are looking for a job can find a job.

We've also got a lot of work to do on the security front. As John clearly pointed out, we've got an issue -- we're dealing with countries from around the world to make sure that they know that the war on terror continues. No one should be complacent in the 21st century, the early stages of the 21st century, so long as al Qaeda moves. I've told the country that we've brought to justice about half of the al Qaeda network -- operatives, key operatives. And so the other half still lives. And we'll find them, one at a time.

Listen, have a great weekend. Thank you, all.

You're looking good, John, from the war zone.

Q Thank you, sir. I call it the Iraq-kins Diet. (Laughter.)