For Immediate Release
Office of the Press Secretary
May 15, 2003

THE PRESIDENT: Thank you all very much for that warm welcome, and thank you for the privilege of joining you all for this memorial service.

Today Americans join in tribute to a great profession, and remember good men and women who have fallen in the line of duty. We recall their stories. We offer our heartfelt sympathy to their families and their colleagues. And we honor their distinguished service to the cause of justice and peace. 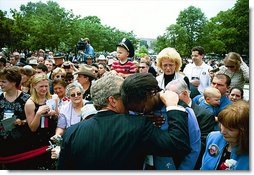 He also replaced a good man, a man that I could call friend, in Steve Young. I know Denise and his son Steven are with us today, and our prayers are with you, Denise and Steven, as you continue to cope with the life without your good husband and good dad.

I appreciate so very much members of my Cabinet being here today: John Ashcroft stands strong for law and order in our country. (Applause.) I'm honored that Gale Norton and Elaine Chao will join us, as well. The Director of the FBI, Bob Mueller, is doing a fantastic job in converting the FBI into a agency which is going to be on the front line of making sure terrorists do not harm our American citizens. And I appreciate your leadership, Director Mueller. (Applause.)

I want to thank all the law enforcement officers who have come here today to honor the fallen. But I want to thank you, as well, for what you do every day to make sure our country is a secure country. I particularly want to say to the families, there is a lot of love and compassion in this nation of ours. A lot of people pray for you. And my hope is that their prayers will give you the strength necessary to move on.

This year, 377 names are added to the National Law Enforcement Memorial, including 148 who were killed in the line of duty in 2002. The death of a peace officer is a reminder that peace can be fragile and safety will always need defenders. Law enforcement officers know that evil is real, and evil has servants of its own -- criminals and terrorists who live by violence and make victims of the innocent. 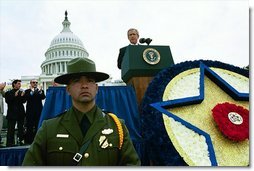 And law enforcement officers know that evil must always be opposed. Justice and order and safety in every time are the achievements of bravery. More than 700,000 of our fellow Americans show that bravery as sworn officers of the law. And this nation is grateful to your service. (Applause.)

The risks of law enforcement come in difficult assignments, and even in routine calls. Officers train and prepare for many threats, yet preparation will never take the danger away from a hard profession. Mary Ann Collura, an 18-year vet from the Fair Lawn, New Jersey Police Department, was killed while confronting an armed man after a high-speed chase. A fellow officer later said, "You know, there are probably a hundred cops like this who did everything right and still have their names on the wall. You put your faith in the hands of God every day when you go out there."

For an officer's loved ones, daily life is also an act of faith. Family members share the uncertainties and worries of service. America recognizes and honors the sacrifice of our law enforcement families. We thank you for your service to our country, as well. And every May 15th, we think especially of those who have received the sudden and terrible news, many of whom are here today. Your sadness and loss are deep, and so is your pride. Long before tragedy came, you knew this person you loved was brave and good. And your country knows it, too.

Last October, Virginia State Trooper C. Mark Cosslett was killed while racing to a scene. He had spent the morning at a pre-school, comforting children who were frightened by the sniper attacks here in Washington, in the Washington area. One of the parents later said, "I never Mark Cosslett and wouldn't have known his name but for his fatal accident. I do know one thing -- and I knew it before he was gone -- at a time when my family was looking for a hero, there he was."

In times of challenge and uncertainty, we see more clearly who has really earned our admiration. At a memorial service for Chicago Patrolman Benjamin Perez, the police chaplain said this: "Heroes are not found on basketball courts or in rock bands; they're found on the backs of engines and the front seats of squad cars." (Applause.)

Over the past 20 months, Americans have rediscovered how much we owe the men and women who repeat an oath and carry a badge. They have not only taken a job, they have accepted a mission. When they are called for help, they answer it. You see danger, they will confront it. All of us rely, every day, on their high standards of conduct, their skill and your sense of duty. 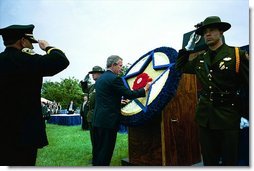 In the spring of last year, Sheriff's Deputy David March, of Los Angeles County, pulled over a stolen car, and was shot and killed by the driver. His colleagues remember him as a good street cop. It's one of the most perilous and essential jobs in America. His boss, Sheriff Lee Baca, said, "an honest man who had no fear, a man of faith who believed in others." About a week before his death, Deputy March sent an email to his station commander, and here's what he said. "My goals are simple. I will always be painfully honest, work as hard as I can, learn as much as I can, and make a difference in people's lives."

These are the values we expect of every sworn law enforcement officer -- honesty and hard work and devoted service. These are the values Americans see every day in the officers of law who patrol the streets and highways, investigate crimes and arrest the accused. And every time such a man or woman is taken from us, our nation has lost one of its finest citizens, a community has lost a friend and protector, and a family has lost an example of character and courage who they will love and respect forever.

Today in their memory, the flag of the United States of America flies at half-staff. We pray God's blessings on those who grieve. Our nation honors each name. We are grateful for each life.

May God bless you all, and may God continue to bless the United States of America. (Applause.) 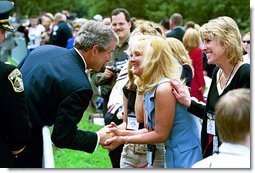