For Immediate Release
Office of the Press Secretary
May 6, 2003

THE PRESIDENT: Thank you, good afternoon, and welcome to the White House. I'm honored to host Prime Minister Goh as we sign an historic free trade agreement between the United States and Singapore.

Our two countries have a proud history of friendship and cooperation. We're working together to meet the threats of a new era, and we share a belief in the power of free enterprise and free trade to improve lives. The U.S.-Singapore Free Trade Agreement marks a crucial step forward for both our countries. And with the approval of the Congress, this agreement will help generate well-paying jobs and opportunities for people in Singapore and in the United States. 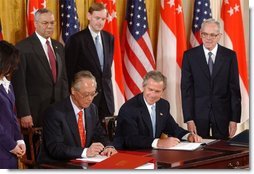 The Prime Minister is a man with whom I enjoy good conversations. He's got good advice, and I'm proud to call him "friend."

I'm so grateful for the members of Congress for being here. Thank you all for coming; strong free traders, people who believe in the possibility of trade, in the hope of trade. I want to thank members of our business community who are here. Mr. Prime Minister, you've drawn quite a crowd. (Laughter.)

America supports free trade because it creates new opportunities for millions of people, new wealth for entire nations, and benefits that are widely shared. NAFTA, in the Uruguay Round, for example, show us what free trade can accomplish. They've created more choices and lower prices for consumers, raising living standards for a typical American family of four by at least $2,000 a year. Free trade has a direct benefit for our citizens.

And that's why this administration strongly stands for free trade. From the first days of this administration, we have been working to extend the benefits of trade to every region of the world. We're a leader in the negotiations of the WTO. We've advanced bold proposals to open up global markets. We seek to build on the success of NAFTA with the Free Trade Area of the Americas.

We're also encouraging the free flow of trade and investment in the Pacific, among our partners in APEC and ASEAN. America has implemented a free trade agreement with Jordan, our first ever with an Arab nation. And we're finalizing our pact with Chile. Similar negotiations are underway with Australia, Morocco, and five nations in the Central American region. And soon we'll beginning negotiations with the Southern African Customs Union to bring new opportunities to a part of the world where the need is great.

The agreement that the Prime Minister and I sign today is the first of its kind between the United States and an Asian Pacific country. The 4 million people of Singapore have built a strong and vibrant economy. Singapore has long set an example for its neighbors in the world of the transforming power of economic freedom and open markets. Singapore is already America's 12th largest trading partner, and buys a full range of American products, everything from machine parts and computers to agricultural products.

This free trade agreement will increase access to Singapore's dynamic markets for American exporters, service providers and investors. The agreement contains state of the art protections for Internet commerce and intellectual property that will help drive growth and innovation in our dynamic technology sectors.

The agreement also safeguards the right of workers and protections for our environment. It's a modern agreement. And it's a good agreement for both countries. By granting free trade -- by granting trade promotion authority last year, Congress showed support for an agenda of free and open trade. And I want to thank them for that. I hope the Congress will act in this same spirit and quickly give final approval to this agreement -- and I'm sure they will. Singapore is a nation that is small in size, but large in influence. With this agreement, Singapore becomes an even more valued economic partner of the United States.

Mr. Prime Minister, your nation has also been a vital and steadfast friend in the fight against global terror. Singapore has made determined and successful efforts to break up terror plots before they can take innocent lives.

As a member of the U.N. Security Council, Singapore worked hard to secure the passage of Resolution 1441, requiring Iraq to live up to its international obligations. And now with Iraq's liberation, Singapore will send police and health care workers to help with Iraq's reconstruction.

Mr. Prime Minister, I appreciate your nation's contribution as we overcome great dangers and defend the peace. I'm grateful, as well, for your commitment to a world that trades in freedom and for all the hard work on both sides that have made this agreement possible. We take great pride in the strong relationship between our countries.

I am delighted to join President Bush to sign the U.S.-Singapore Free Trade Agreement, or FTA. We launched negotiations during the APEC economic leaders meeting in Brunei two years ago. The reasons were both economic and strategic. The FTA would enhance our close economic relations, it would also signal the U.S. long-term commitment to engage Southeast Asia and contribute to its development. These reasons are even more valid today.

In particular, defeating terrorism in Southeast Asia requires American leadership. President Bush's resolute stand on this issue has given courage and heart to our people, especially the victims and intended victims of terrorism. The world must not be intimidated by terrorists. We must not allow them to derail our development. Southeast Asia supports the U.S. in the fight against terrorism. Indeed, since the Second World War, no country has played as important a role in Southeast Asia as America. You shed blood defending freedom in Korea and Vietnam. Your sacrifice bought the non-communist countries of Southeast Asia precious time and protective cover to consolidate our new nations.

In the last three decades, the U.S. has continued to work closely with ASEAN on security issues. You have also generously opened your markets, shared technology, and invested capital in our economies at crucial times in our development. America's presence has helped to shape contemporary Southeast Asia. Without the U.S., ASEAN would not have prospered as quickly as we did.

Over the years, exchanges of goods, services, investments, people, ideas and technology between Singapore and America have strengthened. The U.S.-Singapore FTA builds upon this solid foundation for growing economic links. Today, we have one of the closest trans-Pacific relationships. Our relationship is multi-dimensional in defense, as well as economics, with a shared strategic vision. We are a small country, with about the same population as Rhode Island -- 4 million. But Singapore is the 12th largest trading partner and the second largest investor from Asia. And the U.S. has consistently been Singapore's most important trading and investment partner.

The U.S.-Singapore FTA is an ambitious and comprehensive agreement. It removes barriers in the goods and services trade and in investments. It breaks new ground in emerging areas like e-commerce. It also establishes high standards in intellectual property, transparency and customs. The FTA will expand opportunities for American businesses in Singapore. More importantly, the U.S.-Singapore FTA can be a model for other FTAs under President Bush's Enterprise for ASEAN Initiative, or EAI. I hope the EAI will quickly result in more FTAs between the U.S. and Southeast Asia.

In short, Singapore appreciates your friendship. Our strong relations are based on shared interests in many areas: we now fight terrorism; we have good defense links; we both strongly advocate open trade and investment, and a multilateral trading system.

There are many people to thank for this historic agreement, the first between a country in Asia and the U.S. The chief negotiators Ralph Ives and Tommy Koh, and their teams; USTR Bob Zoellick, and Minister George Yeo; and the business community, especially the U.S.-Singapore Business Coalition, led by Boeing, Exxon-Mobile, and United Parcel Services, the U.S. ASEAN Business Council, and the U.S. Chamber of Commerce, and its local chapter in Singapore.

I thank also the Singapore congress -- congressional caucus, led by Congressman Solomon Ortiz, Congressman Kurt Weldon, the Ways and Means Committee, and the Senate Finance Committee. Some of them are here today.

Finally, I must thank you, President Bush, most warmly for your friendship to Singapore and to me, and for the vision and your leadership. Without President Bush, our FTA would not have come to such an expeditious and successful conclusion. I look forward to even closer relations between our two countries under the FTA. Thank you. (Applause.)