For Immediate Release
Office of the Press Secretary
May 1, 2003

Statement by the President


Priscilla Owen is an extraordinarily well-qualified nominee to the U.S. Court of Appeals. She has served with distinction on the Texas Supreme Court since 1995, and has strong bipartisan support including from three former Democrat Texas Supreme Court Justices with whom she served. She was unanimously rated "well-qualified" by the American Bar Association. 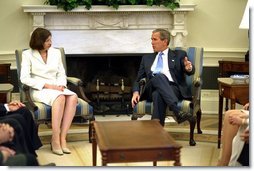 Justice Owen has been waiting nearly two years for an up or down vote in the United States Senate. The decision today by 44 Senators to filibuster and block a vote on her nomination is shameful. This obstructionist tactic is an injustice and unfair to this good woman and unfaithful to the Senate's own obligations.

Senate Democrats are now simultaneously filibustering two well-qualified nominees to the U.S. Courts of Appeals. The Senate has a Constitutional responsibility to exercise its advice and consent function and hold up or down votes on all judicial nominees within a reasonable time after nomination. Some Senate Democrats who once insisted that every appeals court nominee deserves a timely vote have now abandoned that responsibility in favor of partisan obstructionist tactics.

In October of last year, I announced my plan for timely consideration of judicial nominees. Today, I again call on the Senate to end the delays and to ensure that every judicial nominee receives an up or down vote, no matter who is President or which party controls the Senate. Let each Senator vote as he or she thinks best, but give the nominees a vote.