For Immediate Release
Office of the Press Secretary
March 25, 2003

THE PRESIDENT: Thank you all. Please be seated. Well, good morning. Thanks for coming. I've just met with our leaders here at the Pentagon, who are monitoring the course of our battle to free Iraq and rid that country of weapons of mass destruction. Our coalition is on a steady advance. We're making good progress. 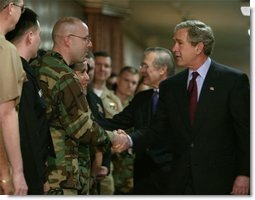 We're fighting an enemy that knows no rules of law, that will wear civilian uniforms, that is willing to kill in order to continue the reign of fear of Saddam Hussein. But we're fighting with bravery and courage.

The people of our military and their families are showing great courage, and some have suffered great loss. America is grateful to all those who have sacrificed in our cause.

Our coalition is strong. It's bound together by the principle of protecting not only this nation, but all nations from a brutal regime that is armed with weapons that could kill thousands of innocent people. America has more than 200,000 men and women engaged in Operation Iraqi Freedom.

Our troops also continue to fight bravely in other fronts of this war on terror. In Afghanistan last week, coalition forces launched Operation Valiant Strike against terrorists and their allies in the southern mountains of Afghanistan. Of course, we have troops standing watch in other parts of the world to protect and maintain the peace. All the members of the military, abroad, at home, or here in this important building, are bound together by a great cause, to defend the American people and advance the universal hope of freedom.

America has accepted this responsibility. We also accept the cost of supporting our military and the missions we give it. Today, I'm sending the Congress a wartime supplemental appropriations request of $74.7 billion, to fund needs directly arising from the Iraqi conflict and our global war against terror. My request to Congress will pay for the massive task of transporting a fully-equipped military force, both active duty and reserve, to a region halfway around the world.

This money will cover the current cost of fueling our ships and aircraft and tanks, and of airlifting tons of supplies into the theater of operations. The supplemental will also allow us to replace the high-tech munitions we are now directing against Saddam Hussein's regime.

My request includes funds for relief and reconstruction in a free Iraq. This nation and our coalition partners are committed to making sure that the Iraqi citizens who have suffered under a brutal tyrant have got the food and medicine needed as soon as possible.

Tommy Franks briefed us this morning about coalition efforts to demine the harbors -- the harbor -- to make sure that our humanitarian relief can be delivered safely to the Iraqi people. Coalition forces are working hard to make sure that when the food and medicine begins to move, it does so in a safe way. And soon, the Iraqi people will see the great compassion of not only the United States, but other nations around the world who care deeply about the human condition inside that country. 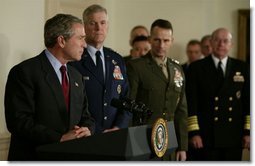 Our campaign in Iraq involves assistance of coalition partners and friends in the Middle East. The funding request to Congress will help reduce the economic burdens these countries have experienced in supporting our efforts. Also included are funds essential to waging, and helping our partners wage, the broader war on terror, which continues in Afghanistan, in the Philippines, and elsewhere.

We continue to fight the war on terror by protecting our homeland. At the federal level, I'm requesting more resources for the Departments of Justice and Homeland Security, to deal with this period of uncertainty. We'll provide resources for patrolling and safeguarding our borders; funds to help the FBI investigate domestic threats in this time of war; additional funding for the Coast Guard for port security in the United States and in the Middle East.

In this time of heightened security, we are expecting states and communities to take on greater responsibilities to protect critical infrastructure. And so I'm seeking additional resources to help states and cities make these preparations for the protection of our citizens.

Yesterday I informed the leaders of Congress of these spending requests. The situation in any war is fluid. I reminded them of that fact, and so I'm asking Congress for flexibility in how these funds can be allocated. They heard that message. They also heard the message that the need is urgent. The wartime supplemental is directly related to winning this war, and to securing the peace that will follow this war. I ask Congress to act quickly and responsibly.

One thing is for certain: Business as usual on Capitol Hill can't go on during this time of war. And by that I mean the supplemental should not be viewed as an opportunity to add spending that is unrelated, unwise, and unnecessary. Every dollar we spend must serve the interests of our nation, and the interests of our nation in this supplemental is to win this war and to be able to keep the peace.

Eighteen months ago, this building came under attack. From that day to this, we have been engaged in a new kind of war -- and we are winning. We will not leave our future to be decided by terrorist groups or terrorist regimes. At every turn in this conflict, Americans can be confident in the people who wear our nation's uniform. We support them. We are thankful for their service in places of great danger, in this hour of great need.