For Immediate Release
Office of the Press Secretary
March 21, 2003

THE PRESIDENT: I've asked the members of Congress to come up so that members of my administration can keep the leadership up-to-date as the war to liberate Iraq and to remove weapons of mass destruction out of Iraq proceeds. The military briefings, of course, will continue to be given out of the Pentagon. Secretary Rumsfeld will be briefing this afternoon. 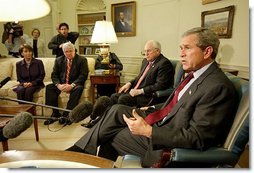 I also really want to thank members of Congress, both House members, Senate members, members of both political parties, for the strong resolutions that came off the floor of their respective bodies, resolutions which said loud and clear, our country supports the men and women in uniform. Not only do we support those brave souls who are sacrificing on our behalf, but we want to thank their parents and their families for their dedication, as well.

As Secretary Rumsfeld said, we're making progress. We will stay on task until we've achieved our objective, which is to rid Iraq of weapons of mass destruction, and free the Iraqi people so they can live in a society that is hopeful and democratic and at peace in its neighborhood.

All of us involved here in Washington are extremely proud of the skill and bravery of our young Americans who are willing to sacrifice for something greater than themselves.

So it's my honor to welcome the members here. We will continue to keep them briefed as this war progresses. And I want to thank them for the unity, the message of unity. Thank you all for coming.

THE PRESIDENT: Secretary Rumsfeld will be briefing today.

Q Do you want to give us any details, as the Commander-in-Chief, of how things are going?

THE PRESIDENT: Secretary Rumsfeld will be briefing today.