For Immediate Release
Office of the Press Secretary
March 17, 2003

THE PRESIDENT: My fellow citizens, events in Iraq have now reached the final days of decision. For more than a decade, the United States and other nations have pursued patient and honorable efforts to disarm the Iraqi regime without war. That regime pledged to reveal and destroy all its weapons of mass destruction as a condition for ending the Persian Gulf War in 1991.

Since then, the world has engaged in 12 years of diplomacy. We have passed more than a dozen resolutions in the United Nations Security Council. We have sent hundreds of weapons inspectors to oversee the disarmament of Iraq. Our good faith has not been returned. 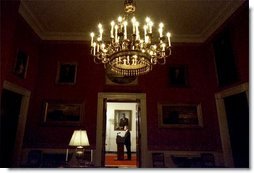 The Iraqi regime has used diplomacy as a ploy to gain time and advantage. It has uniformly defied Security Council resolutions demanding full disarmament. Over the years, U.N. weapon inspectors have been threatened by Iraqi officials, electronically bugged, and systematically deceived. Peaceful efforts to disarm the Iraqi regime have failed again and again -- because we are not dealing with peaceful men.

Intelligence gathered by this and other governments leaves no doubt that the Iraq regime continues to possess and conceal some of the most lethal weapons ever devised. This regime has already used weapons of mass destruction against Iraq's neighbors and against Iraq's people.

The regime has a history of reckless aggression in the Middle East. It has a deep hatred of America and our friends. And it has aided, trained and harbored terrorists, including operatives of al Qaeda.

The danger is clear: using chemical, biological or, one day, nuclear weapons, obtained with the help of Iraq, the terrorists could fulfill their stated ambitions and kill thousands or hundreds of thousands of innocent people in our country, or any other.

The United States and other nations did nothing to deserve or invite this threat. But we will do everything to defeat it. Instead of drifting along toward tragedy, we will set a course toward safety. Before the day of horror can come, before it is too late to act, this danger will be removed.

The United States of America has the sovereign authority to use force in assuring its own national security. That duty falls to me, as Commander-in-Chief, by the oath I have sworn, by the oath I will keep.

Recognizing the threat to our country, the United States Congress voted overwhelmingly last year to support the use of force against Iraq. America tried to work with the United Nations to address this threat because we wanted to resolve the issue peacefully. We believe in the mission of the United Nations. One reason the U.N. was founded after the second world war was to confront aggressive dictators, actively and early, before they can attack the innocent and destroy the peace.

In the case of Iraq, the Security Council did act, in the early 1990s. Under Resolutions 678 and 687 -- both still in effect -- the United States and our allies are authorized to use force in ridding Iraq of weapons of mass destruction. This is not a question of authority, it is a question of will. 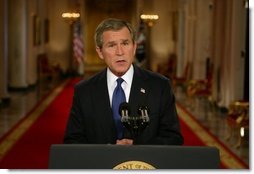 Last September, I went to the U.N. General Assembly and urged the nations of the world to unite and bring an end to this danger. On November 8th, the Security Council unanimously passed Resolution 1441, finding Iraq in material breach of its obligations, and vowing serious consequences if Iraq did not fully and immediately disarm.

Today, no nation can possibly claim that Iraq has disarmed. And it will not disarm so long as Saddam Hussein holds power. For the last four-and-a-half months, the United States and our allies have worked within the Security Council to enforce that Council's long-standing demands. Yet, some permanent members of the Security Council have publicly announced they will veto any resolution that compels the disarmament of Iraq. These governments share our assessment of the danger, but not our resolve to meet it. Many nations, however, do have the resolve and fortitude to act against this threat to peace, and a broad coalition is now gathering to enforce the just demands of the world. The United Nations Security Council has not lived up to its responsibilities, so we will rise to ours.

In recent days, some governments in the Middle East have been doing their part. They have delivered public and private messages urging the dictator to leave Iraq, so that disarmament can proceed peacefully. He has thus far refused. All the decades of deceit and cruelty have now reached an end. Saddam Hussein and his sons must leave Iraq within 48 hours. Their refusal to do so will result in military conflict, commenced at a time of our choosing. For their own safety, all foreign nationals -- including journalists and inspectors -- should leave Iraq immediately.

Many Iraqis can hear me tonight in a translated radio broadcast, and I have a message for them. If we must begin a military campaign, it will be directed against the lawless men who rule your country and not against you. As our coalition takes away their power, we will deliver the food and medicine you need. We will tear down the apparatus of terror and we will help you to build a new Iraq that is prosperous and free. In a free Iraq, there will be no more wars of aggression against your neighbors, no more poison factories, no more executions of dissidents, no more torture chambers and rape rooms. The tyrant will soon be gone. The day of your liberation is near.

It is too late for Saddam Hussein to remain in power. It is not too late for the Iraqi military to act with honor and protect your country by permitting the peaceful entry of coalition forces to eliminate weapons of mass destruction. Our forces will give Iraqi military units clear instructions on actions they can take to avoid being attacked and destroyed. I urge every member of the Iraqi military and intelligence services, if war comes, do not fight for a dying regime that is not worth your own life.

And all Iraqi military and civilian personnel should listen carefully to this warning. In any conflict, your fate will depend on your action. Do not destroy oil wells, a source of wealth that belongs to the Iraqi people. Do not obey any command to use weapons of mass destruction against anyone, including the Iraqi people. War crimes will be prosecuted. War criminals will be punished. And it will be no defense to say, "I was just following orders."

Should Saddam Hussein choose confrontation, the American people can know that every measure has been taken to avoid war, and every measure will be taken to win it. Americans understand the costs of conflict because we have paid them in the past. War has no certainty, except the certainty of sacrifice.

Yet, the only way to reduce the harm and duration of war is to apply the full force and might of our military, and we are prepared to do so. If Saddam Hussein attempts to cling to power, he will remain a deadly foe until the end. In desperation, he and terrorists groups might try to conduct terrorist operations against the American people and our friends. These attacks are not inevitable. They are, however, possible. And this very fact underscores the reason we cannot live under the threat of blackmail. The terrorist threat to America and the world will be diminished the moment that Saddam Hussein is disarmed.

Our government is on heightened watch against these dangers. Just as we are preparing to ensure victory in Iraq, we are taking further actions to protect our homeland. In recent days, American authorities have expelled from the country certain individuals with ties to Iraqi intelligence services. Among other measures, I have directed additional security of our airports, and increased Coast Guard patrols of major seaports. The Department of Homeland Security is working closely with the nation's governors to increase armed security at critical facilities across America.

Should enemies strike our country, they would be attempting to shift our attention with panic and weaken our morale with fear. In this, they would fail. No act of theirs can alter the course or shake the resolve of this country. We are a peaceful people -- yet we're not a fragile people, and we will not be intimidated by thugs and killers. If our enemies dare to strike us, they and all who have aided them, will face fearful consequences.

We are now acting because the risks of inaction would be far greater. In one year, or five years, the power of Iraq to inflict harm on all free nations would be multiplied many times over. With these capabilities, Saddam Hussein and his terrorist allies could choose the moment of deadly conflict when they are strongest. We choose to meet that threat now, where it arises, before it can appear suddenly in our skies and cities.

The cause of peace requires all free nations to recognize new and undeniable realities. In the 20th century, some chose to appease murderous dictators, whose threats were allowed to grow into genocide and global war. In this century, when evil men plot chemical, biological and nuclear terror, a policy of appeasement could bring destruction of a kind never before seen on this earth.

Terrorists and terror states do not reveal these threats with fair notice, in formal declarations -- and responding to such enemies only after they have struck first is not self-defense, it is suicide. The security of the world requires disarming Saddam Hussein now.

As we enforce the just demands of the world, we will also honor the deepest commitments of our country. Unlike Saddam Hussein, we believe the Iraqi people are deserving and capable of human liberty. And when the dictator has departed, they can set an example to all the Middle East of a vital and peaceful and self-governing nation.

The United States, with other countries, will work to advance liberty and peace in that region. Our goal will not be achieved overnight, but it can come over time. The power and appeal of human liberty is felt in every life and every land. And the greatest power of freedom is to overcome hatred and violence, and turn the creative gifts of men and women to the pursuits of peace.

That is the future we choose. Free nations have a duty to defend our people by uniting against the violent. And tonight, as we have done before, America and our allies accept that responsibility.

Good night, and may God continue to bless America.