For Immediate Release
Office of the Press Secretary
February 28, 2003

THE PRESIDENT: Thanks for the warm welcome. It is a -- it's an honor for me to speak to the men and women who go to work every day and every night to protect our great country. Since the day this nation was attacked, you have been on the front lines on the war against terror. You've worked hard under urgent and sometimes incredibly difficult circumstances. America is really grateful. 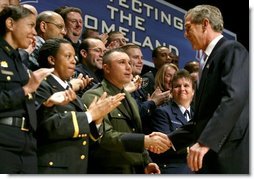 Tomorrow marks a historic day for our government and for our country. Around 170,000 people from more than 20 federal agencies will officially join the new Department of Homeland Security, creating a more effective, organized and united defense of our homeland. Every member of this new Department accepts an essential mission to prevent another terrorist attack. Yours is a vital and important step in reorganizing our government to meet the threats of a new era as we continue the work of securing this country.

I picked a good man to be the first Cabinet Secretary of this new Department, a man who's got courage to lead, a man who speaks clearly about our goals, a man who understands accountability, and I appreciate my friend Tom Ridge for serving in this capacity. (Applause.)

I want to thank other members of my Cabinet who are here for this historic announcement. Attorney General John Ashcroft. Mr. General, thank you for coming. Ann Veneman, of the Department of Agriculture is with us today. Norm Mineta. Norm just got out of the hospital. (Applause.) Norm did an incredible job on the Transportation Security Agency. He was given a task that a lot of people thought would -- the Department of Transportation could never accomplish. And thanks to his leadership and his team, he did a fabulous job. You're looking pretty darn good to me, by the way. (Applause.)

Michael Garcia, INS; Chief Gus de la Vina, who is the Border Patrol. The men and women on the stage who represent thousands of our fellow citizens who care a lot about our country, the people in the audience, thank you for giving me a chance to come. 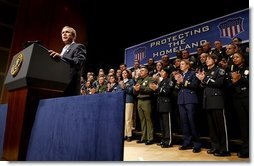 The world changed on September the 11th, 2001. We learned that a threat that gathers on the other side of the earth can strike our own cities and kill our own citizens. It's an important lesson; one we must never forget. Oceans no longer protect America from the dangers of this world. We're protected by daily vigilance at home. And we will be protected by resolute and decisive action against threats abroad.

We're tracking down terrorists who hate America, one by one. We're on the hunt. We got them on the run. And it's a matter of time before they learn the meaning of American justice. We're opposing terror regimes that are arming with weapons of mass destruction to threaten the peace and freedom of this world. And we're taking unprecedented measures to defend the homeland with the largest reorganization of our government in more than a half a century.

The agencies that join the Department of Homeland Security tomorrow will retain their longstanding responsibilities. And, of course, the individuals who join the Department will retain their rights as federal workers. Each agency, with its own proud and honored tradition, will also gain a new mandate and must adopt a new mind set. We created this Cabinet Department in a time of war. And every professional in the Department of Homeland Security plays a valuable role in winning the first war of the 21st century. For a vast and free nation, there is no such thing as perfect security. No such thing as a 100 percent guarantee that we're protected against the hidden network of cold-blooded killers. Yet, we're determined to do everything in our power to defeat this enemy and to defend our people, while upholding the great Constitution of the United States of America.

We've taken some critical steps to increase homeland security, and there's more work for this Department to do. The Department of Homeland Security is charged with analyzing the vulnerabilities of our nation's critical infrastructure, from dams to banks to seaports. And when our intelligence agency learn of new threats, the Department will move quickly to take protective action.

In meeting this responsibility, the Department will be a full partner in the new Terrorism Threat Integration Center which will integrate and analyze all threat information collected domestically and abroad in a single location. When the Center is fully operational, it will fully house a database of known and suspected terrorists that officials across this country will be able to access and to act upon.

In these and other efforts, the FBI, and the CIA, are communicating and cooperating as never before. The FBI has made preventing terrorism its top priority, and increased agents assigned to counter-terror efforts by nearly 40 percent. I want to thank the leadership of Bob Mueller. He and the agents who work for the FBI are doing a fantastic job on behalf of the American people. (Applause.)

The Department of Homeland Security is also charged with strengthening our defenses against cyber-terrorism and the even greater dangers of biological, chemical or nuclear weapons. We've established a science and technology directorate within the Department so we can apply some of our nation's best minds to the task of protecting our people.

I've nominated a good man, Dr. Charles McQueary, to head up this effort. His team is engaged in a major effort to develop and deploy the technologies for detecting weapons of mass destruction. As these technologies are deployed, border inspectors will have better tools to intercept dangerous materials before they enter our country. Emergency services personnel will be able to identify biological or chemical weapons and agents so they can use the most effective decontamination methods available. And as part of the BioWatch Initiative, we are deploying early warning sensors around the country to help detect potential biological attacks.

This week, I sent to Congress my proposal for Project BioShield, a major research and production effort to guard our people against bioterrorism. I've requested nearly $6 billion for this project, to quickly make available effective vaccines and treatments against agents like anthrax, botulinum toxin, ebola, and plague. We must assume that our enemies would use these diseases as weapons. And we must act before the dangers are upon us. I urge the Congress to pass this legislation as soon as possible.

The Department of Homeland Security is charged with promoting cooperation between Washington and state and local governments. Our enemies can strike anywhere in America, and we must be ready to respond in a coordinated way. Through the Homeland Security Advisory System, we have created a unified process for alerting government officials and the public of current threats. We're also providing more information about suspected terrorists to state and local law enforcement agencies. And with this new Department, state and local officials will now have a single point of contact to help them address the needs of the local area.

The Department of Homeland Security is charged with safeguarding our border and transportation systems. September the 11th taught us that terrorists will try to use the openness of our country against us. We must understand and correct our vulnerabilities. And we need to know who's coming in and who's going out of our country. We're working with our good friends, Canada and Mexico, to strengthen our law enforcement at the borders.

The Transportation Security Administration has assigned thousands of air marshals to commercial flights and deployed more than 50,000 newly trained airport screeners. TSA is also screening all checked luggage at our airports -- up from 5 percent before September the 11th, 2001. Starting tomorrow, four different organizations that patrol and enforce laws at our borders will be integrated into a new Bureau of Customs and Border Protection. This bureau will unify border inspection and enforcement functions, so that legitimate visitors and goods can enter the United States, while giving us better tools to help deny entry to terrorists, drug traffickers and dangerous materials.

Inspectors will be posted at more than 20 ports around the world to examine high-risk cargo before it sets sail to our country. The new Department is charged with responding to any terror attack that may come. We are moving forward on essential preparations here in America.

Over the past 18 months, we have significantly enhanced our national stockpile of critical drugs, vaccines and other medical supplies. Supplies from this stockpile can be delivered wherever they are needed, anywhere in this country, within 12 hours. We've provided more than $900 million in support to help state and local responders and emergency managers prepare for terrorist attacks. And we've supported the training of more than 100,000 first responders since September the 11th, 2001.

I proposed record funding for the first responders, $3.5 billion in the current budget. I've also requested another $3.5 billion in the 2004 budget. Unfortunately, the Congress was late in passing the appropriation bill of 2003. They reduced my total request for state and local enforcement and emergency personnel by $1 billion, and designated part of the funding to go to other priorities. I signed the appropriations bill to make sure that we can finally begin to distribute funding to the states. The leaders in the House and Senate are aware of my concerns, and they share them. These leaders know that I will continue to do everything in my power to direct as much of this funding as possible toward training and equipping police, fire fighters, and EMTs to prepare and respond to potential terrorist attacks.

Beginning tomorrow, the Department of Homeland Security will be responsible for coordinating our national response to terrorist attacks. Secretary Ridge has already created 24/7 Homeland Security Center, ready to act at the first sign of any emergency. And I'll be issuing a directive ordering the establishment of a unified national incident management system. The system will provide government agencies with common procedures and standards for preparing and responding to emergencies.

Our nation has great challenges in securing our homeland, but we've got even greater advantages. We've got people like you all who serve with skill and, frankly, don't get enough credit for the work you do. Of course, you're not here to get the credit, you're here to do your job. We've got brave and honorable men and women serving in our military, including the Coast Guard, ready to accomplish any mission they are given. And they will do so with courage and skill and honor.

Above all, we have the courage and character of the American people who are resolved to prevent further attacks on our homeland. March 1st marks an important day for our government and for our country. The work ahead won't always be easy. You've accepted a difficult mission. But I'm confident in the success of our efforts, because I'm confident in you.

I want to thank each of you for your service in freedom's cause. There is no doubt in my mind that this nation will prevail in this war against terror, because we're the greatest nation, full of the finest people, on the face of this earth.

May God bless your work, and may God continue to bless America. (Applause.)