Q Mr. President, consumer confidence numbers hit their lowest levels in, I think, nine years yesterday. And many of those surveyed say that they're more concerned about the economy than they are about Iraq. Money managers on Wall Street say that even when the uncertainty over what is happening in Iraq is resolved, there remain many obstacles of a purely business nature that leave them less than confident looking forward. Are you frustrated by the sense that perhaps perception could become reality here, that the lack of confidence seems to be becoming more entrenched? 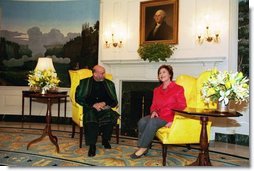 PRESIDENT BUSH: I've got confidence in the future of our economy. There's strong signals that this economy will improve. But I understand we need to have a stimulus package to make sure that the forecasts and the predictions become true. A lot of the experts are projecting growth at 3.3 percent. Inherent in their projections is that Congress pass a stimulus package, fiscal stimulus package. I proposed the one that I think will work.

But I'm very optimistic about the future of this country

-- the economic future, and I'm optimistic about our chances to achieve peace.