For Immediate Release
Office of the Press Secretary
February 18, 2003

THE PRESIDENT: Darn right. Bill, welcome, and Jane, thanks for coming. It's my honor to welcome your family here to the Roosevelt Room. And I'm proud to welcome Bill Donaldson as the Chairman of the Securities and Exchange Commission.

Bill will be a strong leader of the SEC and a forceful advocate for the interests of investors. He's the right man at the right time. We're so honored you've agreed to accept this challenge, really appreciate it. 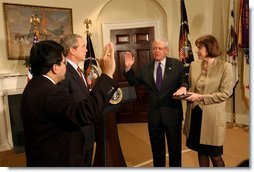 Bill Donaldson spent a career preparing for this challenge. He has served as a founder of a leading investment banking firm, the Chairman of the New York Stock Exchange, the founding dean of the Yale School of Management. He has set high standards throughout his entire career. He will lead an active and energetic agency.

This agency has been working hard. They've last year filed a record number of actions for financial reporting and disclosure violations, sought the removal of more than 100 corporate officers and directors on the grounds of misconduct and ordered corporations and executives to return to investors hundreds of million dollars in improper gains.

This administration is committed to the enforcement of the security laws. We're committed to creating a climate of confidence in our markets. There's no better person to help achieve that commitment than Bill Donaldson. In the 2004 budget, I'm asking Congress to increase SEC funding by 73 percent over the year 2002. We want to make sure the SEC has the tools necessary to pursue its important mission.

This nation is increasingly a nation of stock holders, who invest for their families and for their futures. Americans should be confident in the information they use in order to make investment decisions. All investors deserve to be treated fairly in the tax code, as well. Investors should not be punished for saving and investing in America's future.

Investors should not be -- should be rewarded for taking risk in the marketplace. The tax code ought to treat these people fairly, and so that's why I've proposed that Congress end the unfair and unwise double taxation of dividends. This measure could improve corporate governance in America, as well.

Companies across America attract investors in a number of ways. One such way is to promise rampant growth; is to say, even though we may not have cash flow, the future of our company is magnificent, therefore, invest with us. Another way, of course, is to promise a steady source of income in the form of dividends. Eliminating double taxation dividends would give more companies a reason to distribute their profits through direct cash to investors in the form of dividends.

Dividends serving as a stronger foundation for long-term value, companies that pay them will have less motive to artificially inflate profits just to cause temporary increases in stocks. The law should not discriminate against those companies that focus on stable, long-term growth.

Eliminating the double taxation dividends is good for American investors, it's good for American seniors, it's good for corporate reform. I'm glad Bill Donaldson has agreed to take charge of an agency with the vital purpose of showing the American investor that they're -- rely upon the data on which they use to evaluate investments, to really say to the markets loud and clear that we expect there to be corporate integrity throughout our system.

This is a man who has not only set high standards, but has achieved them. He's got a lot of talent and a lot of drive, a lot of wisdom and a lot of integrity.

CHAIRMAN DONALDSON: Mr. President, thanks for this honor and the opportunity to serve our country as Chairman of the Securities and Exchange Commission. Over the last decade, we have seen unprecedented growth in the number of Americans who invest. Ownership of stocks, bonds and other investment vehicles is no longer limited to the wealthy or to financial professionals. It is now an accessible option for all hard working Americans as they seek to grow their retirement funds and save for their children's education.

We have learned, though, that with such growth comes some severe challenges. In recent years, as we all know, serious violations of our security laws and regulations have severely shaken public confidence in a corporate and financial world.

The mission of the SEC, and my duty as Chairman, is very clear. We will hold accountable all those who have violated the public trust. We will demand responsible corporate governance throughout the business and financial world. We will strengthen our market structure, making the markets more efficient, more transparent, and friendlier to all investors, particularly small investors.

Strictly enforced and clearly understood laws, however, will not be enough in my view. It is time that all those who manage and govern our corporate and financial institutions show true leadership. As Chairman of the SEC, I will call upon them individually and collectively to create a new environment of integrity and accountability that goes well beyond adherence to laws.

This must happen person by person, company by company. I believe that such a dedication by all involved will offer a renewed sense of confidence in the honest functioning and potential of our markets.

Mr. President, I pledge to you and to all American investors that I, along with my new colleagues at the Securities and Exchange Commission, will pursue this mission with vigor and absolutely unwavering commitment. I look forward to the task and I'm eager to get to work. Thank you.

THE PRESIDENT: Thank you. Ron, I'll answer a couple of questions here.

Q Thank you, Mr. President. What do you make of the fact that millions of people across the globe have taken to the streets to protest your approach to Iraq? And if you decide to go to war, how do you wage a campaign in the face of such stiff opposition?

You know, I -- war is my last choice. But the risk of doing nothing is even a worst option as far as I'm concerned. I owe it to the American people to secure this country. I will do so.

Q Have you decided how to do so yet?

THE PRESIDENT: Pardon me?

Q Have you decided how you're going to deal with him yet?

THE PRESIDENT: If he chooses not to disarm, as I have been saying for a long time, Ron, we'll lead a coalition of the willing to disarm him.

Q Should a second resolution on Iraq include a deadline? And how are you going to get around the opposition from France, Russia and China?

Q With a deadline?

THE PRESIDENT: We're working with our friends and allies right now to -- how best to get a resolution out of the United Nations. As I say, it would be helpful to get one out. It's not necessary, as far as I'm concerned.

Q Mr. President, are you any closer to an aid package for Turkey, particularly given the continued problems with NATO regarding any defense of Turkey?

THE PRESIDENT: Well, first of all, as you know NATO did -- did express their desire to help Turkey. And I appreciate the NATO allies. I also appreciate the EU statement yesterday that Saddam Hussein needs to fully disarm. I thought those were positive developments. We're working closely with the Turks. And, you know, we got great respect for the Turkish government. They've got -- had no better friend than the American government. And hopefully we can come up with an agreement that's satisfactory to both parties. We're still working it.

Q Mr. President, would it be easier to win the peace after the war in Iraq -- if there is one -- if you had the allies with you going in? And what about the idea of an ultimatum for Saddam, another last chance?

THE PRESIDENT: Well, you mean another, another, another last chance? He knows my feelings. And that is he needs to disarm -- completely, totally disarm. Listen, he's a fellow that likes to buy time by -- through deception and delay. He believes time is on his side. After all, he was quoted in an Egyptian newspaper saying all he's got to do is stall and defy the world and, you know, coalitions will fall apart. I am determined to keep the peace. I'm determined to hold this man to account.

Those are the threats of the 21st century. The best way to deal with those threats is to have international organizations which are effective. And if the United Nations can't enforce its own resolutions -- a resolution which, by the way, has been around for 12 years -- it says something about its utility as we head into the future.

Q Given the size of the protests in England over the weekend, do you have any concerns that Tony Blair might pay a serious political price for supporting you on Iraq?

THE PRESIDENT: I think any time somebody shows courage, when it comes to peace, that the people will eventually understand that.

First of all, you know, size of protest, it's like deciding, well, I'm going to decide policy based upon a focus group. The role of a leader is to decide policy based upon the security -- in this case, the security of the people. Tony Blair understands that Saddam Hussein is a risk. Tony Blair sees that, you know, a weakened United Nations is not good for world peace. And he is a courageous leader and I'm proud to call him friend.

Another courageous leader is coming to the ranch this weekend, Jose Maria Aznar. I'm looking forward to having a good meeting with him. These are men of vision. They see the task at hand. And I'm proud to call them allies. We'll work together for the sake of peace.