THE PRESIDENT: Thank you all very much. Admiral, thank you for that -- for those kind words. And thanks for the warm welcome. I'm honored to be with the servicemen and women, and families of the Jacksonville Naval community. I'm proud to be at Naval Station Mayport.

Last August, the sailors and pilots of the Big John -- (applause) -- returned from four months in the North Arabian Sea, where you served in Operation Enduring Freedom. With your outstanding performance, you proved that "Jack is back." (Laughter.) 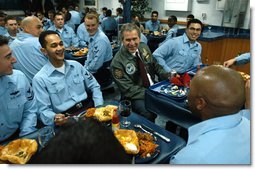 Some of you here have served in the USS Enterprise battle group. You were among the first American ships in the Afghan theater. And when it came time to strike the terrorists in Afghanistan, you were ready on arrival. (Applause.) Together, the Big John and the Big E launched thousands of sorties from their desks, supporting coalition forces on the ground. You helped liberate the Afghan people. You defended the American people. And each and every one of you here has made America proud.

The United States Navy carries the might and the mission of America to the farthest parts of this world. In this challenging period for our country, great tasks lie ahead for the Navy, and for our entire military. And I know we can depend on you, because this United States military is second to none. (Applause.)

I want to thank the members from the congressional delegation -- Ander Crenshaw, who represents this district. I know he's a strong supporter of the military families living here in Jacksonville. And I appreciate John Mica coming, as well. These are two members of the United States Congress that I know I can count on when it comes to making sure this United States military is strong and ready. (Applause.)

I want to thank State Senator Jim King, and his wife Linda, for being here today. I appreciate all the leadership from different battle groups here -- based here.

Today, when I landed on Air Force One, I met a fellow named Arden Battle. He is a machinist mate, senior chief, U.S. Navy. Let me tell you something. He represents the spirit of this military that makes me proud. Not only are we tough and good fighters; he leads hundreds of your fellow sailors into volunteering in the community in Jacksonville, Florida. He and others like him serve as a role model for young kids. He mentors. He and his group teach children how to read. He not only serves this country to keep the peace, he serves this country to be more compassionate for all of our citizens.

My call to you is, a lot of people look up to you because you wear the uniform. Do your duty. Not only work hard to be a good soldier and sailor, but also love somebody like you'd like to be loved yourself. 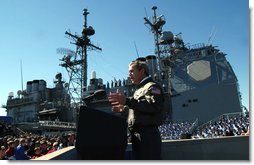 I want to thank Arden and all those of you who have heard a call to become involved in your neighborhoods and your communities to help somebody who hurts. America is a better place for your compassion and your love. (Applause.)

I want to thank the other community leaders who are here. I want to thank those of you who support our military. But I'm particularly grateful to all the military families who are here with us today. (Applause.) Family members serve and sacrifice for our nation. Each one of you knows that Navy life is rewarding, but it can be dangerous, it can be difficult. Every day our military families are putting America's interests first, and America thanks you.

Across this great land, I hear it all the time, the people of this country admire our men and women in uniform. They're praying for you. They're concerned about you and your families. Our people in uniform and families deserve our gratitude and you deserve our support.

Across six decades, ever since World War II, Mayport has been providing the "Finest Service to the Finest Fleet." This port has been home to generations of sailors who fought America's battles with distinction and courage. Now you're called to defend our freedom and to defend the security of America against a new kind of enemy.

This enemy reaches across oceans; it targets the innocent. There are no rules of war for these cold-blooded killers. They seek biological and chemical and nuclear weapons to commit murder on a massive scale. This enemy will not be restrained by mercy, or by conscience. This enemy will be stopped, and it will be stopped by the might and will of the United States and our friends and our allies. (Applause.)

The terrorists brought this war to us -- and now we're taking it back to them. (Applause.) We're on their trail, we're smoking them out, we've got them on the run. We're hunting them down one by one, all across the world. With our allies, we've arrested or otherwise dealt with -- (laughter) -- many of the key commanders of al Qaeda. And that includes the terrorist who planned the bombing of the USS Cole. (Applause.)

So far, more than 3,000 suspected terrorists have been arrested in many countries. Just about that number met a different kind of fate. They're not a problem anymore. (Applause.)

The world changed on September the 11th, 2001. You see, we learned that oceans no longer protect us; that a threat that gathers on the other side of the Earth can strike our own cities, can kill our own people. That's what we learned. And I'm not going to forget that lesson. You see, we saw what terrorists could do, with four airplanes as weapons. We're not going to wait and see what they can do with even deadlier weapons. (Applause.)

Today the gravest danger in the war on terror -- the gravest danger facing America and the world -- is outlaw regimes that seek and possess nuclear, chemical and biological weapons. These regimes could use such weapons for blackmail, terror, mass murder. They could also give or sell those weapons to terrorist allies who would use them without the least bit of hesitation. That's the reality of the world we live in, and that's what we're going to use every ounce of our power to defeat.

The civilized world has awakened to the growing danger posed by the Iraqi regime. Twelve years ago, Saddam Hussein agreed to disarm as a condition of suspending the Gulf War. Three months ago, the United Nations Security Council gave him a final chance to meet that obligation. Saddam Hussein is not disarming, he's deceiving.

America has laid out the facts for the world to see. Saddam Hussein has chemical weapons programs, and the means to use them. Saddam Hussein has a biological weapons program, and the means to deliver those weapons. He has secretly attempted to obtain materials needed to produce nuclear weapons. Saddam Hussein aids and protects terrorists, including members of al Qaeda. He harbors a senior al Qaeda leader who ordered the assassination of an American diplomat -- the same man who plotted against Spain and Italy in the Republic of Georgia, and Russia, and Great Britain, and France, and Germany. The Iraqi regime is engaged in a massive campaign to conceal its weapons of mass destruction, and its ties to terrorists. And that deception continues today.

At any moment during the last 97 days -- and during the last 12 years -- Saddam Hussein could have completely and immediately disarmed himself. Instead, he's used all this time to build and to hide weapons. He must be hoping that by stalling he'll buy himself another 12 years. He's wrong. (Applause.) This country will not accept a serious and mounting threat to our nation, our people, and our friends and allies. (Applause.)

America will also be acting with friends and allies. An overwhelming majority of NATO members oppose the threat of Iraq, and understand that tough choices may be necessary to keep the peace. Many nations have offered to provide forces or other support to disarm the Iraqi regime. Every nation of the Gulf Cooperation Council has agreed to help defend and protect Kuwait. And now the world's most important multilateral body faces a decision.

I'm optimistic that the U.N. Security Council will rise to its responsibilities, and this time ensure enforcement of what it told Saddam Hussein he must do. See, I believe when it's all said and done, free nations will not allow the United Nations to fade into history as an ineffective, irrelevant debating society. (Applause.) I'm optimistic that free nations will show backbone and courage in the face of true threats to peace and freedom.

If there is a conflict, American forces will act in the honorable traditions of our military, and in the highest moral traditions of this country. Our military will be fighting the oppressors of Iraq, not the people of Iraq. (Applause.) America's military fights not to conquer, but to liberate. (Applause.)

In case of conflict, this great nation is already putting plans and supplies into place, so that food and other humanitarian relief will flow quickly to the Iraqi people. You see, we seek more than the defeat of terror; we seek an advance of freedom and a world at peace. (Applause.) That is the charge that history has given us -- and that is a charge we will keep. (Applause.)

In crucial hours, the success of our cause will depend on the men and women of our military. You serve this nation's ideals, and you live out those ideals in your code and in your character. I've seen your love of country, and your devotion to a cause larger than yourself. I've seen your discipline, your idealism, and your sense of honor. I know that every mission you are given will be carried out with skill and unselfish courage.

The first time the USS Enterprise was ever deployed in a crisis was October 1962, when President John F. Kennedy ordered it to quarantine Cuba, which was arming itself with nuclear missiles aimed at our nation. President Kennedy understood that dangers to freedom had to be confronted early and decisively. He said of the Cold War, "These are extraordinary times. We face an extraordinary challenge. Our strength, as well as our convictions have imposed upon this nation the role of leader in freedom's cause."

Today, at the dawn of a new century, America is still the leader in freedom's cause. (Applause.) And our generation is called to a central role in this nation's history. As Americans, we can be confident: The American people are strong and resolute. The American Armed Forces are brave and ready. And in freedom's cause, we will prevail. (Applause.)