For Immediate Release
Office of the Vice President
February 6, 2003

THE VICE PRESIDENT: We are here today to honor the memory of seven lost explorers, to mourn seven good men and women, and to offer the respects of a grateful nation.

Saturday morning brought terrible news to all Americans; and the flag of our country was lowered to half-staff in honor of our fallen Columbia astronauts. They were soldiers and scientists, doctors and pilots -- but, above all, they were explorers. Each of them followed his or her own path to the space program. Each led a life of high purpose and high achievement.

The crew of the Columbia was united not by faith or heritage, but by the calling they answered and shared. They were bound together in the great cause of discovery. They were envoys to the unknown. They advanced human understanding by showing human courage.

The men and women aboard the Columbia were driven by a fierce determination to make life better here on earth by unlocking the mysteries of space. Their 16-day, six-million mile mission was devoted to research, and they worked 24 hours a day in alternating shifts on experiments in the physical sciences, the life sciences, and the space sciences.

Every great act of exploration involves great risk. The crew of the Columbia accepted that risk in service to all mankind. The Columbia is lost, but the dreams that inspired its crew remain with us. Those dreams are carried by the families of the astronauts who, even in grief, have urged that America go on with our space program. "The legacy of Columbia must carry on," they tell us, "for the benefit of our children -- and yours."

Those dreams are carried by the dedicated men and women of NASA, who -- time and time again -- have achieved the seemingly impossible and whose strength and skill will return us to space. And the dreams of the Columbia crew will continue to inspire America. We are a nation of pioneers and immigrants, of bold explorers and discoverers, and we have invited kindred souls from many nations to join us in the greatest of all voyages. In doing so, we honor the heritage of our country and help shape the future of all mankind.

Two generations ago, the United States embarked on a course of space exploration. Today, despite this tragedy, we remain on that course. And while many memorials will be built to honor Columbia's crew, their greatest memorial will be a vibrant space program with new missions carried out by a new generation of brave explorers.

America and all the world will always remember the first flight of the Columbia in 1981. And we will never forget the men and women of her final voyage: Willie McCool, Kalpana Chawla, Ilan Ramon, Michael Anderson, David Brown, Laurel Clark and Rick Husband. 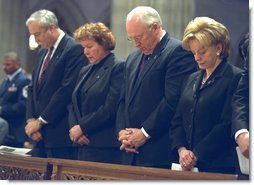 May a merciful God receive these seven souls. May He comfort their families. May He help our nation to bear this heavy loss. And may He guide us forward in exploring His creation.