For Immediate Release
Office of the Press Secretary
February 6, 2003

THE PRESIDENT: Thanks for the warm welcome. I'm glad you're here and I'm glad I'm here. The technology that we have just seen -- and I hope you take a look at -- is going to be seen on the roads of America. And it's important for our country to understand that by being bold and innovative, we can change the way we do business here in America; we can change our dependence upon foreign sources of energy; we can help with the quality of the air; we can make a fundamental difference for the future of our children. 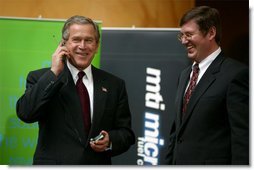 By what we do today can make a tremendous difference for the future of this country. How we invest taxpayers' monies today can help change the world. And that's what we're here to discuss.

I want to thank my Secretary of Energy, Spence Abraham, for doing a fine job, for being willing to help us think beyond the normal by leading an important department, a department that's going to help America maintain a technological advantage when it comes to energy and devices that require energy.

I also want to thank Christie Todd Whitman for being a really, really good Administrator of the Environmental Protection Agency. And I want to thank all of the employees from both the Energy Department and the EPA who are here today. Thank you for your service to the country. I appreciate so very much members of the United States Senate who are here: Pete Domenici, from New Mexico; and Byron Dorgan, from North Dakota. Thank you, all, for your interest in this project. I look forward to working with both distinguished members of the Senate to get this initiative through.

And I want to thank the folks who have brought your technologies here for me to see. I wish I had more time to spend. but in the brief tour I took, it is -- we're on the cutting edge of change that is going to dramatically change this country for the better. And it's exciting to see the products that you're producing. More importantly, it's exciting to meet the entrepreneurs who are willing to take the risks necessary to produce those products.

I also want to thank the students who are here, the science and technology students who are here -- our future scientists, those who are going to take what appears to be dramatic innovation today and improve on it in the coming years. And so thanks for your interest and thanks for caring about your country. Keep studying hard. Don't watch too much TV. (Laughter.) Read a lot. 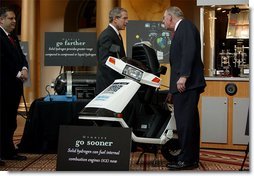 I laid out a comprehensive energy plan last year. It got -- there was a lot of debate about it, a lot of discussion. It didn't pass the Congress. I expect it to pass this year. I look forward to working with you, Mr. Chairman. It's a plan that will encourage conservation. It's a plan that will increase production at home in an environmentally sensitive way. It is a plan which will modernize our electricity delivery systems. It is a plan which is needed. It is a plan needed for economic security. It is a plan needed for national security. I want to sign a comprehensive energy bill this year. (Applause.)

Today, we have a chance to move beyond the environmental debates of the past, debates that centered around regulation and lawsuit -- what I like to call the command and control era of environmental policy, where all wisdom that seemed to emanate out of Washington, D.C. where things got hamstrung and stuck because lawyers got more involved in the process than the people on the front lines of actually improving our environment.

We can move beyond that through technology, and that's what I want to discuss today. Hydrogen fuel cells represent one of the most encouraging, innovative technologies of our era. And if you're interested in our environment and if you're interested in doing what's right for the American people, if you're tired of the same old endless struggles that seem to produce nothing but noise and high bills, let us promote hydrogen fuel cells as a way to advance into the 21st century. (Applause.)

And there's a lot of advantages that I want to explain to the American people about why this initiative makes sense. First, the hydrogen can be produced from domestic sources -- initially, natural gas; eventually, biomass, ethanol, clean coal, or nuclear energy. That's important. If you can produce something yourself, it means you're less dependant upon somebody else to produce it.

And not only that, the sources of hydrogen are abundant. The more you have of something relative to demand for that, the cheaper it's going to be, the less expensive it'll be for the consumer. The more supply you have of something, one, you're not going to run out of it and, two, it means that society is going to be more friendly for those who are trying to purchase the supply for needed -- for life's needs.

Hydrogen power is also clean to use. Cars that will run on hydrogen fuel produce only water, not exhaust fumes. Eliminating pollution from cars will obviously make our air healthier. Hydrogen power will dramatically reduce greenhouse gas emissions, helping this nation take the lead when it comes to tackling the long-term challenges of global climate change.

One of the greatest results of using hydrogen power, of course, will be energy independence for this nation. It's important for our country to understand -- I think most Americans do -- that we import over half of our crude oil stocks from abroad. And sometimes we import that oil from countries that don't particularly like us. It puts us at a -- it jeopardizes our national security to be dependant on sources of energy from countries that don't care for America, what we stand for, what we love. It's also a matter of economic security, to be dependent on energy from volatile regions of the world. Our economy becomes subject to price shocks or shortages or disruptions, or one time in our history, cartels.

If we develop hydrogen power to its full potential, we can reduce our demand for oil by over 11 million barrels per day by the year 2040. (Applause.) That would be a fantastic legacy to leave for future generations of Americans. See, we can make the world more peaceful, and we will; we can promote freedom, and we will. Those will be wonderful legacies. But also think about a legacy here at home, about making investments today that will make future citizens of our great country less dependent on foreign sources of energy. And so that's why I'm going to work with the Congress to move this nation forward on hydrogen fuel cell technologies. It is in our national interest that we do so.

So I'm asking Congress to spend $1.2 billion on a new national commitment to take hydrogen fuel cell cars from the laboratory to the showroom. And as I said in my State of the Union, the idea is to see that a car born today -- I mean, a child born today will be driving a car, as his or her first car, which will be powered by hydrogen and pollution-free. (Applause.)

It won't be easy to get there because there are obstacles. It's important for the American people to know. There are obstacles to overcome. I wouldn't be proposing this initiative if I didn't think we could overcome the obstacles. We must make hydrogen more plentiful and produce it in the most efficient, cost-effective way. That is one of our challenges. We must lower the cost of fuel cells, so that the automobile can compete -- the cost of the automobile is cost effective. We must increase the capacity of hydrogen storage systems.

And we put in place the infrastructure to get hydrogen to the consumers. There would be nothing worse than developing a car and having no place for somebody to find the fuel. People aren't going to buy many cars if they can't refuel their car. (Laughter.) The work has well begun -- the freedom car initiative to created partnerships between our government and the auto makers to engineer the next generation of hydrogen fuel cells to power cars. And we're making progress.

The new effort that we're undertaking with Congress' help is to develop a system for producing and delivering hydrogen fuel so that when the cars are ready, people can fill them up at their convenience. It's a big project because we're -- we'll be changing years of habit, years of infrastructure must be replaced by a modern way. But we'll achieve this. It's going to make economic sense to do this, it's going to mean that our air is cleaner, and our national security is more secure. It's going to happen. And I look forward to working with Congress to start the process.

Pete, I don't know if you and I are going to be driving one of these cars, but our grandkids will. And we can be -- we can say we did our duty. You know, we can look back and say, we came, stayed here for just a little bit, proposed some initiatives that would fundamentally alter the American way of life in a positive way, got it started, and went home -- knowing we were called upon, and we answered the bell.

And as we -- and I believe we can lead the world for creating a market for hydrogen. We're also going to work to produce electricity and hydrogen through a process called fusion. Fusion is the same kind of nuclear reaction that produces -- that powers the sun. The energy produced will be safe and clean and abundant. We've spent quite a bit of money, as the senators here will tell you, on whether or not fusion works. And we're not sure if it will be able to produce affordable energy for everyday use. But it's worth a try. It's worth a look. Because the promise is so great.

So the United States will work with Great Britain and several European nations, as well as Canada, Japan, Russia and China, to build a fusion test facility and create the largest and most advanced fusion experiment in the world. I look forward to working with Congress to get it funded. I know you all have considered this in the past. It's an incredibly important project to be a part of.

Imagine a world in which our cars are driven by hydrogen and our homes are heated by electricity from a fusion power plant. It'll be a totally different world than what we're used to. The quality of life will be advanced. And people will say, gosh, I'm glad those folks went to Washington and were willing to think beyond the current. We're willing to have a vision for what is possible. After all, that's what a lot of our forefathers used to think. That's how they envisioned a better America, for the America we have today. And we have that opportunity here in Washington, D.C. We have the opportunity to blaze new paths. I'm willing to get on a path. I know the members of Congress here are willing to get on the path. It makes sense for America to do so.

For the entrepreneurs here, thanks for being an entrepreneur. Keep dreaming your dreams. It's the collective dreams of the American entrepreneurial set which really define our future for us. Here today, I'm going to say your government is not to stand in your way, but stand by your side as we blaze new paths for our country.

Thank you all for your interest. God bless. (Applause.)