For Immediate Release
Office of the Press Secretary
January 30, 2003 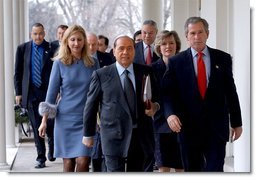 First, it's my honor to welcome Silvio Berlusconi back, he is a personal friend. Italy is a great friend of America, America is a great friend of Italy. The Prime Minister and I will of course be talking about a lot of matters, the most significant matter will be how to keep the peace, how to make the world a peaceful place.

I am most grateful that the Prime Minister signed a letter, along with other leaders of European countries, which clarified the issue that we're dealing with -- and that is that Saddam Hussein is a clear threat to peace. It was a strong statement. It also was a statement of solidarity with the United States, and I appreciated that very much.

THE PRIME MINISTER: Thank you.

THE PRESIDENT: I appreciate your friendship. I welcome you back to the Oval Office and look forward to having a long and fruitful discussion.

THE PRIME MINISTER: We are here for good work, for a just cause and for everybody, I think. And I am here with a friend, with a country, that is the best friend of my country.

THE PRESIDENT: Well, thank you. And your English is very good.

THE PRIME MINISTER: No, no. I have never the time. We have so much to do in Italy, I have not time to --

THE PRESIDENT: Not the time to practice?

THE PRESIDENT: Well, thank you for that kind comment. Ron.

Q Sir, are you open to giving Saddam a final deadline, and you willing to let him slip into exile -- this, a man who recently said he wants to break the neck of our country?

THE PRESIDENT: First, let me echo the comments of my National Security Advisor, who the other day in commenting about this process said this is a matter of weeks, not months. In other words, for the sake of peace, this issue must be resolved. Hopefully, it can be done peacefully. Hopefully the pressure of the free world will convince Mr. Saddam Hussein to relinquish power. And should he choose to leave the country, along with a lot of the other henchmen who have tortured the Iraqi people, we would welcome that, of course.

I will tell my friend, Silvio, that the use of military troops is my last choice, not my first. The commitment of young men and Americans into battle is a difficult decision, because I understand the cost of war. But I also understand the cost of inaction. There is a high price to be paid for the civilized world by not enforcing the opinion of the world, which was for Saddam Hussein to disarm.

Would you care to call on somebody from the Italian press?

THE PRIME MINISTER: In Italy, I already said it, I have the opportunity to say that we have always been the faithful ally country of United States, we are close friends of the United States, also in this case.

I believe that the moment has arrived to find out where all the weapons of mass destruction that Saddam Hussein said he had, where they ended up. We really fear that after the series of terrorist attack, which culminated with the attacks on September 11th, there is the intention of the terrorists is to really come to a terrible disaster. And to do so, they have to avail themselves of the biological, chemical weapons that we know were available as Saddam Hussein.

Therefore, on the basis of the United Nations Security Council Resolution 1441, Saddam Hussein has to reveal and account for the weapons that we know he has. So the decision on face rests in his hands. We all want peace.

And I'm here today to help my friend, President Bush, to convince everybody that this is in the interest of everybody. And if we are all united, the European Union, the United States, the Federation of Russia, everybody, all the other states under the United Nations, then Saddam Hussein will understand that he will have no other option but to reveal the arms and to destroy them.

THE PRESIDENT: Along those lines, let me make one clarification on my statement. I think that no matter how Mr. Saddam is dealt with, the goal of disarming Iraq still stays the same, regardless of who is in charge of the government. And that's very important for the Iraqi people to know.

And I also want to assure Silvio that should we require military action, shortly after our troops go in, will go food and medicine and supplies to the Iraqi people. We will, of course, win militarily, if we have to. But we'll also want to make sure that we win the peace, as well.

Would you care to call on somebody in the Italian press?

And to you, Mr. President, do you expect Mr. Berlusconi --

MR. DICKENS: Only one question.

THE PRESIDENT: I would have answered it, but they said, no. (Laughter.)

So for us, the United States is not only our friend, but they are the guarantee of our democracy and our freedom. And I already has the opportunity to say this to President Bush, every time I see the U.S. flag, I don't see the flag only representative of a country, but I see it as a symbol of democracy and of freedom.

THE PRESIDENT: Thank you, sir. Thanks.