For Immediate Release
Office of the Press Secretary
January 24, 2003

THE PRESIDENT: Good afternoon, and thank you all for coming. Welcome to the White House and welcome to this historic moment. As of today, the law creating the United States Department of Homeland Security comes into effect. And now this Department has its first Secretary, Thomas Joseph Ridge. 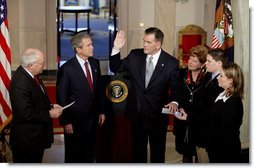 Homeland Security becomes the 15th executive department of my Cabinet. It begins a vital mission in the defense of our country. We've learned that vast oceans no longer protect us from the dangers of a new era. This government has a responsibility to confront the threat of terror wherever it is found.

And that is why we're taking the battle to America's enemies, disrupting their networks, we're destroying their camps, we've got them on the run and we're going to keep them on the run.

And at home we are taking every measure to protect the American people against a serious and ongoing threat. The Department of Homeland Security will lead a comprehensive and unified effort to defend this nation. The Department will analyze threats; guard our borders and airports; safeguard critical infrastructure and coordinate the response of our nation to future emergencies.

Under the leadership of Tom Ridge, more than 170,000 dedicated Americans, dedicated professionals, will have the overriding mission of protecting their fellow Americans.

In October of 2001, when I established the office -- the White House Office of Homeland Security -- I knew immediately that Tom was the right man for the assignment. He's a decisive, clear-thinking executive who knows how to solve problems. He's a person of integrity and a person of good judgment. At the White House he has done an outstanding job and he's earned the gratitude of the American people.

This week he earned an unanimous vote of confirmation. And I want to thank the United States Senate for its swift action. This new Department will face many challenges in the year to come. The American people can be certain that the mission of homeland security will be carried out with focus and resolve, with the resources the task requires. And the American people can know, as well, that the Department is under the command of a superb leader who has my confidence.

Congratulations, Tom, and thank you for serving our country. (Applause.)

THE PRESIDENT: Thank you, all. (Applause.)