For Immediate Release
Office of the First Lady
January 20, 2003

Thank you. And thank you, Senator Frist, Mr. Holmes, and Niger and Roy Innis for your warm welcome. New York is truly a fitting a place to celebrate the life of Dr. Martin Luther King. Like Dr. King, this city refuses to let hate and injustice tear it down. New York continues to stand as a beacon for freedom to the world – and embraces the words of Mahatma Gandhi, one of Dr. King’s great inspirations, who said, “My faith is brightest in the midst of impenetrable darkness.” 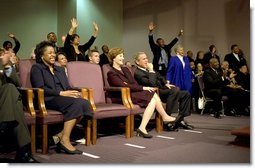 Today, the spirit of freedom burns brightly in the hearts of every New Yorker and every American. And so does the spirit of Dr. King – the spirit of compassion and service. We gather here to celebrate this spirit and to remember the life and the legacy of one of America’s great sons – a man who devoted his life to the pursuit of universal civil rights. When others preached hate, he spoke of love. When others took up arms, he was a purveyor of peace.

He inspired us to believe that a day would come when people of every race and faith would come together in a unified America. He spread a message of hope across this great land – from his hometown neighborhood of Sweet Auburn in Georgia; to the pulpit of the Dexter Avenue Baptist Church in Alabama; to the steps of the Lincoln Memorial in Washington. And all who believed in his message, dared to dream. Dr. King knew that America would not be free unless all of her citizens were truly free. He said, “The true neighbor will risk his position, his prestige and even his life for the welfare of others.” For Dr. King, those words became his destiny.

His life ended suddenly and violently. But Dr. King sought peace in his life and in the world. He practiced Gandhi's principles of nonviolent persuasion. He wrote in his memoir, Stride Toward Freedom, that "Living through the experience of the Montgomery protest, nonviolence became more than a method to which I gave intellectual assent; it became a commitment to a way of life."

The Congress of Racial Equality is also committed to the peaceful advancement of human rights for every person. For more than 60 years, CORE has led America on a journey of freedom and a “journey of reconciliation.” In 1955, CORE was with Dr. King and Rosa Parks in the Montgomery bus boycott. In 1963, CORE marched with Dr. King to Washington, DC, where more than 250 thousand people gathered to demonstrate their commitment to equality and justice. CORE was also there when President Lyndon Johnson signed the Civil Rights Act in 1964. Today, CORE continues to work for the advancement of civil rights in America. Through Project Independence, the Legal Defense Fund, and the Anti-Drug Taskforce, CORE is helping thousands to realize his dream of equality. Tonight, CORE honors Dr. King and the remarkable Americans their dreams. We honor four inspiring people who have translated the dream into action. People, like Dr. King, who have lived their lives with purpose.

Rosa Parks’s only purpose on a cold December day 48 years ago was to not give up her seat on a crowded bus. She didn’t realize it then, but her purpose became the spark that ignited the issue of civil rights in America. In 1955 in Montgomery, Alabama, a black woman was expected to give up her seat for a white passenger. But after a long day’s work and a long life of discrimination, Rosa Parks was tired. She said, "I was not tired physically, or no more tired than I usually was at the end of the day. No, the only tired I was, was tired of giving in."

The day she decided not to give in will live forever as the day a humble woman tore down segregation in the South - all with the simple word, "No". Rosa Parks inspired an entire community to not give in anymore. I can only imagine what Rosa Parks felt that day. Or the very next day when she boarded a bus, and for the first time, sat anywhere she wanted. I hope she was proud - because after a lifetime of fighting injustice - proud is what she should be. Mrs. Parks could not be with us this evening, but I am pleased that her good friend, Ms. Elaine Eason-Steele, is here on her behalf. We thank Mrs. Parks for her courage and her commitment. She is a testament to the extraordinary power each of us has to effect change when we do what we know is right.

For our second honoree, what was right the day of April 8, 1974 was Al Downing’s fastball. “Hammerin” Hank Aaron is the greatest homerun hitter in Major League history. He used his love of baseball to shatter racial inequality in sports. He entered the major leagues in 1954, just eight years after Jackie Robinson broke the color barrier. He hit his first home run that same year and didn’t stop until he surpassed Babe’s homerun record. His determination and talent made him one of baseball’s best. But the color of his skin and his quest to beat the record made him one of the least liked. Aaron received more than 3,000 letters a day – mostly letters of hate. But this did not stop him from making history.

On that day in April, the largest crowd in Braves history gathered to watch Aaron hit his 715th homerun, breaking the Babe’s record. This moment has been declared by many as the greatest in the history of baseball. Aaron later said, “I feel especially proud to be standing here where some years ago Jackie Robinson and Roy Campanella proved the way and made it possible for me and for other blacks, hopeful in baseball. They proved to the world that a man's ability is limited only by his lack of opportunity.” Mr. Aaron, you too proved the way for countless generations and for this we are eternally grateful.

Countless generations are also grateful that our third honoree, Roy Ayers, began playing boogie-woogie tunes on his piano at the tender age of five. He said he always wanted to spread goodwill through his music. And today, he not only spreads goodwill through his music, but through his compassion and humanitarian work as well. Mr. Ayers has made pilgrimages to Africa to visit with children afflicted with AIDS and to offer his help. He has performed countless benefits to raise awareness and funds for AIDS research. Recently, he recorded a song titled, “No More AIDS,” which will be released later this year. Proceeds from the sale of the song will go towards supporting AIDS charities.

Roy Ayers has been a source of comfort and inspiration here in America as well. He travels across the country visiting school children and talking to them about the dangers of gang violence and drugs. Mr. Ayers, your compassion is as legendary as your music. Thank you for devoting your life to making the world a better place.

From a very young age our fourth honoree, Richard O’Neill, had a purpose in life. Since he was an altar boy growing up in New York, that purpose has been “Service to Mankind.” This principle has guided him throughout a long career in the United States Army and the Army Reserve. It has also guided him as a policeman for nearly 37 years. As Vice President of the Patrolman’s Benevolent Association and a long-standing member of CORE, Richard has worked tirelessly to improve police and community relations here in New York. Thank you, Mr. O’Neill for your service to the people of New York and for a lifetime of “Service to Mankind.”

Let us take a moment to congratulate all four of this year’s CORE honorees. We honor you today in memory of Dr. King. For like Dr. King, each of you faced great adversity. You faced hate and bigotry. But you never gave in. You had courage and conviction – and most of all, you had a purpose. At times, that purpose may not have been clear, but it inspired you to carry on. Dr. King believed that everyone – especially every young person – needs purpose and direction in his or her life.

Just a few months before his death, Dr. King inspired a group of junior high students in Philadelphia to think about their purpose in life. Dr. King asked the students a very important question, “What is your life's blueprint?” He explained that when architects design a new building, they draw a blueprint to guide them in building a strong foundation and structure. The students too, he said, needed a “solid and sound blueprint” to build the structure of their lives. Dr. King said, “Doors are opening to you – doors of opportunities that were not open to your mothers and your fathers – and the great challenge facing you is to be ready to face these doors as they open.”

And that is what this commemoration is all about – a commitment to self and to our fellow Americans. Dr. King knew that lasting achievements in life come only through sacrifice and service. By teaching our children to give of themselves, we teach them the values of tolerance, unity and cooperation – the very values Dr. King exemplified. Today, across the country, Americans remembered Dr. King. They went to work in their communities. They spent time in soup kitchens serving the hungry and in hospitals reading to sick children. They cleaned and beautified schools in their communities. And Americans took time to remember the sacrifices made by Dr. King and by other men and women who shared a purpose and broke barriers before them – people, like our honorees tonight.

We can give our children purpose and a greater sense of direction in their lives. We can help them create a blueprint for achieving their dreams. So that like Rosa Parks, Hank Aaron, Roy Ayers, Richard O’Neill and Dr. Martin Luther King, they too, will be prepared to walk through doors of opportunity and make history.

Martin Luther King said that he did not want to be remembered for his Nobel Peace Prize. He wanted to be remembered as "a drum major" in the march for the American dream. Today, we must recommit ourselves to march in this band – to help our children realize there is more hope in the world than hate – more opportunity that oppression – and more love than loss.

Our instruments are love, education and service. As we teach them about Dr. King, we will teach them service and hope – and they will learn, “His truth is marching on.”