For Immediate Release
Office of the Press Secretary
January 3, 2003

THE PRESIDENT: I'm proud to wear it.

THE PRESIDENT: And I'm proud to wear it in my home state of Texas. (Applause.)

Laura and I are honored to kick off the new year with the soldiers and families of Ft. Hood.

THE PRESIDENT: All Texans are proud that our state is the home to so many fine military units, including the great 1st Calvary Division. (Applause.)

THE PRESIDENT: And the mighty 4th Infantry Division. (Applause.)

THE PRESIDENT: The key ingredients to the home of America's hammer.

THE PRESIDENT: On Christmas Eve I had the honor of calling some of our troops who are around the world, service members, men and women from many bases, including Ft. Hood. I thanked them for serving America so far from home, and far away from their families.

Today, it's my honor to come here to Ft. Hood to thank each and every one of you for the work you do to make sure that our United States Army is second to none. (Applause.)

THE PRESIDENT: We've got more than 1,300 troops from Ft. Hood that are serving abroad and defending our country and keeping the peace -- from Cuba to Kuwait to Korea. Another 1,600 are preparing to deploy abroad. In the months ahead, more soldiers from Ft. Hood may be giving -- given other essential missions. But wherever you serve, or wherever you may be sent, you can know that America is grateful and your Commander-in-Chief is confident in your abilities and proud of your service. (Applause.) 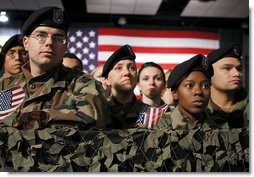 I know we've got some of the many veterans who live in this area with us today. The men and women of Ft. Hood follow in the great traditions that you passed on to them. You each wear a proud title: veteran of the United States military. And I want to thank you for the example you have set and the service you gave to our country. (Applause.)

THE PRESIDENT: And I appreciate and America appreciates the sacrifices of our military families. I signed the largest increase in defense spending in a generation.

THE PRESIDENT: I wanted to make sure that our soldiers had the best possible pay

THE PRESIDENT: -- the best possible training

THE PRESIDENT: -- and to make sure the housing was the best possible for our families, military families. (Applause.) That's the least we owe the husbands and wives of those who wear the uniform.

Each one of you knows that Army life can be rewarding. And you know it can be dangerous and difficult. Every day, our military families are putting America's interests first and America thanks you as well as those who wear the uniform. (Applause.)

Ft. Hood and the units that call it home have a special place in our country's military history. For decades, soldiers from the First Team and the Iron Horse Division, and from other units, have fought America's battles with distinction and courage.

Now you're called again into action, to defend America and the cause of freedom in the first war of the 21st century. For this country, and for our friends around the world who love freedom like we do, the stakes are great. The terrorists have shown what they intend for us. And we're not going to forget.

We're not going to forget the fact that they kill without regard for the rules of war. They don't value innocent life like we do. In America, we say everybody is precious, everybody counts. Everybody is equal in the eyes of the Almighty.

That's not the way the enemy thinks. They don't value innocent life. They're nothing but a bunch of cold-blooded killers, and that's the way we're going to treat them. (Applause.) 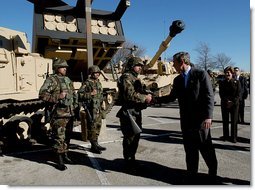 THE PRESIDENT: They reach across oceans to target the innocent. They seek weapons of mass murder on a massive scale. The terrorists will not be stopped by mercy or by conscience. But they will be stopped.

THE PRESIDENT: And they will be stopped by the will and the might of the United States of America. (Applause.)

THE PRESIDENT: Our country is in a great contest of will and purpose. We're being tested. In times of crisis, we will act decisively. And in times of calm, we'll be focused and patient and relentless in our pursuit of the enemy. That's what we owe the American people.

This war, like others, is not going to be won on the defensive. So we're going to take this fight to the enemy.

THE PRESIDENT: We've destroyed camps where terrorists train. They're used to be camps, the United States military showed up -- they're not any camps in Afghanistan.

THE PRESIDENT: We've emptied caves where they hid. See, they used to think they could hide. But you can't hide from the United States of America. You may hide for a brief period of time, but pretty soon we're going to put the spotlight on you, and we'll bring you to justice.

We've cut off millions of dollars that the enemy was using to fund operations. We're working with friends and allies around the world. And we're hauling them in, one by one. Some have met their fate by sudden justice; some are now answering questions at Guantanamo Bay. In either case, they're no longer a problem to the United States of America and our friends. (Applause.)

THE PRESIDENT: We do not yet have all the terrorists, but they're all on the run. And if they listen carefully, they will hear behind them the mighty footsteps of the United States of America. (Applause.) 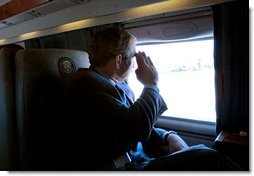 THE PRESIDENT: And we're not quitting. We'll fight this war on many fronts, with many tools. Our intelligence operations are tracking the terrorists. We're sharing intelligence with other countries that share our desire for peace. Our allies are keeping the peace and helping us keep the peace in Afghanistan. We're hunting the terrorists on every continent.

And, as well, we're confronting the threat of outlaw regimes who seek weapons of mass destruction. Different circumstances require different strategies -- from the pressure of diplomacy, to the prospect of force. Yet, in every case, the resolve of our nation is the same: we must, and we will, protect the American people and our friends and allies from catastrophic violence wherever the source, whatever the threat.

In the case of North Korea, the world must continue to speak with one voice, to turn that regime away from its nuclear ambitions. In the case of Iraq, the world has already spoken with one voice. The Iraqi regime has a duty under Security Council resolutions to declare and destroy all of its weapons of mass destruction. That's what the world has said. That's what the United States expects from Saddam Hussein.

Why do I say that? Well, first of all, the leader in Iraq has publicly proclaimed his hatred for our country and what we stand for. The Iraqi regime has a record -- a record of torturing their own people, a brutal record and a record of reckless aggression against those in their neighborhood.

Four years ago, U.N. inspectors concluded that Iraq had failed to amount -- account for large stockpiles of chemical and biological weapons, weapons capable of killing millions. In last month's declaration, Iraq again failed to account for those weapons.

The Iraqi dictator did not even attempt to submit a credible declaration. We can now be certain that he holds the United Nations and the U.N. Security Council and its resolutions in contempt. He really doesn't care about the opinion of mankind. Saddam Hussein was given a path to peace; thus far, he has chosen the path of defiance.

The fate of the Iraqi regime is being determined by its own decisions. Saddam Hussein knows precisely what he can and must do to avoid conflict. We have made that clear. The world has spoken with one voice.

And even now, he could end his defiance and dramatically change directions. He has that choice to make. We certainly prefer voluntary compliance by Iraq. You see, the use of military force is this nation's last option, its last choice.

THE PRESIDENT: We are ready. We're prepared. And should the United States be compelled to act, our troops will be acting in the finest traditions of America, should we be forced to act. Should Saddam Hussein seal his fate by refusing to disarm, by ignoring the opinion of the world, you will be fighting not to conquer anybody, but to liberate people.

See, we believe in freedom. No matter what their oppressors may say, the people of Iraq have no love for tyranny. Like all human beings, they desire and they deserve to live in liberty and to live in dignity. America seeks more than the defeat of terror. We seek the advance of human freedom in a world at peace. That is the charge history has given us, and that is the charge we will keep.

In crucial hours, the success of our cause will depend upon you. As members of our military, you serve this nation's ideals and you demonstrate those ideals in your code and in your character. As Commander-in-Chief, I have come to know the men and women who wear America's uniform. I have seen your love of country and your devotion to a cause larger than yourself. I have seen your discipline, your idealism, and your sense of honor. I know that every order I give can bring a cost. I also know without a doubt that every order I give will be carried out with skill and unselfish courage.

Some crucial hours may lie ahead. We know the challenges and the dangers we face. If this generation of Americans is ready, we accept the burden of leadership, we act in the cause of peace and freedom. And in that cause, we will prevail.