For Immediate Release
Office of the Press Secretary
December 18, 2002

It is my great honor to welcome my good personal friend and a friend of the United States, Jose Maria Aznar to the Casa Blanca. He is one of the world's strongest leaders when it comes to our mutual concerns about keeping the peace and fighting terror. He understands the first -- he understands firsthand the consequences of terror activity. And today, Mr. President, we join you in the mourning of loss of life for a policeman in your country who was killed. 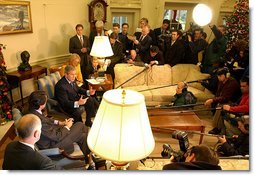 I also want to take a moment to express our deepest sympathy for the people of Galicia. We understand the concern and the heartfelt worry about the effects of the oil spill. President Aznar said, nunca mas. And I believe him. And I want to thank him for his leadership. And I'm glad he's back here.

I'd also like to thank President Bush for his solidarity and particularly for the cooperation shown Spain by all levels of the U.S. administration in the light of the environmental disaster caused by the sunken oil tanker off the coast of Spain.

And can I say that in all the meetings I've had with representatives of your administration we have received offers of unconditional support in helping cope with that disaster, and that support is ongoing and will continue. And I'd like to thank President Bush for the personal impetus that he has given in that cooperation.

Spain and the United States are working together within a framework of very solid and close cooperation and confidence. And I am determined that this will continue to be the case in the future in the fight against terrorism, in the fight against weapons of mass destruction, and in this overriding objective of defending a world of freedom, justice and stability.

PRESIDENT BUSH: I said, I'll see you at the party tonight.

Q I thought that meant questions.

PRESIDENT BUSH: See you at the party tonight.