For Immediate Release
Office of the Press Secretary
December 13, 2002

THE PRESIDENT: Good afternoon. Since our country was attacked 15 months ago, Americans have been forced to prepare for a variety of threats we hope will never come. We have stepped up security at our ports and borders, we've expanded our ability to detect chemical and biological threats, we've increased support for first responders, we made public -- made our public health care system better able to track and treat disease. By preparing at home and by pursuing enemies abroad, we're adding to the security of our nation. I thank the members of my team who are here who are adding to the security of our nation. 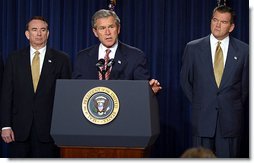 One potential danger to America is the use of the smallpox virus as a weapon of terror. Smallpox is a deadly but preventable disease. Most Americans who are 34 or older had a smallpox vaccination when they were children. By 1972, the risk of smallpox was so remote that routine vaccinations were discontinued in the United States. In 1980, the World Health Organization declared that smallpox had been completely irradiated and, since then, there has not been a single natural case of the disease anywhere in the world.

We know, however, that the smallpox virus still exists in laboratories, and we believe that regimes hostile to the United States may possess this dangerous virus. To protect our citizens in the aftermath of September the 11th, we are evaluating old threats in a new light. Our government has no information that a smallpox attack is imminent. Yet it is prudent to prepare for the possibility that terrorists would kill indiscriminately -- who kill indiscriminately would use diseases as a weapon.

Our public health agencies began preparations more than a year ago. Today, through the hard work of our Department of Health and Human Services, ably led by Tommy Thompson, and state and local officials, America has stockpiled enough vaccine, and is now prepared to inoculate our entire population in the event of a smallpox attack. Americans and anyone who would think of harming Americans can be certain that this nation is ready to respond quickly and effectively to a smallpox emergency or an increase in the level of threat.

Today I am directing additional steps to protect the health of our nation. I'm ordering that the military and other personnel who serve America in high-risk parts of the world receive the smallpox vaccine, men and women who could be on the front lines of a biological attack must be protected.

This particular vaccine does involve a small risk of serious health considerations. As Commander-in-Chief, I do not believe I can ask others to accept this risk unless I am willing to do the same. Therefore I will receive the vaccine along with our military.

These vaccinations are a precaution only and not a response to any information concerning imminent danger. Given the current level of threat and the inherent health risks of the vaccine, we have decided not to initiate a broader vaccination program for all Americans at this time. Neither my family nor my staff will be receiving the vaccine, because our health and national security experts do not believe vaccination is necessary for the general public.

At present, the responsible course is to make careful and thorough preparations in case a broader vaccination program should become necessary in the future. There may be some citizens, however, who insist on being vaccinated now. The public health agencies will work to accommodate them. But that is not our recommendation at this time.

We do recommend vaccinations for one other group of Americans that could be on the front lines of a biological attack. We will make the vaccine available on a voluntary basis to medical professionals and emergency personnel and response teams that would be the first on the scene in a smallpox emergency. These teams would immediately provide vaccine and treatment to Americans in a crisis and, to do this job effectively, members of these teams should be protected against the disease.

I understand that many first responders will have questions before deciding whether to be vaccinated. We will make sure they have the medical advice they need to make an informed decision. Smallpox is a serious disease and we know that our enemies are trying to inflict serious harm. Yet there's no evidence that smallpox imminently threatens this country.

We will continue taking every essential step to guard against the threats to our nation and I deeply appreciate the good efforts of state and local health officials who are facing difficult challenges with great skill. The actions we are taking together will help safeguard the health of our people in a measured and responsible way.