For Immediate Release
Office of the Press Secretary
December 9, 2002

THE PRESIDENT: Good morning. Today I'm pleased to announce my nominee for the Secretary of the Treasury. John Snow has excelled as a business leader, an expert on economic policy, an academic, and as a public servant. He'll be a superb member of my Cabinet.

I also want to welcome Carolyn here today. Thank you for coming. I'm honored your here. 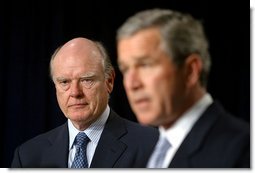 As we look to a new year and a new Congress, John Snow will be a key advisor on the economy and a key advocate for my administration's agenda for growth, new jobs and wider and more international trade.

I'll be proposing specific steps to increase the momentum of our economic recovery, and the Treasury Secretary will be at the center of this effort. I appreciate John's willingness to serve our country.

In a varied and productive career, John Snow has shown consistent qualities of foresight and integrity and public spirit. He's led one our nation's largest railroads with skill and success. He knows firsthand how the economy works. His peers elected him to lead the Business Roundtable, where he was an articulate voice for pro-growth policies.

John has a deep, long-standing commitment to ethical corporate governance. And as the co-chairman of an important commission on public trust and private enterprise, he holds a Ph.D. in economics and has taught in the field. He served in the executive branch under two Presidents.

John returns to public service at an important moment for our economy. Inflation is firmly under control, which keeps the cost of food, clothing and other necessities more affordable. Mortgage rates interest remain at historic lows, making home prices more reasonable for millions of Americans. A 5.6 percent increase in productivity over the last four quarters is the biggest of any comparable period since 1973. And growth has returned to the American economy.

Yet, we also face specific challenges that could slow the recovery and limit future growth. Parts of America are expecting -- are experiencing persistent unemployment. Many Americans have very little money leftover after taxes. Some struggle under a weight of debt that makes is difficult to save for retirement. Investor confidence needs to be strengthened in practical ways.

The new Congress will have a responsibility to address these challenges. My administration will make specific proposals as how best to address these challenges. I look forward to working with John Snow, as we move forward on a growth and jobs package. He and I share a basic conviction: we believe the strength of our economy lies in the unmatched enterprise and creativity and hard work of the America people.

It is the task of government to create an environment in which these qualities are rewarded and where jobs are generated, especially by small businesses in America. My administration has acted on these principles, and we will continue to do so. John will be the senior member of a new economic team.

From the day I took office, I've been fortunate to have outstanding economic advisors at the Treasury Department and in the White House. I'm deeply grateful to Secretary Paul O'Neill and Dr. Larry Lindsey for their leadership, particularly in the aftermath of September the 11th, 2001. They share credit for an historic tax relief and other economic policies that moved our economy from recession to growth.

Paul and Larry are two of the most fine, honorable, decent men I've ever served with. They can be proud for all they have done for their country.

There is important work ahead to bring greater economic growth in the new year. This economy is strong, and we can make it stronger. I'm eager for the task, and so is our next Secretary of the Treasury. And I hope the United States Senate will act quickly to confirm John Snow.

MR. SNOW: Thank you, Mr. President. Thank you very much, Mr. President, for those very kind and generous comments. I'm both humbled and deeply honored by your decision selecting me as your Secretary of the Treasury. Should the United States Senate confirm me, I look forward to joining your economic team to advance a pro-growth, pro-jobs agenda.

As you noted, this is an important moment for the economy. Thanks to your leadership and this administration's stewardship of the economy during a tough time, the recession was one of the shortest and shallowest in modern, economic history.

Yet, I strongly share your view that we cannot be satisfied until everyone -- every single person who is unemployed and seeking a job -- has an opportunity to work. I pledge to you to use all my talents, my power, my energy and my ability to strengthen the current economic recovery and create an environment where millions of job-creators -- those small businesses and partnerships and medium-sized businesses and large businesses -- and investors, all across America, will grow and prosper.

I also understand the importance of working closely with other countries to build and maintain a prosperous, growing and stable global economy as we successfully prosecute the war on terror.

Mr. President, 25 years ago I left government service with the hope that one day I might be able to return. You have given me an opportunity to do so, and I intend to make the most of it. Thank you very much.

THE PRESIDENT: Thank you, all. (Applause.)